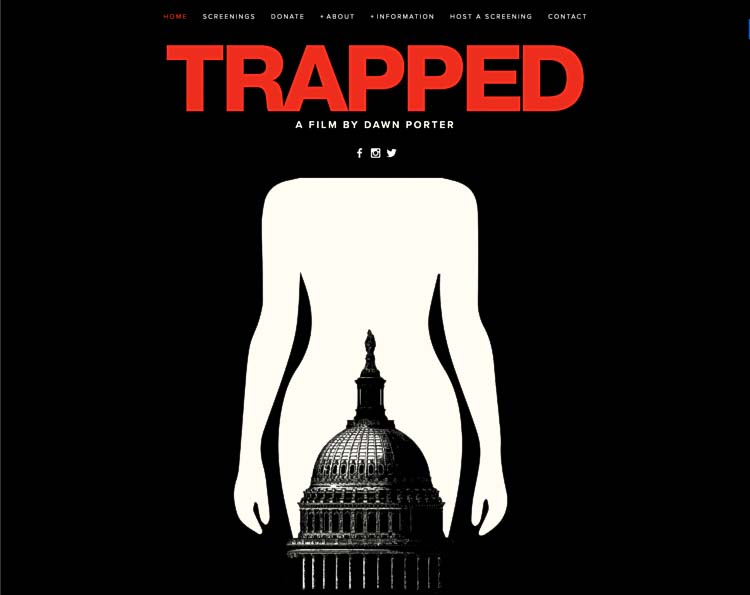 The weekend-long event took place between April 29 and May 1 and was composed of a multitude of events including a networking reception, panel discussions, workshops, a film screening of the “Trapped,” and other activities.

“The students and alumnae of Rho Ep invite you to join us in celebrating the fifth anniversary of our founding with a weekend of programming on campus designed to pay tribute to women’s progress and inspire future efforts towards equity for all at Wesleyan and beyond,” read the Facebook description of the event.

The event opened on Friday evening with the screening of the film “Trapped,” followed by a discussion with the producer of the film, Marilyn Ness, who answered questions about why she chose to work on the film, difficulties that she encountered while working on it such as funding, and what it is like to be a woman in the film industry.

“‘Trapped’ is an incredibly relevant film and I am so grateful that we had the opportunity to screen it,” Rho Ep president Lili Kadets ’17 wrote in an email to The Argus. “I believe it was important to screen the documentary for a number of reasons. First, the film’s discussion of policy is extremely pertinent to the upcoming elections. Secondly, I think that there are a lot of documentaries out there on the topic of abortion, but perhaps few that have captured issues of abortion at a moment in history when state laws are changing so dramatically. Thirdly, I wanted to show the film because abortion isn’t just a ‘women’s issue,’ it’s an issue that everyone should be talking about.”

The weekend continued on Saturday with more activities and panels. One of these discussions was the Wesleyan Women Then & Now panel. The speakers in the panel were University alumna Jay Benedith ’14, Betti Packman ’07, Olivia Mason ’15, and Sam Santaniello ’13. Their discussion revolved around their time at the University and how they transitioned into the working world and beyond.

“Discussion topics [also] included gender inequalities at Wesleyan and in the workplace, mentorship, sexism from co-workers and bosses, ambition and assertiveness, academic and professional exploration, and many others,” Kadets wrote. “We chose this panel because we wanted to get a sense of how one’s experiences as a woman at Wesleyan might shape, or perhaps might not shape, our experiences throughout post-grad life.”

Another part of the event that occurred on Saturday was a Collective Discussion between current members and alumnae of Rho Ep. Together they discussed the reasons for founding their organization five years ago, the progress they have made since then, and the goals they hope to achieve in the future.

“The discussion was very successful, as it gave us a chance to evaluate our role on campus in fostering a safe space for all female-identifying students,” Kadets wrote. “Of course, we’ve made a lot of progress since our founding in 2011; nevertheless, we are constantly looking for ways to improve and extend our mission across campus.”

Rho Epsilon secretary Linne Halpern ’18 agreed with these sentiments about the discussion.

“I was really excited about the conversations happening regarding Rho Epsilon Pi’s strength of place on our campus as we celebrate our fifth anniversary,” Halpern said. “I was thrilled to partner with so many other amazing women’s groups on campus to pull off these events and show support for our fellow female identifying organizations.”

The weekend closed on Sunday with two different workshops. The first was about activism and was led by Nina Gurak ’16 and Claire Wright ’16.

“We chose this workshop because we felt it was important to give students an idea of the various ways of ‘doing’ activism on campus and beyond,” Kadets wrote. “[Gurak] and [Wright] did a great job in engaging participants with discussion and encouraged personal story-telling.”

The second workshop, titled “The Future of Female Filmmaking” was led by the women of Cardinal Pictures. Ali Arminio ’18, Emily Feher ’17, Isabella FitzGerald Harewood ’17, Ruby Lanet ’18, and Sarah Wax ’18 all spoke about the role of women in the film industry, female representation on the screen, and what it’s like to be a female-identifying filmmaker at the University.

“We were lucky to hear some first-hand experiences from students that have created films on campus,” Kadets wrote. “We are thrilled to have collaborated with Cardinal Pictures, as we wanted to foster connections with a variety of student groups. Also, there are a lot of students at Wes interested in film and we thought that this would be a great outlet for discussion.”

Rho Ep member Jenna Shelby-Glick ’19 attended the conference and felt that the message it helped spread was an impactful one.

“I think that the Wesleyan Women’s Conference this weekend was a great way to encourage women’s leadership both at Wesleyan and past graduation,” Shelby-Glick said. “The workshop on activism reinforced my desire to be an active and engaged participant in the Wesleyan community. In addition, after seeing the Then & Now Panel with recent graduates, I felt empowered to take on meaningful and impactful projects after graduation.”

“I think the event was a huge success,” Skopicki said. “It really brought together women’s groups from all different sides of campus and united us under a common goal of celebrating women’s accomplishments. I think it’s really important for women to feel they have a space on campus and this event, at least for me, really showed that well.”

Similary, Kadets felt that the most rewarding aspect of the conference was having the ability to offer a space for conversation on a variety of issues relating to women on this campus and beyond.

“There are few opportunities for us to sit down for an extended period of time and engage in these types of discussions, especially when they are difficult, complex, and sensitive,” Kadets wrote. “Being a woman on this campus and in the ‘real world’ isn’t always easy, I think it’s important that we acknowledge the ways in which we can work together to find solutions.”

Although this is the first Wesleyan Women’s Conference that has been hosted at the University, members of Rho Ep hopes that it will not be the last.

“I hope that we can continue this discussion,” Kadets wrote. “I also hope that this event reflects the ways in which Rho Epsilon Pi is eager to contribute to the greater Wesleyan community. We only want to continue building relationships with all groups on campus in an effort to spark conversation and grow.”