Night Cheese, Washing Machines, and the Pursuit of Happiness: The Evolution of “30 Rock” 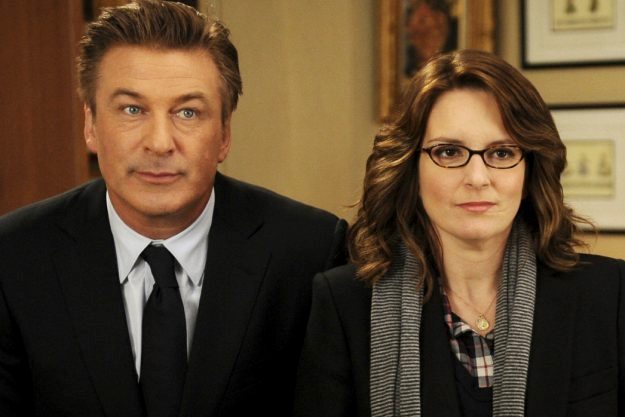 One of the greatest TV sitcoms of all time, “30 Rock” also had one of the strangest evolutions of any show ever. Most great shows peak mid-way through their run, with later seasons becoming increasingly dull and distanced from what made the show great in the first place. While later seasons of “30 Rock” are dramatically different from earlier ones, the series manages to retain its remarkable quality throughout. It begins as a semi-serious behind-the-scenes look at TV production, but it ends as one of the most absurd shows on television. What keeps it so strong throughout, aside from the comedy chops of Fey and her cast, is its commitment to exploring the difficulty of finding, and keeping, happiness.

The show’s first season is both its weakest and most grounded. Its pilot episode revolves around the struggles of sketch comedy writer Liz Lemon (Fey), whose life is turned upside down when her new boss, Jack Donaghy (Alec Baldwin) forces her to work with celebrity comedian Tracy Jordan (Tracy Morgan, parodying himself). The first episode is a disappointment: The jokes don’t land as hard as they should, the characters are poorly defined, and there is very little reason to care about any of them.

Unfortunately, these problems plague the first few episodes of “30 Rock.” It isn’t until episode 7, entitled “Tracy Does Conan,” that the show finally becomes willing to experiment with ridiculousness. Tracy, selected by Jack to appear on “Late Night with Conan O’Brien,” begins acting bizarrely after not taking his medication correctly. Liz calls on Tracy’s doctor, Leo Spaceman (Chris Parnell in his first appearance as one of the best characters on “30 Rock”). Tracy’s odd behavior provides the basis for later insanity on the show, while the plot provides a structural grounding for future episodes. Liz runs around helping out nearly all of her co-workers, all while trying to eat something to compensate for donating her blood earlier in the day. Sub-plots intersect with each other to provide creative and clever punch lines. At the same time, Liz struggles with the idea of breaking up with her boyfriend, who makes her miserable. The stage is set for “30 Rock’s” transformation.

As the ridiculousness increases, the show’s characters become more defined, nuanced, and goofy. Jack develops into a caricature of business executives and an endlessly quotable scene-stealer. Tracy evolves from an egotistical nuisance to a puppy-like, idiotic charmer. Jenna Maroney (Jane Krakowski), who the show initially uses as nothing more than Liz’s friend, becomes a brilliant send-up of self-centered and talentless actresses. NBC page Kenneth (Jack McBrayer) becomes a perpetually mockable and well-intentioned sidekick to Tracy. Liz remains fundamentally the same, caught in an endless cycle of bad relationships, absurd work problems, and more. Yet, now that she is offset by her eccentric cohorts, her character works.

Alongside the development and deepening of the characters, the plot lines grow increasingly ridiculous, all underpinned with the unending quest for happiness. This is perhaps best exemplified by the Season 3 episode “Apollo, Apollo.” Jack, upon turning 50 and having achieved everything in life that he wanted to as a child, still feels incomplete and unhappy. So he tries to recreate the extreme joy he felt as a child upon receiving a model spaceship, a moment that made him so happy he vomited. (“What? As a kid you never got so excited you vomited?”). He finds the old gift, but quickly gives it away, as it no longer makes him happy.

But Jack’s “Mad Men”-esque contemplation is too depressing on its own, so the writers throw in a subplot in which the cast and crew of “The Girlie Show” (the show within the show that Liz Lemon runs, an un-subtle parody of “Saturday Night Live”) fake a space launch on the set of their show for Tracy, so they can fulfill his childhood dreams. One of the show’s best episodes, “Apollo, Apollo” is able to deftly balance tragic, complex conflicts with goofy comedy. It also grants its characters brief moments of happiness. Jack, in the end, does get to relive his childhood joy, vomiting of laughter after watching an ad for a phone sex line that features a young and incredibly awkward Liz Lemon.

Eventually, by the fifth season, the struggle to find happiness becomes a problem for even Tracy, the least serious character on the show. After earning his EGOT (an Emmy, Grammy, Oscar and Tony) by winning an Oscar for his dramatic film about poverty, “Hard to Watch,” Tracy becomes overwhelmed by the responsibility and maturity people now expect of him. So, he claims to run off to Africa (really, he hides in the undeveloped part of Liz’s apartment), and when he returns, everyone refuses to treat him like the offensive, idiotic comedian he is. Every absurd comment of his is treated like the musings of a method actor (“It’s because you didn’t feel like your authentic self, that you walked away from success,” Matt Lauer tells Tracy. “That’s actually very brave, don’t you think?” Tracy’s response: “No! It’s unbrave! You should hate me.”) Of course, Tracy’s industry friends tell him that if he wants to be disrespected, he simply has to do television again.

The show, from there, finds ways to get even more absurd: Jack’s wife is kidnapped by North Korea; Tracy stages a protest demanding that idiots be taken seriously; Jack considers running for mayor of New York (not unlike Baldwin himself); Jack commissions a TV-movie about his wife’s kidnapping; Jenna is placed in a position in which she can potentially determine the next president of the U.S.; Dotcom reveals he performed in “The Seagull” at Wesleyan; etcetera. And underneath it all, everyone’s still struggling to be happy.

Whereas most shows fail to deliver finales that capitalize on everything that made them great to begin with, “30 Rock” accomplishes this to a T. The two-part finale, entitled “Hogcock!/Last Lunch,” is ridiculous, funny, quotable, and delicately sentimental. Jack, having achieved all his career goals (and then some), feels oddly depressed about his life (sound familiar?). Liz is contractually obligated to do one last “TGS,” even though Tracy tries to stop the show from happening at any cost. Liz’s writing staff attempts to prevent one of its members from forcing them to all eat Blimpies sandwiches for their last lunch. Liz confronts the possibility that Jack’s mentorship has wasted her life, leading her to believe that she could find happiness purely from her job.

Much of the finale is about the difficulty of saying goodbye, with all the complex emotions that come with it. Tracy tries to stop the last “TGS” because everyone in his life tends to leave him forever, and he cannot bear the idea of leaving his friends, so Liz confronts him about his evasion at Tracy’s favorite strip club, naturally, in a brief throwback reference to the show’s pilot. Liz has always been exhausted and frustrated by Tracy’s insanity, yet she doesn’t hate him. “Because the human heart is not properly connected to the human brain,” she tells Tracy, “I love you, and I’m gonna miss you.” It’s the kind of heartbreakingly honest sentiment that many sitcom finales go for but never achieve.

But the core of the finale is about what, really, the entire show was about: the relationship between Jack and Liz, and the hardships of pursuing happiness. Liz realizes that her job as a comedy writer, for all its downsides, is what makes her happy. Jack, after a fight with Liz, decides to make her believe that he’s about to commit suicide in order to convince her that the two truly care about each other. He lures Liz to the Manhattan Bay, where he reveals he’s about to go on a boat trip to discover who he is. They finally admit their mutual (platonic) love for each other. And Jack sails off, to find out who he truly is…

Until he turns around quickly, having come up with a brilliant idea. “Clear dishwashers!” Jack shouts to Liz. “Clear dishwashers, so you can see what’s going on inside it! It’s the best idea I’ve ever had. Thank God I took that boat trip.”

As per usual, “30 Rock” finishes by taking the goofy route rather than the realistic one. But it’s all the better for it.