A Mixture of Entertainment and Politics: Visiting a Trump Rally in Hartford 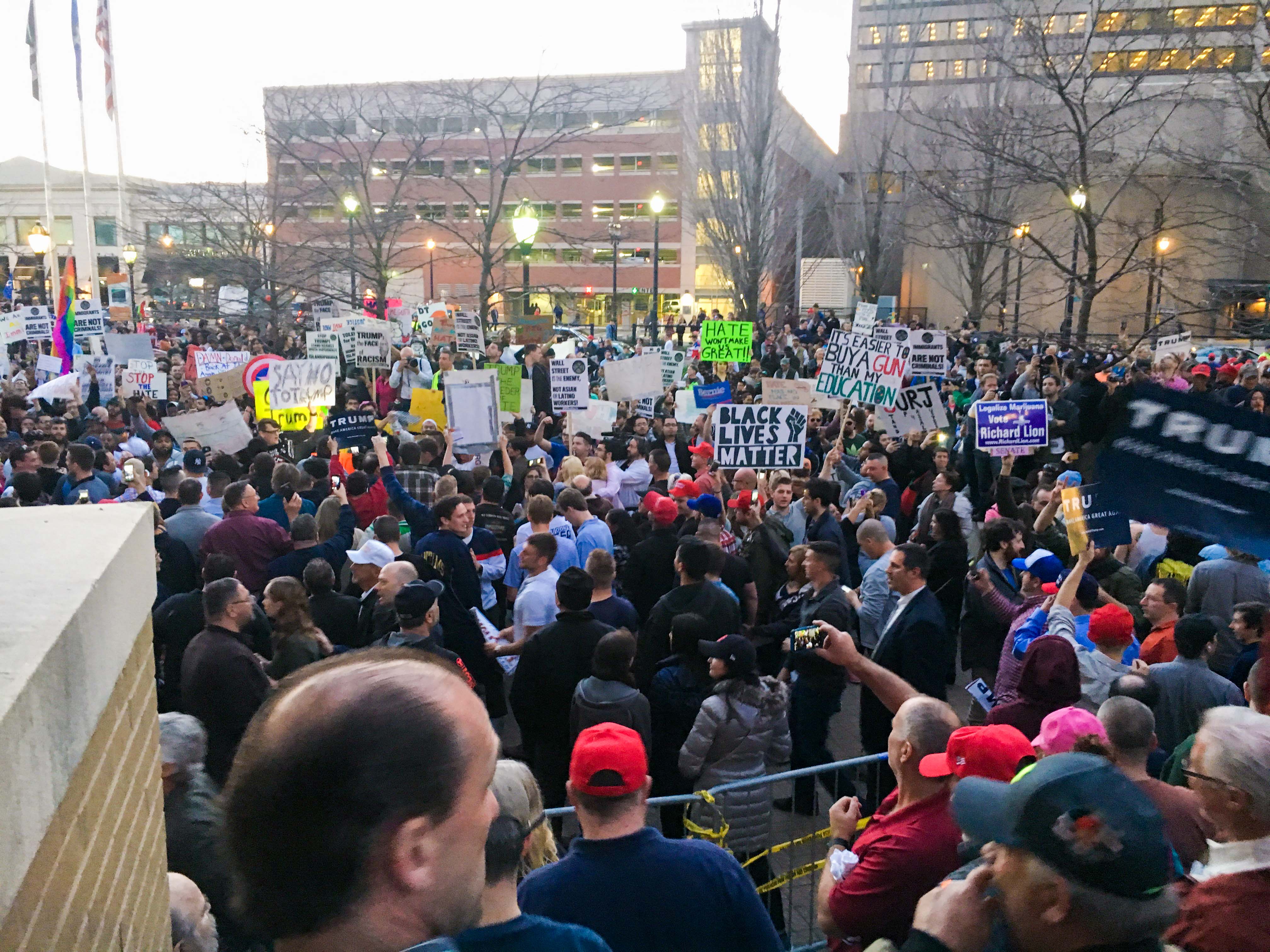 When I arrived at a Donald Trump rally in Hartford on Friday, I wasn’t expecting the speakers to blare standard political campaign fare. After all, a volunteer at one rally described the playlist to Ryan Lizza, the Washington correspondent for the New Yorker, like this: “The more inappropriate for a political event, the better.”

So sure, I was prepared to hear a collection of British songs in advance of a speech celebrating American protectionism. Why not?

But I wasn’t prepared—though I likely should have been—for the irony of the set list. As I entered the room, the speakers were playing “You Can’t Always Get What You Want.” Please, I thought: the supporters in the room were about to get exactly what they wanted, and none of what they needed.

From an appearance on Saturday Night Live to an exchange with former presidential candidate Marco Rubio over the size of his hands, Trump’s campaign has been about entertainment as much as it’s been about policy and political rhetoric. True to form, his rally felt like a surreal, uncomfortable combination of a sporting event and a political rally.

Outside the Hartford Convention Center, where Trump was set to speak, street vendors lined the sidewalks. They sold Trump everything: Trump hats, Trump pins, Trump jerseys. In large numbers, Trump’s supporters bought it. One fan, apparently enthralled with the fanfare of the event, bought a Trump mask, which at least one vendor sold.

Even in the circus outside the convention center though, there was a sense of how connected the entertainment and the politics really were. Protesters stood between the parking garage I came from, and the line to the rally, holding up signs decrying Trump’s attitude toward immigrants.

And then there were the simple visuals of the event. The street vendors were almost all black, young men. The protesters were, with only a few exceptions, young. Many were black or Latino. By contrast, as I walked into the line that led to the rally, I encountered a sea of white, mostly male, faces.

Trump took the stage promptly at 7 p.m., when the event was slated to start. The crowd had begged for Trump’s arrival during every silence between songs in the playlist; now, they erupted in cheers. They had finally seen their rock star politician.

Trump acted the part of a rock star, too, providing the crowd with all the one-liners they came expecting. “We’re going to build a wall,” he said. “And Mexico’s going to pay for it.” Since the primary race has increasingly become a two-way battle between Trump and Senator Ted Cruz, Trump referred consistently to “Lyin’ Ted Cruz.” A couple of times, it sounded like Trump almost forgot his nickname to Cruz. “And then there’s Ted Cruz,” he’d say, before pausing. “Lyin’ Ted Cruz.” Each time, the crowd cheered.

Trump spent most of the time deriding the current state of Connecticut and promising to change things. He said that, as governor, he wouldn’t have let General Electric move its headquarters to Boston; and that, as president, he’ll create an economic recovery and solve the heroin epidemic.

During these moments, in which he criticized the current political state of the U.S. and made promises for change, the audience stayed largely quiet. They perked up, instead, at the catch phrases.

Trump received huge cheers when he pointed to a part of the convention center the organizers had cordoned off for the press.

“These are the most dishonest people in America,” he said.

In this way, Trump managed his audience, grabbing their attention after it had ebbed during the parts of the speech that almost resembled substance.

And, as might be predicted, Trump did not always stick closely to fact. He claimed that there were at least 10,000 people in attendance, despite the 8,800-person capacity of the room. (Corey Lewandowski, Trump’s campaign manager, guessed that the crowd had about 5,500 people in it. Another 1,000 could not fit inside, according to Hartford Deputy Police Chief Brian Foley.)

At one point, Trump praised Hartford for not having any protesters interrupting him, minutes after he called a group of protesters “dummies” and yelled “Get ‘em out.”

Then, a half hour after he began speaking, Trump stopped. One supporter, speaking to Trump’s celebrity status, complained, asking why he had to wait for over an hour in order to only see Trump speak for 30 minutes.

And just like that, the entertaining part of the event was replaced by tense politics. Groups of protesters stood outside the Convention Center, yelling “Racists! Go home!” and “Black Lives Matter!” Supporters shot back with chants of “Get a job!” “Get a hobby!” and “U-S-A!”

At several points, the crowd of white Trump supporters seemed on the verge of fighting the protesters. Police officers slowly forced supporters and protesters closer to the street, trying to end the shouting matches as quickly as possible.

The scene was surreal. Just minutes after I saw an audience receive a dose of entertainment from a politician who was pandering to all of their desires, I was faced with two groups of people who resisted each other on every point. When one protester stated that he had things in common with the Trump supporters, one of the supporters responded that their only commonality was their mutual hatred.

The event, seemingly, was a microcosm of this political campaign season. The environment was vitriolic and angry. And yet, there was a cruel sense of entertainment beneath it all.