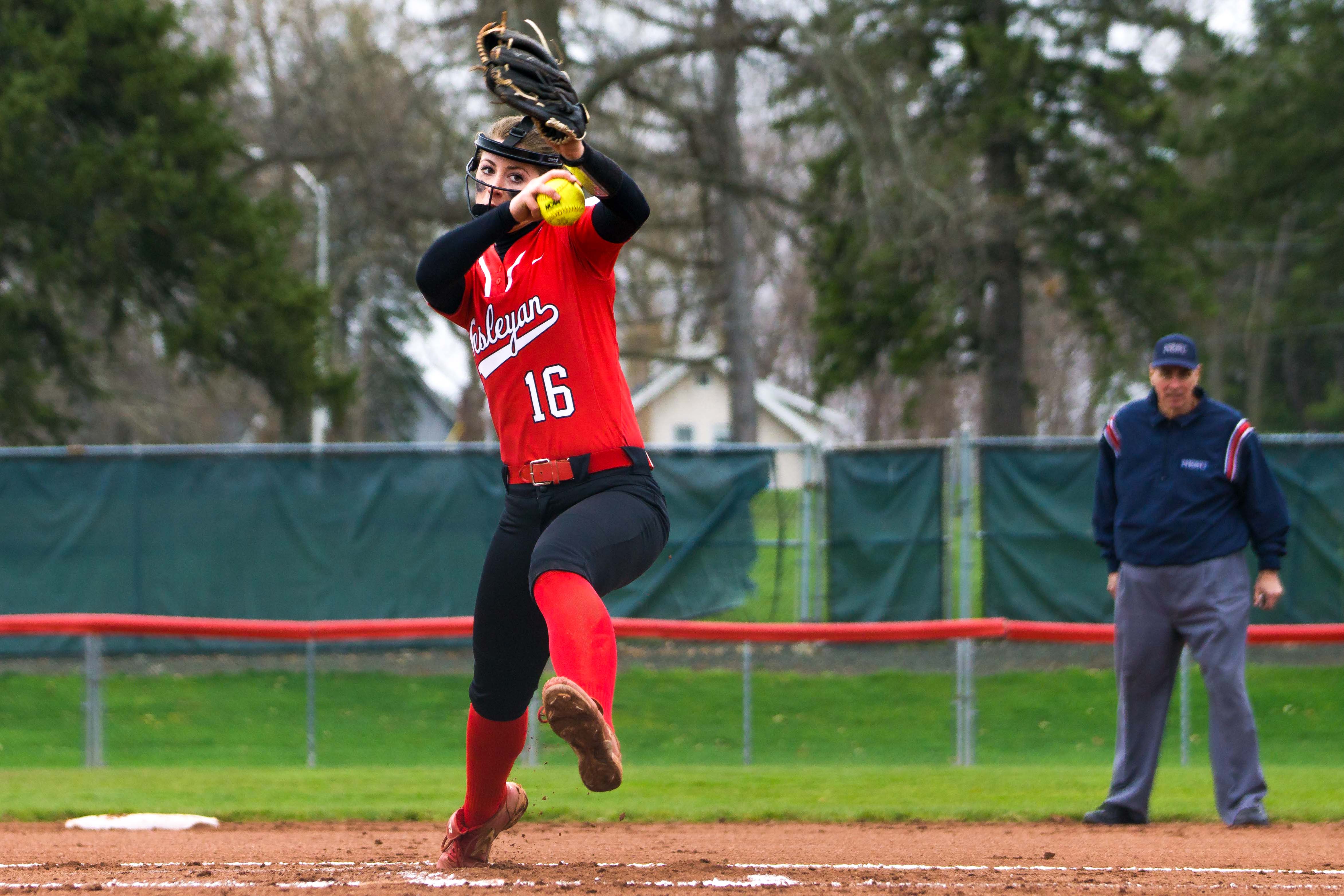 The softball team finds itself treading in deep water after recording a 2-3 record in five games this past weekend. Back-to-back 8-0 performances against Hamilton on Sunday were impressive, but after getting swept by Williams in a three-game series on Friday and Saturday, the Cardinals (16-9, 2-4 NESCAC) sit tied for third in NESCAC West play. Wes and the Continentals both own a wins to losses ratio of 2-4, while Amherst and Williams are each off to fast starts at 4-1 and 3-0, respectively. The top-two teams from the division qualify for the postseason.

Tied 1-1 after the first finning, Pardo helped her own cause by sending one past the fences, and later in the frame, Jaime Hom ’17 singled home Annalie Walsh-Costello ’17 to take a 3-1 advantage. The Ephs would regain the lead in the bottom half of the inning, plating three runs on a two RBI double and an RBI single.

The top of the third saw the Cardinals retake the lead, scoring two off of a Walsh-Costello RBI single and a sacrifice fly from captain Mollie Grunat ’16.

Pardo would throw a clean top of the third, but one inning later, the Purple and Gold added two of their own, giving them a 6-5 lead. Lead changes were apparent throughout this contest, and in the top of the fifth, Hom roped a two RBI triple to left field, scoring Izzy Linzer ’17 and Grunat.

The Cards could not keep the Ephs off of the scoreboard in the bottom half of the fifth inning. Williams sent the game-tying run across the plate off of a ground out. Offense would finally slow down for the next three innings, until a walk-off home run from Williams sent the demoralized Cardinals to bed, needing to regroup and prepare for the double header that would loom on Saturday.

The outcome in the second contest of the three-game series would be just as tough for the Cardinals to swallow. This time, finding offense was few and far between, as the Ephs snuck out a 1-0 victory.

Julie McDonald ’18 pitched six strong innings, allowing one run on eight hits, striking out four and not giving up any free passes onto the bases. Her only mistake of the day proved to be costly, as a solo home run to left field in the bottom of the fifth for the Ephs won the ballgame.

Eph starter Alejandra Magana threw six innings of scoreless softball, giving up seven hits and striking out two. Mackenzie Murphy appeared in relief to get the three-out save, only giving up one hit. Rachel Kantor ’19 and Olivia Gorman ’19 were the only Cardinals to record multi-hit games.

In the rubber game of the series, the Cardinals could not stay with the Ephs like they did in the first two contests. Kantor dealt for 4.1 innings, striking out one and allowing four walks. She gave up six runs on six hits, and a problematic fifth inning led to her exit. Pardo came in and got the last five outs, three of those coming on strikeouts, but at that point, the deficit was too large to overcome.

Down 1-0 after two, Linzer tripled to right field, which brought home Gorman and tied the game. Williams would take a 2-1 lead after an RBI double in the bottom of the fourth, and then the fifth inning arrived.

The Ephs posted a giant four on the board in this inning, coming off of a two RBI double, followed by an RBI single, and then another RBI single. Williams’ pitcher Brooke Bovier was outstanding, and not including the Linzer triple, she was as good as it gets. Bovier struck out just two and walked one in seven innings of action, but she only gave up four hits out of the 27 batters she faced. Linzer had two of the four hits, while Gorman tacked on one, and McDonald supplied the remaining hit.

The Cardinals rebounded this past Sunday, beating Hamilton by a combined 16-0 in two games. Only needing five innings to get the job done, McDonald allowed two hits and struck out six.

In the bottom of the first, McDonald gave herself run support with an RBI single, plating Linzer. Rielly Wieners ’17 would draw a bases loaded walk later in the inning to double Wesleyan’s lead to two.

The following inning saw Gorman place an RBI single to left field, scoring Grunat. The fourth inning was Wes’ time to shine. Pitching accuracy for the Continentals was weak, as Grunat, Linzer, and then Gorman each scored via a passed ball. A Kantor double to right field and a Wieners single to center field would supply the Cardinals with an 8-0 advantage, more than McDonald could ask for on her Christmas wish list.

Pardo did not get cheated by her teammates in the second game of the double header as she also received eight runs of offense. In the bottom of the second, Grunat scored off of an error by the Continentals’ shortstop, and Kantor would arrive home following a double from captain Amanda Roosa ’16.

A sixth inning breakthrough from Wes would decide the game, as six runs were put on the board. Gorman and McDonald each had an RBI single, and Kantor and Roosa both doubled in two runs.

Pardo was great on the bump, allowing five hits over six innings and striking out two batters. Roosa continued her hot hitting with a three-hit game, the only Wes player with more than one.

The Cardinals continue their 2016 campaign this weekend with a three-game series at Middlebury. The Panthers sit at the bottom of the NESCAC West at 0-2, so the Wes women are confident that they can come home with some victories. Due to inclement weather, the Cardinals will not be playing today in a non-conference double header versus Eastern Connecticut State University. Wesleyan is 18-25 all-time versus the lone NESCAC school from Vermont, and the Cards picked up a 2-1 victory last season at home versus the Panthers.