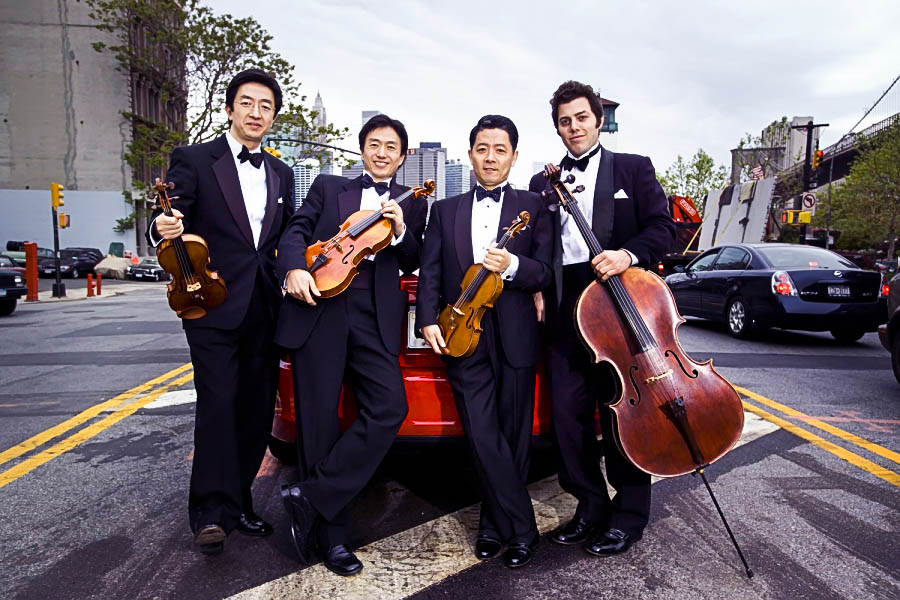 This year’s Crowell Concert Series came to a close last Friday, April 1 with a powerful selection of traditional Chinese folk songs and popular Chinese compositions arranged for the pipa (a four-stringed Chinese instrument) and string quartet. The evening was opened by a pre-concert talk given by Associate Professor of Music Su Zheng, on the history of the pipa as a traditional Chinese instrument and on the significance of the relationship between the pipa and the string quartet. Following the talk, the concert was introduced by Wesleyan’s Center for the Arts (ACFA) director Pamela Tatge, who gave an emotional introduction after announcing her retirement from Wesleyan and her moving on to a new chapter in her work.

The show took on the form of a European classical music concert with violinists Weigang Li and Yi-Wen Jiang, Honggang Li on viola, Nicholas Tzavaras on cello, and Wu Man on pipa. The quartet appeared onstage alone for the first piece, playing a selection of works from a 1963 composition called “China Song” that was rearranged by Quartet member Jiang. The piece consisted of three sections of the Yao Dance, Shepherds and Harvest Celebration, each telling a story through the music. The stark contrasts in musical texture throughout the performance, from the soft pizzicato of the viola and cello in the beginning to the melodic and danceable middle, all the way through the louder vivacious coda, evoked the emotion of the stories and their characters.

The Quartet then left the stage making way for Wu Man, who entered to a large round of applause. During a traditional Chinese solo piece, her virtuosic musician skills echoed around the silent hall and her expression of range and dynamic was seamless and beautiful.

The string quartet re-entered the stage to join Wu Man for the following piece, entitled “Red Lantern,” which was composed by Chinese film music writer Lin Zhao.“Red Lantern” was written especially for Wu Man and the Shanghai String Quartet, and it consists of a suite of stories which take place in a traditional Chinese private courtyard. The performers invited the audience to place themselves in an imaginary courtyard and to try and experience the feelings and emotions of the family members living there through the music.

This last piece made for a calming entrance into the intermission, where a surprise presentation for Tatge took place. The second half of the concert opened with a concerto for the string quartet and pipes, written by Tan Dun. The piece is a five-movement work depicting the loss of human spirituality due to the ever-increasing urban culture and the rapid advances in technology. It was almost as though the madness of urban society could be felt through the vigorous music and the agitated shouts of the performers.

The concert came to a close with a European classical piece, “Beethoven’s String Quartet in C Minor,” which ended the evening and brought about a standing ovation.

I think it’s safe to say that this year’s Crowell Concert Series came to a close with a heart-warming evening of music and emotion, and that Wu Man and the Shanghai Quartet achieved their goal of making Chinese music accessible for and enjoyable to everyone in the audience.