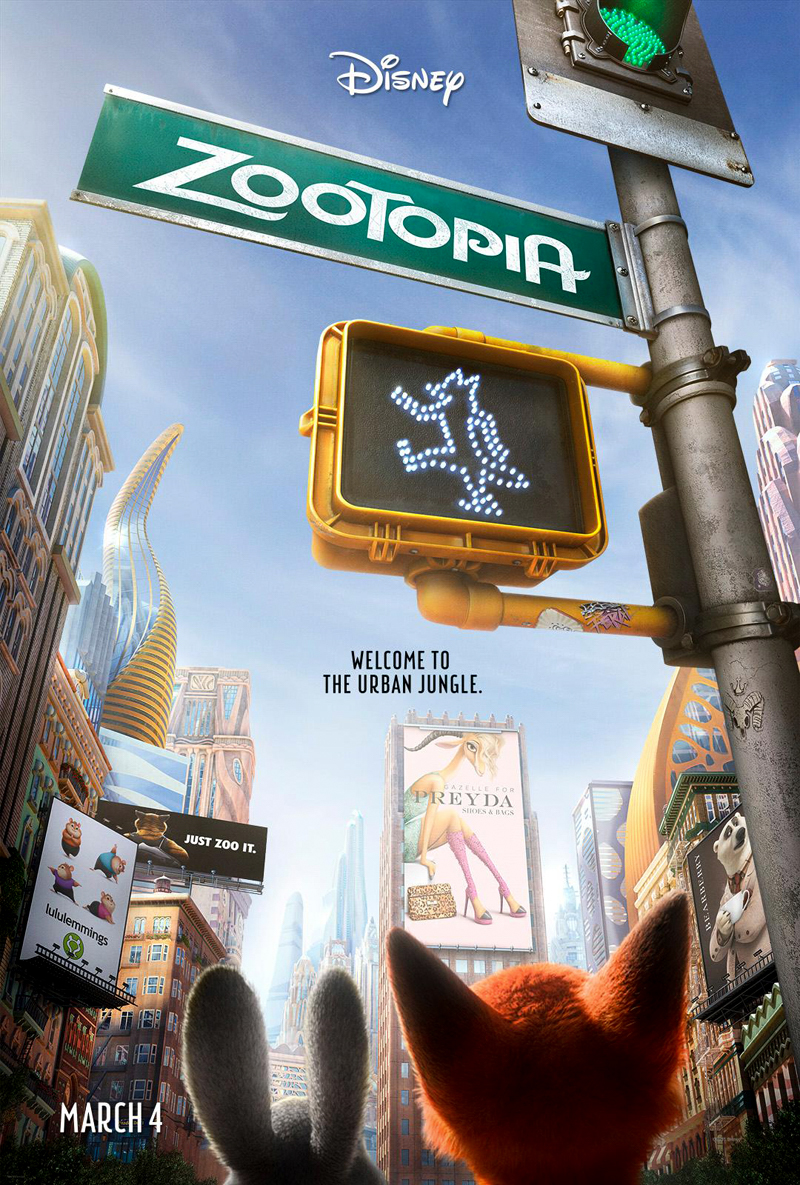 “Zootopia” is the latest title from Walt Disney Animation Studios, and it has taken the film industry by storm. When it comes to animated features, Disney’s branding is enough to draw millions of people to theaters around the world. However, only a few of these titles have managed to unanimously capture the hearts of the audience and critics.

Set in a world without humans, “Zootopia” showcases the evolution of animals into intelligent beings that can co-exist beyond their binary predator/prey natures. It explores concepts and makes cultural references that reflect various (and often controversial) aspects of human society such as race, class, and gender. The protagonist, Judy Hopps (Ginnifer Goodwin), aspires to be the first rabbit police officer serving the city of Zootopia, where thousands of predators and prey animals live together in a seemingly harmonious society.

After years of training under Zootopia’s new Mammal Inclusion Initiative, Judy graduates from the police academy and is stationed in downtown Zootopia by the city’s Mayor Lionheart (J.K. Simmons). One step closer to fulfilling her dream of making the world a better place, Judy says goodbye to her worrying parents, who work as carrot farmers in the rural town of Bunnyburrow.

Unfortunately, Zootopia does not turn out to be the utopia that Judy had imagined. Encountering discrimination due to her status as the station’s token rabbit officer, Judy is assigned to parking duty despite her lack of interest. Thankfully, giving up is not an option for Judy, and she perseveres through the difficulties of living in Zootopia, from noisy neighbors to angry parking ticket recipients. During one of her early shifts, Judy meets a fox named Nick Wilde (Jason Bateman), a con artist who later becomes her assistant and her only hope of finding the missing Mr. Otterton, a case that will cost Judy her job if she fails to solve it within 48 hours.

“Zootopia” doesn’t throw away its shot at making numerous pop culture references, not to mention allusions to societal tensions, which occur most often when two characters of different species interact and converse. In this world, “only a bunny can call another bunny cute,” as Judy explains to a cheetah misusing the word. It is also considered inappropriate to randomly touch a sheep’s curly hair, as illustrated in a scene where Assistant Mayor Bellwether (Jenny Slate) helps Judy and Nick with their case. Furthermore, don’t be surprised to find sloths fittingly running the DMV, and get ready to be taken by an arctic shrew named Mr. Big, who is by far the best spoof of “The Godfather’s” Don Corleone to date. At the center of the film, however, is the relationship between Judy and Nick, a challenge to maintain in a world where “dumb bunny” and “sly fox” are the stereotypes, and interspecies friendships are almost non-existent.

Accompanying the masterful script is the magical world of Zootopia, where ecosystem-based neighborhoods of Sahara Square, Tundratown, and Rainforest District, to name a few, are designed and animated down to the smallest detail. The skin texture of the many animal species featured in “Zootopia” is reminiscent of the memorable character design in “Inside Out,” and the cityscape is on par with the artistic and technological expertise illustrated by San Fransokyo in “Big Hero 6.” To make an already complete package even more enticing, Shakira sings the original song “Try Everything” (written by Sia and Stargate) and is featured as a character named Gazelle, a celebrity singer and an advocate for social justice among both predator and prey.

With the universal success of “Zootopia,” Disney has once again proved its mastery in telling stories that extend beyond fairytales and snow queens. Oftentimes, what you desire the most comes from the unlikeliest place, and “Zootopia,” with its wide-ranging themes of social justice and equality, is the perfect gift for anyone seeking positive change through the medium of cinema. In an era where Hollywood struggles with diversity and our society is still arguably reluctant to find effective solutions to social injustice, perhaps it’s better to follow the advice of one thoughtful rabbit:

“Life’s a little bit messy. We all make mistakes. No matter what type of animal you are, change starts with you.”