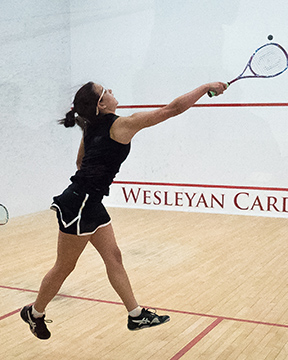 Four athletes from Wesleyan had the honor of traveling to national competitions in their respective sports throughout the month of March. The participants were eager to prove their worth to the rest of the country after dealing with the rigorous schedule that the NESCAC offers.

Squash players Laila Samy ’18 and Raheem Logan ’16 hit their way into an invitation to Chelsea Piers, Conn., from March 5-6. Squash is a Division I sport at Wesleyan, so both the men’s and women’s teams played against stiff competition all season long. Coming into the event undefeated for her sophomore campaign, Samy showed the rest of the squash community why she is the best player to ever step onto the court for the Cardinals.

“It’s sometimes hard to convey the levels in squash as we span all three divisions, and I cannot emphasize how big of an achievement this is,” wrote Head Coach Shona Kerr in an email to The Argus. “I don’t know how many athletes at Wesleyan can say that they are truly the very best at the Division I level, and this is where Laila is at.”

In her first round match of the Ramsey, or “A” bracket, the 10th-seeded Samy readily dispatched her 7th-ranked opponent, Maria Elena Ubin of Princeton, 3-0. The first two games were close, with Wesleyan coming out on top, 11-9 and 11-8. Up 2-0, Samy got off to a quick start in what would be the final game, and Ubin seemed ready to stop playing once she went down big in the third.

After advancing, Samy was faced with the tough task of playing on the court against second-seeded Sabrina Sobhy of Harvard, a first-year standout for the Crimson. After falling behind with a loss in the first frame, Samy found her touch and hit some beautiful shots to win the following three games. The final score was 7-11, 11-4, 12-10, and 11-7.

“I definitely went in as the underdog, but I didn’t feel like I was,” said Samy. “In the first game, I was really nervous, but after that, I thought that this was the worst thing that could happen, and it happened. From there, I just tried to focus on squash. It was the best match that I played all season.”

Coming off of a huge upset and only receiving half a day to rest, Samy’s draw did not get much easier, as the imminent semifinal duel squared her off versus the third-seed, Reeham Sedky, a hard-hitting first-year from The University of Pennsylvania. The sophomore’s magical run finally came to a close, with Samy suffering her first defeat of the season, 11-4, 11-3, and 11-5.

“The competition is a lot more prepared than I am, because they have many difficult matches during the season, and are exposed to a high-level of squash much more than I am.” Samy said. “I go into these tournaments craving the competition because I haven’t faced it all season, and that motivates me to go all-out.”

Due to scheduling conflicts, there was no third-place match played, and Samy was given a final ranking of fourth in the nation and first team All-America honors. This was unfortunate since Samy would have played against Harvard’s number two, Kayley Leonard, in a favorable matchup considering she took down the Crimson’s best player earlier. She finished the season with a record of 19-1, and after improving on a ninth place performance from 2015, she will be hungry to come back next year and improve on her semifinal appearance.

“The season went really well when compared to last year,” Samy commented. “I learned a lot from my first season because it didn’t go the way that I wanted [it] to. It’s definitely a huge improvement, and after reaching the semifinals this year, my goal would be to make the finals, and even win the tournament.”

Logan represented the men’s team and played two tough matches at nationals. His opening-round draw pitted him against the top seed in the bracket, Trinity’s Tom De Mulder. Logan played the Bantam athlete much tougher than anyone expected, taking one game and coming very close in the other three games. After beating Logan 13-11, 9-11, 11-7, 11-8, De Mulder finished second in the bracket, taking a tough five-game defeat in the finals from UPenn player Hayes Murphy.

The next match for the Wesleyan senior saw him going to battle with NESCAC foe and friend Darius Campbell of Bates. Logan played another close match, but Campbell came out on top, 11-5, 17-15, 9-11, 7-11. In his final season, Logan was a first team all-NESCAC selection, an upgrade from the second team all-conference award he received during his junior year.

After coming in third at NCAA regionals, Devon Carrillo ’18 took his talents to Cornell College in Iowa to face the best wrestlers from around the country. In the 197-lbs weight class, Carrillo dueled it out with the eighth-seed, Dennis Melendez of Hunter College. Melendez snuck out a tight victory by a score of 9-7.

The Wesleyan standout, needing a win to continue his season, was now paired with Mason Baumgartner of Concordia University Wisconsin. Similarly, Baumgartner was able to pull out a back-and-forth match against Carrillo (10-8). In his first season on the mats, the dual-sport athlete assumed 15 wins and only took in four losses. He earned a top-three spot at regionals despite being seeded fifth. In this tournament, Carrillo pinned three opponents in five matches, and for this 60 percent rate, he won the Gorrarian Award, which is given to the athlete that tallies the most pins throughout the contest.

One highlight from Pearson’s season was achieving a perfect 10 on his inward 1 ½ somersault in the pike position at NESCACs. Pearson has two more years of eligibility, and should be rising up the national standings in no time.

With Samy providing a historic squash season, in addition to Carrillo and Pearson qualifying for nationals, this winter season demonstrated why the state of Cardinal athletics looks brighter than ever before.