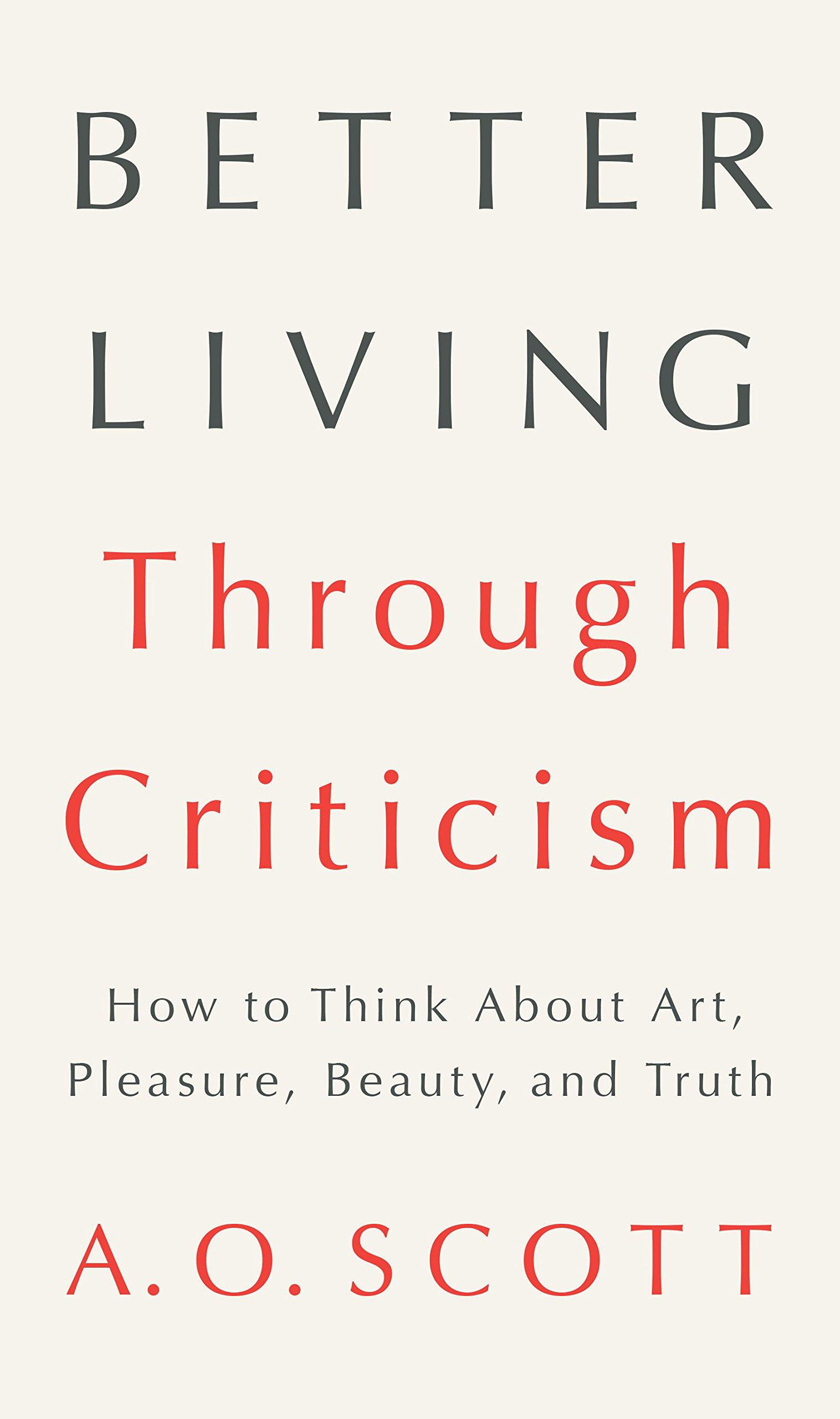 Nobody likes criticism. To criticize an artist, or the merit of a work of art, is considered one of the most vile things a person can do. To tell someone their artistry is anything less than masterful is likely to evoke an emotionally disturbed response–often something along the lines of “How dare you!” or “You don’t understand my work!”

But how can an artist grow without being criticized? Surely one can’t simply declare oneself a genius without validation, or without being able to defend one’s work. Isn’t there almost always room for improvement?

The necessity of criticism, judgment, and discussion is the foundation of New York Times chief film critic and Wesleyan professor A.O. Scott’s new book, “Better Living Through Criticism: How to Think About Art, Pleasure, Beauty, and Truth.” But the title is misleading: Scott’s book is not directly about self-help. It is about liberating his readers from narrow-minded theories about how to understand art, from methodology that suggests there are formulas to determining the greatness of art. Scott’s philosophy of criticism is much broader and universal: He claims that all art is a criticism of something (of a person, cultural idea, or otherwise), that all people are critics, that criticism enhances our understanding of art, and that being wrong is key to uncovering artistic truth.

The most immediate problem with Scott’s arguments is that they are far too vague: He is talking about ideas so incredibly broad that it is impossible for any reader to actually gain anything from them, and it would be far more helpful if Scott simply gave readers a guide which outlines what makes good art.

Yet this vagueness is precisely the point: Scott deliberately points out the logical inconsistencies in quasi-scientific methods for observing art precisely because he wants to broaden the reader’s understanding of what great art—and great criticism—is. In a lengthy takedown of the classic form versus content argument (that critics should examine the form or structure of a work of art and its relationship with its content), Scott argues that the experience of artwork is much more important than finding intellectual formulas to “help” observe it. Rather, viewers should simply engage with the art, and criticize it further from there. To have “better living through criticism” is to experience and judge art freely.

But why would anyone want to be a critic in the first place? After all, aren’t all critics failed writers who feel the need to cruelly damage the careers of other great artists? Not quite, argues Scott. For one, not all critics are failed writers: many, in fact, were successful writers who later took to criticism, such as John Ashbery, Frank O’Hara, Philip Larkin, and George Bernard Shaw. In fact, Scott employs the arguments of the great H. L. Mencken, who argued the critical impulse was a purely artistic one: The critic brings new ideas, new understandings to a work of art, and can help it flourish by guiding the audience towards understanding it. Interpreting a work of art, debating and determining its meanings, adds depth to it that the artist could not possibly have foreseen.

It is true, however, that many critics have not only been “wrong” but also harmful. Herman Melville’s “Moby Dick” was met by critics with disinterest, and he wasn’t famous until long after his death in 1891. John Keats, who had long been suffering from tuberculosis, was supposedly so crushed by a review from John Gibson Lockhart that he succumbed to his disease, prompting poet Percy Shelley to write a scathing poem that attacked Lockhart, calling him an “assassin” and arguing that critics are the natural enemy of artists.

It is true that critics can be both wrong and also harmful (my former drama teacher’s favorite anecdote was a review by New York Times theater critic Frank Rich that was supposedly so harsh it destroyed any chances of the United States having a national theater). But a few outliers do not represent the whole. And, if Shelley is right in condemning critics as the foes of artists, how does this explain the criticism Keats himself wrote through poetry? His “Ode to a Grecian Urn” details the beauty of the titular urn, essentially criticizing it (albeit in a very positive matter) by means of exposing how and why the urn is so beautiful. Criticism, it seems, is not the enemy of art, but a means of artistic enlightenment.

But rehashing and interpreting an author’s arguments is not the entirety of the critic’s job. They must also, as the title implies, critique, pointing out flaws and shortcomings. And critics themselves must not be impervious to criticism. Suffice it to say, Scott’s book is not without shortcomings. The problem with the book isn’t Scott’s philosophical ideas: they are wonderful and freeing. The fundamental problem with his argument that criticism is an art isn’t the argument itself: it’s that Scott has very little artistry present in his own writing.

Many critics have had tremendously powerful voices: Mencken was relentlessly cynical and scathing, Wilde was witty and entertaining, Roger Ebert was down to earth but incredibly passionate. Scott’s writing lacks the intensity of these great critics: He has the voice of a bearded barista from Brooklyn, whispering something about how organic his coffee beans are. He’s the type of person who goes to an art exhibit, stares at an ancient sculpture, and mutters, “ah…the technique… ah, yes…”

Scott simply doesn’t have the entertaining or engaging qualities of great critics before him. The artistic quality of his writing falters between disengaging and boring. It can, in fact, be so tremendously dull that it’s possible to be blinded by the tedium of his words, unable to see the brilliance and beauty of his ideas.

But maybe, like Lockhart and many other critics before me, I’m entirely wrong. Maybe Scott’s artistic voice is truly one of the greatest in history. Or maybe I’m complimenting his ideas too much: Maybe, in reality, they actually are far too vague to be of any help.

It’s too soon to say, though. To really get at the truth, further criticism is necessary.