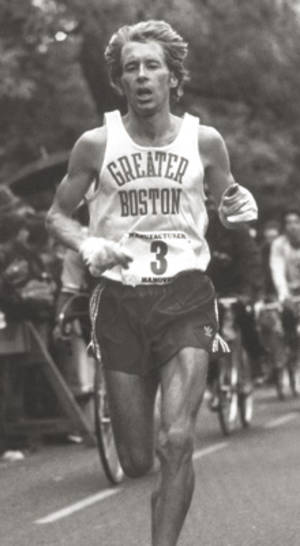 Bill Rodgers ’70 spent the first half of his life running over the terrain of the Northeast. His calves were unparalleled and his appetite for success, nachos, and cheese were enviable. The New York City and Boston Marathon saw Rodgers cross the finish line in first four times each. The Wesleyan grad qualified for the United States Olympic team in 1976 and 1980, but did not compete in Moscow due to the American boycott. Over an 11-year span, from 1973 to 1983, Rodgers was victorious in over 20 marathon events. Rodgers ran well into his 40s, and came in fifth in the master’s division for the 1990 race in Boston. Rodgers stopped running for a minute to sit down with The Argus and talk about his logged miles, his friendship with Amby Burfoot ’68, and his inexperience with treadmills.

The Argus: What did you most enjoy about Wesleyan other than athletics?

Bill Rodgers: I think there were a variety of aspects that I really enjoyed. One was that it was very close to home for me, and I liked being able to see my family and friends easily, particular[ly] on holidays. It felt more comfortable, and I also loved the smaller size of the student body. I knew it was strong academically, that there was a beautiful campus, and also an amazing field to run on.

A: What’s been your favorite place to run through?

BR: Amby [Burfoot ’68] took me out on a bunch of courses, because I wasn’t really a roadrunner, and he turned me into a distance runner. I loved running on campus and just exploring different places all over Connecticut. When I entered Wesleyan, Amby was the one who was sort of my mentor and knew the courses, since he was two years ahead of me. Amby was also a Connecticut native, so I trusted him, and he was the highest-level runner on the team. The two of us just kind of hit it off.

A: How was running at Wesleyan?

BR: I think the fact that we had a very careful coach in Coach [Elmer] Swanson, it was a perfect combination of training. We did our speed work with him, but we also did our cross country running ourselves by just going out on the roads. Wesleyan is running pretty well right now, and I think that these roads are what have helped them grow as a team. It’s easy to run for Wesleyan in that environment.

A: Are you a fan of the treadmill?

BR: I never was really on the treadmill. I didn’t really run on one in high school. At Wesleyan, the team would sometimes go to the gym, but only to lift light weights, not to run. I never became a fan of the treadmill partly because I have an awkward stride, and so I never got used it. I really became someone who spent a lot of times outdoors, but not all the time. It is really shame that I never learned to use the machine, but the facilities at Wesleyan are much better today than they were back then. We had a dirt track back then, and it was kind of primitive in a way, like the 18th century or something. That’s just the way it was, and in a sense, it was sort of cool, and it worked out fine.

A: What did you used to eat leading up to a big race?

BR: Before I became a marathon runner after college, I didn’t really understand the importance of eating. I didn’t really want to run that far, but I learned after training for a while with Amby. I remember he was a vegetarian, which was kind of unusual at the time. He had a voracious appetite and would eat large quantities of fruit juice and wheat germ and salads. He was a very smart athlete, and that definitely played a role in winning the Boston Marathon years later, because you can’t just make it on willpower and muscle. At Wesleyan, we would eat well before traveling, but in the years ahead, my diet wasn’t always the best. I sometimes ate way too much junk food, or what they would call empty calories. When you’re young, you can get away with a lot, but I also ate a lot of good food, such as pasta. I’m your classic omnivore.

Later, when I became a marathon runner, because you’re always so hungry, you do crave sugar, fats, and salt, so I’d order up a plate of nachos and cheese after a race. It wasn’t always smart, but I had a good stomach, so I didn’t have a lot of issues, and you definitely learn as you go.

A: What’s usually going through your head while running a marathon?

BR: You are trying to assess yourself and the competition all the time, while always keeping an eye on any pain or lingering that you may be having. You are acutely aware and are watching your footing like crazy, just nuts and bolts like that. It is also amazing how emotional it is, and that how quickly you can lose your focus, and therefore not run the race that you were hoping to. My first marathon in Boston, I dropped out, since I didn’t know about pacing. If you could run in your first marathon with a friend, that’s a big boost, since they can guide you.

A: How long does it take you to start running again after finishing a marathon?

BR: Yes, you definitely should take a break, and when I was running, sometimes we would run [again] the next day. The problem is, sometimes there is a euphoric reaction after you hit your goals in the marathon, and the science of the sport hadn’t caught up to us back then. I used to run three to four marathons per year, but today, the top runners will only run two because they are training harder and the role of recovery is emphasized much more.

A: How did your relationship with Burfoot help to develop your running career past the collegiate level?

BR: I remember Amby from high school when I believe he was the state champion in the two-mile, certainly one of the best in Connecticut. In college, Amby understood what it would take to become a marathon champion, but I had not yet realized it. He reminded me of Abebe Bikila, the gold medalist from the 1968 Olympic games. He was skinny and tall, and ran a similar style, which was very methodical and looked like it did not involve too much effort. I learned a lot from Amby, and some of it was how he consistently trained twice a day. Years later, when I was on my quest to become a marathoner, that’s what I moved to, and it worked for me too.

In terms of being friends, it was an unusual environment because there were no women at Wesleyan, and we would joke about the women’s dorm up on the hill, “Oh, are you going out on a date?” We were pretty dedicated, trying to be student-athletes.

A: What was your biggest learning experience/takeaway from participating in the Olympics?

BR: The Olympics were both wonderful and terrible. First, to make the team was pretty hard, as the defending Olympic gold medalist, Frank Shorter was on the team. I knew I had a good shot at it, and it was absolutely exhilarating, but the issue was then that I lost my focus for the Olympics itself, and that paired with a foot injury did not spell success. To represent the United States was a terrific feeling of positively. I finished the race, but that’s about all. The next chance was in 1980, and I was still running well, but there was a boycott, and then I was too old in 1984.

A: When did you know that it was time to give up running?

BR: It was a gradual process, but I remember training for the Boston Marathon when I was 45, and just thinking about how tired I was. In endurance sports, it’s the wear and tear on your body that brings you down. Also, the psychology, what you still want from your sport. You start to think about that more and more, and by then I had become a parent with two daughters. Your life changes when you have children, and I still love to run, but at that time I didn’t really want to race the marathon. I had explored the event fully, and that was enough.

This interview has been edited for length