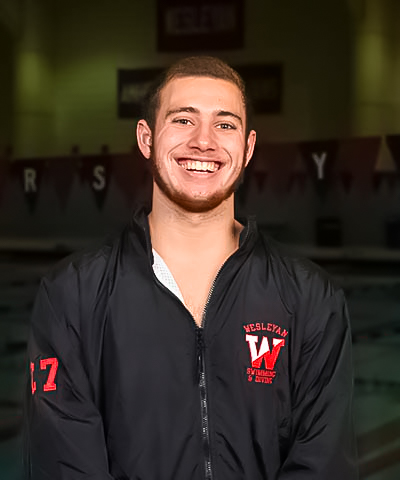 Connecticut native Max Wimer ’19 made a splash in his first season as a member of Wesleyan Swimming & Diving. With the team struggling to a sixth consecutive losing season, Wimer was a bright spot that helped keep the team’s hopes for the future afloat. In the season-capping NESCAC championships, he finished in the top half of competitors in the men’s 200-yard freestyle. Wimer also competed in the men’s 800-yard freestyle relay, which similarly bested over half of its competition. Undoubtedly, his efforts and results this season cemented him as a key aspect of the team’s plans for the next three years. From now until next winter, Wimer will compete with the club water polo team, which takes itself less seriously, but nonetheless has some ambitious goals of its own. He sat down with The Argus to discuss the past, present, and future of both of these programs.

The Argus: Swimming hasn’t had a winning record in a few years.

Max Wimer: [laughs] Yeah, in a lot of years.

A: What institutional problems might be causing that, and what are you doing to address those issues?

MW: Well, it first starts with the culture of the team. I know a couple years back there were about 12 guys on the team and it was more of just a club, and a gathering space more than an actual team. But in recent years, coach [Peter] Solomon has brought in large classes of swimmers, upwards of 16 per class of people who want to stay and do well and compete. The biggest problem in Division III swimming is retention. You see a lot of swimmers quit after sophomore [or] junior year. Our freshman class was 16 people this year, the senior class was five, and obviously there’s a big gap between that. You want to keep the swimmers all four years because there are fast swimmers who aren’t on the team right now. So we just need to keep people, and we are.

This year’s sophomore class is all staying except for one swimmer who may or may not come back, our freshman class is all staying, and next year we’re bringing in a good class. Maybe one of the biggest differences between us and other NESCAC schools is that people aren’t getting in. A lot of our fast recruits haven’t gotten in this year, which kind of sucks, and all the really fast swimmers want to go to Williams because it’s a really good school with a historically better swim program. So a lot of them go there, and the ones who can’t get in end up going to Conn College or Trinity, and it provides a barrier for the team which makes it all the more imperative that we find swimmers who can get in and contribute.

So we need to work on recruiting and retention, and we have, and it’s showed. Two years ago we got 10th [place at the NESCAC championships], the year before that we got 11th, last year we got eighth, and this year we got eighth despite being plagued by sickness and just some bad swims, which happens and unfortunately occurred at NESCACs. It bodes well that we got eighth even with all that happening, so hopefully next year we can move up.

A: Can you talk about some of those struggles at NESCACs?

MW: Spencer Tang [’18], one of our best swimmers, was out. The whole meet, he swam a couple relays but he was very sick. He was throwing up a lot but he was a champ and got in when he could and did what he could. The thing about swimming is that it’s pretty set in stone, which kind of sucks. It’s not like us, being eighth, could dethrone Williams the same way that in basketball or football you can beat a better team on any given day. In swimming, there’s no way I’m going to beat Michael Phelps. Your ability is pretty determined by what you do in season, and it shows. You can drop a lot of time, but you aren’t going to drop so much time that you go from being an okay swimmer to contending for a championship. So it takes a lot of time and a lot of practice over the years, which is kind of frustrating because you don’t see results instantaneously. It’s going to take time and hopefully by the time I graduate, we get into the upper half of the NESCAC.

A: Would you say that eventually being in the upper half of the conference is the team’s goal right now?

MW: Well, eventually it’s to contend for a title, but I think in the next few years a reasonable goal would be to get into the top six. So we have to beat Middlebury and Bowdoin, which is close.

A: What would you set as water polo’s objective for the season?

MW: Spring is just a preview for the fall, as we’re just getting back in the water. We have a tournament at [Worcester Polytechnic Institute] the weekend we get back from break, and that’s just to get our feel back and remember how to play polo. Then we have an alumni game two weeks after that where all the alumni from recent graduates to 20 years ago come back and it’s just a fun time. For the fall, we want to make nationals. We were close to it last season, but we ended up getting fourth in the league because we lost to Coast Guard Academy by a goal in the final game. We actually lost to them by a goal three times that season. If we had beaten them, we would have played Williams in the championship, and the winner of that would go on to play at Nationals. Williams won, but they’re losing a heck of a lot of seniors so hopefully that, with our drive, can get us to Nationals.

At the beginning of the season we were kind of lackadaisical, but when we started to realize we could do something cool, we really started to push. Another good thing that’s happening is that we’re going to get a coach. This year, it was Erin Cohn [’15], who was a recent graduate from the team, but she’s busy doing her own thing and she can’t be here all the time, which is reasonable. But hopefully, we can find a coach who can be on deck at practice all the time, pushing us, motivating us, and just helping us be better. Erin did what she could, but she couldn’t always be at practice so the captains would run practices, but some of the captains and the team want a coach to help us maintain practice attendance. It is a club sport, so people don’t need to devote as much time to it, and we want people to do that so we can do well.

A: Do you think the team wants a culture change so that it is treated more like a varsity sport?

MW: It would make us a substantially better team, but what’s so fun about water polo is that it’s not that serious. It’s mainly a group of people who want to hang out and play polo. We played polo in high school and we love the sport and we all do care about it, but what it’s really founded upon is hanging out and playing polo. We want to do well and hold people to a certain level, but not a varsity level or anything above that. We have to know what we’re doing, know what it’s about, and it’s about having fun.