“The Workshop” Opens its Doors 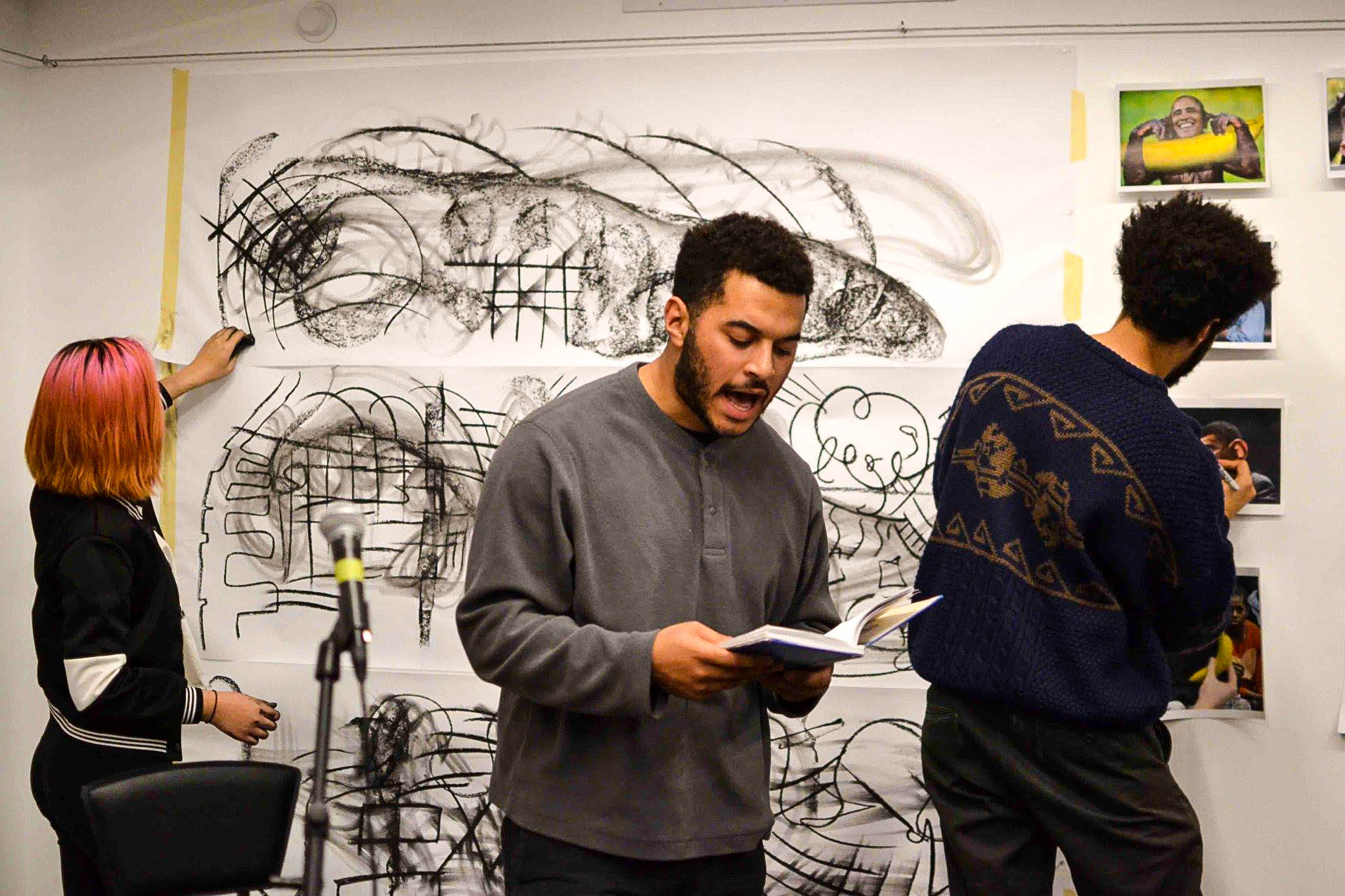 Last Saturday evening, while Middletown experienced record-breaking temperatures and so-called life-threatening wind chills, a friend and I decided to embark on a journey to the back of Hewitt 8 for the grand opening of a new art space called the Workshop. Neither of us had ever been to this part of the campus before, but we had both heard about the new student-run collective, which was encouraging the Wesleyan student body to submit pieces and contribute to the newly founded group.

Upon our arrival, we caught sight of large white letters spelling “THE WORKSHOP” on the transparent wall of the former Hewitt lounge, marking the entrance to the newly renovated space. A group of students welcomed us and encouraged us to explore and enjoy the exhibit.

I was immediately struck by how the Workshop stood out from other student-run spaces on campus. It was almost as if a MoMA exhibit had been transported to Wesleyan, replete with inventive artwork and wide-ranging talent. I suddenly realized the necessity of such a space, where students could both create and exhibit works of their own.

On a table nearby, there was a large white canvas with a collection of markers lined up next to it, intended for passersby to contribute drawings. The images on the canvas’ surface ranged from elaborate designs to rudimentary doodles. A stage was being set up at the other end of the room with speakers hanging from the ceiling, and most of the walls were covered with paintings, pictures, or sculptures of various sizes, some with small signatures identifying the artist and some with no sign of their creators. Sheets of paper were scattered around the room listing the artists who had contributed, as well as information about the Workshop. A few student-published works were available to read or borrow for those interested.

“The Workshop” consists of five rooms, several of which are dedicated to a specific use, such as the computer lab and the storage room, which provide high-tech computers and technical tools to students who may not normally have access to such expensive material. One open room had a projector inside, which was screening an old home video that the artist had found in the depths of her grandfather’s basement.

The art, however, wasn’t just contained to rooms designed for artistic production: One of the two bathrooms had been converted into an installation piece with colorful, patterned paper filling the sink and hanging from the toilet, wall, and toilet paper dispenser.

As we completed our round of the rooms and returned to the entrance, I noticed that new pieces were being added to the exhibit and the rush of new people entering the building had completely shifted the dynamics of the space, filling it with a buzzy, creative energy. Soon, a few performers gathered around the stage and called the audience’s attention, quieting down excited visitors and announcing the upcoming acts.  Throughout the course of four performances, Shirley Fang ’18 drew on a piece of paper hanging from the wall behind the stage, her drawings changing with the tone of each performance and resulting, by the time the pieces were all finished, in a stunning abstract charcoal work that oozed emotion and creativity.

Nyanen Deng ’18, whose habitual musical partner was unable to join her, performed an a cappella cover of a Regina Spektor song after playing a piece on her guitar. Then Angus MacDonald ’16 read a few brief poems with the lights off, a lit sparkler in his hand.

Next, Jonah Toussaint ’17 took the stage with a moving monologue that he performed while hanging horrifying pictures he found on the Internet that compared the Obamas to monkeys. Toussaint recalled that he had originally written this piece and discarded it because he thought it was “ugly,” but stressed the fact that we can’t just have pretty art; some art has to make us uncomfortable, a sentiment that came across most strongly when he paused mid-photo-hanging and said, “I don’t know about you guys, but I’m pretty uncomfortable right now.”

Toussaint proceeded to color these pictures in with blackface during the final performance by Christian Black ’18. The two have collaborated on countless projects and artistic endeavors together and are two of the principal founders of the Workshop. Black’s spoken word performance incorporated spontaneous stuttering sounds and addressed a range of topics including greed and its connection to race, on campus and in general.

The Workshop holds an important role as one of the very few spaces for students to create and share their work. With this role comes many important decisions into which its creators put a lot of thought. In a meeting that the current organizers of the group held in late January, they considered how they would maintain the Workshop’s inclusivity, and brainstormed strategies to make the group available to a wide variety of students.

Notes from the meeting are available online for all students to read, reinforcing the idea of the workshop as an open, inclusive group.

“As a student­-run space, it is our responsibility to consider how our actions and voices shape our community,” their statement reads.  “This space aims to amplify voices that go ignored elsewhere. It is vital to act with respect and encouragement towards each other and to incorporate outreach into our practice.”

One of the ways in which they plan to accomplish this final goal is through programs and events during orientation week.

These published notes also articulate the group’s plans to maintain an attitude of diversity and openness: “‘The Workshop’ is composed of multiple voices – it does not belong to one group of people. Communal enthusiasm will sustain this project over time. We will exercise collaboration with members of our faculty and devote careful attention to establishing practices that keep institutional memory close to the heart.”

The Workshop will be open this week on Monday and Friday from 4 p.m. to 8 p.m., and on Saturday and Sunday from 10 a.m. to 4 p.m. Now that the space is officially available for students to use and cultivate, it is largely up to the student body to uphold the mission and purpose of this student art collective as it aspires to fill the void that that once existed for inspired and creative individuals.