Psi U Hosts Second Annual “A Penny For Your Thoughts” 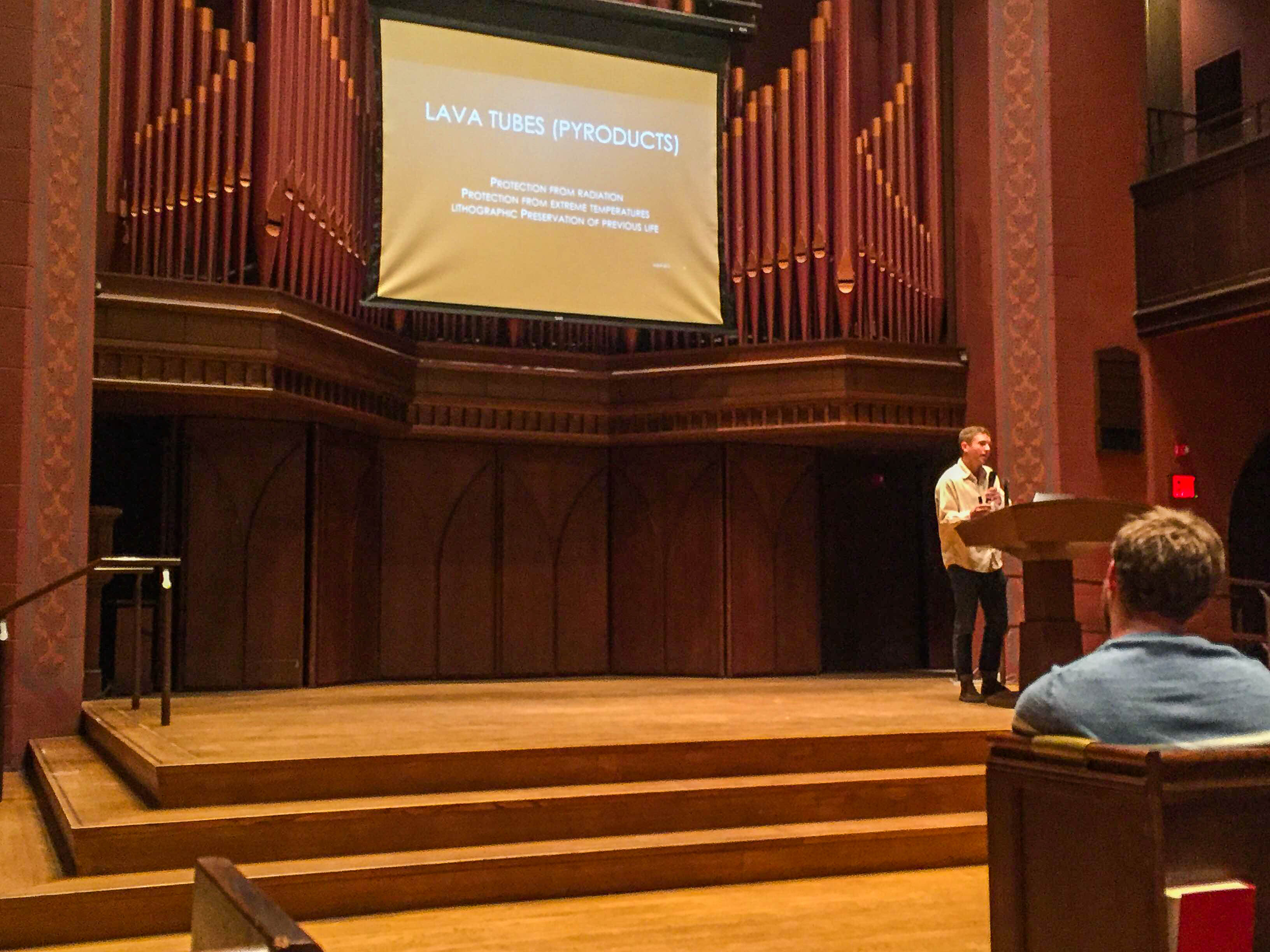 On Wednesday, Feb. 18, Psi Upsilon (Psi U) hosted its second annual “A Penny for Your Thoughts” event, bringing in four University students to share their stories and their interests with a large audience. The event was in part a fundraiser for the MacDonough Elementary School in Middletown.

The four students speaking at this event were Oliver Goodman ’17, Will Richmond ’18, Jesse Tarnas ’16, and Brenna Tharnstrom ’16.

“A Penny for Your Thoughts” was organized by Psi U as a way to give back to the University and the Middletown community. They hoped to provide a platform for students to share their work in the form of short TED talks.

Goodman was the first speaker, with a talk titled “Death and Death Valley.” Goodman, a biology and English double major, was a park ranger over the previous summer.

“Suddenly everything had changed,” Goodman said. “I was meeting incredible people and doing incredible things and taking a lot of selfies in my park ranger hat.”

One day while he was at the ranger station, he was forced to evacuate as a fire had begun throughout the park. During this time, he discovered a book by Edward Abbey, which inspired him regarding the concept of the desert as a medium.

“I was trying to place the desert into a neat and tidy box so I could look at it as a whole,” Goodman said. “What this means is the desert is like an ocean, like a plot of fertile land, with things inside of it, with plants and bugs and bacteria and all the material we’re looking at.”

When he returned to the station, everything was ravaged by the fire except for beargrass. He explained that beargrass grows back quickly after a fire but is not easily visible by car.

“Life, especially in the desert, is hard to see,” Goodman said. “You can’t compare life in the desert to the Northern Rockies. Although both [are] incredibly beautiful, it takes more…to appreciate.”

He urged the audience to get out of their cars and appreciate nature firsthand.

The second speaker was Richmond, who took medical leave from the University for four years.

“My name is Will Richmond, and I’m an alcoholic,” Richmond began his speech, reminiscent of Alcoholics Anonymous meetings.

He recounted his story of how he got to the point of being an alcoholic, beginning by explaining his family roots and his first encounters with illegal substances.

“Growing up, I was never comfortable in my own skin,” Richmond said. “I just felt tense. I never felt quite right. I don’t know if anyone else felt that way.”

He said that he tried to justify his turning to substance abuse by saying that was how he dealt with his family issues.

“The truth is I didn’t know [how] to deal with what was going on inside my head, like the voices that told me I wasn’t good enough,” Richmond said. “I chased [the feeling of being on alcohol], I chased that for a while. It became a survival mechanism for me.”

Richmond talked about how he had harmed the people around him, and this was his initial motivation to change.

“I didn’t think I caused that much harm [to myself], but I hurt people I cared about the most,” Richmond said. “I stole time from people. My mom stayed up, I don’t know how many hours, just worrying about me.”

He talked about his adjustment after becoming sober and how that was hard for him initially, especially coming back to the University after his medical leave.

He ended his speech reflecting on his life thus far and how he had changed.

“The world is no different than it was before I got sober, more or less, what’s changed is my perspective of things, and my reactions to situations… and that’s all stuff I had to work for over time,” Richmond said. “I would urge people…to try and do something uncomfortable and try to push yourself.”

Tarnas, a physics and astronomy double major, spoke about life on Mars and lava tubes. He spoke enthusiastically about how he continued advancing his initial love for space when he was a little kid.

“No one’s actually discovered life on Mars yet, but [lava tubes] is where we have to look, in our generation of space studies, if we want to find it,” Tarnas said.

He showed pictures of lava tubes and topographical maps of Mars in order to explain the possibility of life of Mars.

“Lava tubes create an environment where they’re protected from the sun’s radiation, and from the extreme temperatures that you have on the Martian surface,” Tarnas said.

He showed a map of collapsed lava tubes and explained that the existence of collapsed tubes meant that there were tubes that had not collapsed.

“So you can imagine lowering down into that, and God knows where it goes,” Tarnas said. “You can explore it, see if you can find some microbes, or other signs of life, set up base camp here to protect yourself from radiation, Martian storms, extreme temperature shifts. This is the future of Mars research for our generation, exploring the subsurface.”

Tharnstrom is an English and psychology double major, as well as a sexual health intern at WesWell. Her talk, “Sex Positivity and Feminism in the 21st Century,” discussed sex positivity and media portrayals of sex.

She said that anatomically, there is no actual way to tell virginity and that it was a social construct.

“Virgnity is really just a term made up to shame people,” Tharnstrom said.

She also discussed the idea of popular articles that are often shared on social media networks shaming women who sleep around.

“This article feeds into the idea of bodies as currency…which is a very harmful way for people to see their own bodies,” Tharnstrom said.

She also spoke about the need for reducing the stigma of STIs.

“No matter how you want to deal with your sexuality in your life that’s your prerogative, and it shouldn’t be anyone’s place to tell you how it should be or change you for it,” Tharnstrom said. “It would be so awesome to learn about a society where people aren’t doing that anymore.”

The talk brought together students with varying stories and ideas and led the audience to thinking about different topics and becoming more aware.

“Thank you everyone for coming; I hope you all enjoyed it,” Rohan Shriram ’16, the emcee of the event, said. “I know I definitely learned a lot.”