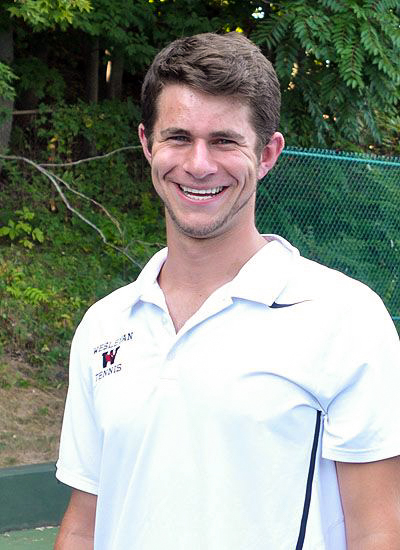 When I came to Usdan to interview Zacko Brint ’16 for the latest WesCeleb interview, he was talking to a group of people on the ski team. Brint is not in the ski club, he told me later; he just likes to talk with all different kinds of people. Brint spoke with The Argus about his love of talking, his fear of acting, and his obsessive interest in airline flight routes.

Zacko Brint: I’d say that I’m a rather outgoing, loud person. And I like to meet a lot of people, I know a lot of people. And yeah, I think I’m engaged, I’m involved. I think that’s probably why.

A: What sort of things do you do around campus?

A: How long have you worked at the Mongolian Grill?

A: What do you do at the Green Fund?

A: What sort of acting things have you done?

ZB: I started acting second semester sophomore year. Dylan Zwickel [’14] was directing “Hamlet,” and she heard me read something at the top of Masada in Israel on Birthright and said, “You’re auditioning for my play.” And so, I auditioned—I’d never acted before in my life—and that started, and I’ve been in a couple of Russell Goldman [’17]’s productions, and a couple of one-day plays, and there was another play called “Overheard,” and it’s been a blast.

A: What role were you in “Hamlet?”

ZB: “Hamlet,” I played Marcellus, who was like a bodyguard. He stands there like this [Brint puts his arms at his side and sits stiffly] most of the time. And then I played the first player. It was a real monologue, it was a real bit, which was cool. I told my sister that my primary role was being the second tree on the left, just standing.

A: What makes you a good Marcellus?

ZB: I think…I learned a lot. I was working with two people who had been acting for a long time. And what I learned—I don’t know if I was a good Marcellus—but what I learned was just how to play off of the other actors.

A: What was it like having your first acting experience be “Hamlet”?

ZB: So me, I’m not a nervous person at all, right? I can talk to anybody, have conversations. I can compete on the collegiate level, so I’m used to that pressure. The first time I acted, I was shaking like you wouldn’t believe. I had to deliver my first line and it felt like an hour, the pause that I took, it was maybe a second pause. But it was great. Fun to get outside of my comfort zone, fun to try something else. And that did it.

A: What do you think made you so nervous about acting?

ZB: I think, truthfully, it’s probably just insecurity. It’s probably just me not being sure how other people are receiving what I’m doing. You know, in tennis, you win a point, you get that feedback that you won. How do you get that in acting? How do you know that? Very few people are going to come up to you at the end and say, “Wow, you did a crappy job.” In tennis, they can come up to you and say, “Wow, you really sucked. You didn’t do a good job.” So I think that’s what was nervous to me. Just that ambiguity of acting.

A: Could you talk a little bit about doing tennis?

ZB: I’ve been playing tennis a lot of my life. I come from a tennis family. Somebody that’s in a tennis family knows what that is. Just that my grandpa played in college, my parents are players. So that’s what got me into tennis. I’ve been unbelievably lucky. When I got here, there was a new coach on the tennis team, his name is Mike Fried. He’s really effected positive change on the team. We’re having really good seasons, we’re bringing together really awesome guys who turned out to be some of my best friends. Overall, it’s been a great experience.

You know, I came from a very different program, I came from a coach who would scream in your face all the time. And Coach Fried’s not like that. Coach Fried’s much more docile….We beat the number-eight team in the country last year. We’re going to have another great season this year, I hope.

A: Do you think that his attitude as a coach—not being scream-in-your-face—has helped you?

ZB: You know, I’ve learned that you can’t force somebody to teach you the way you want to be taught. If somebody’s good—if somebody knows how to teach—you need to adapt to their style. And because of that—it’s taken me awhile, and that’s a big life lesson to learn—but I’ve made that adaptation and now it’s easy to learn from different people.

A: What are you looking at doing after college?
ZB: After college, I’ll be working at United Airlines in the network planning department. I’m working in Chicago, the hub that I’m working on is San Francisco. So essentially what I’ll be doing is working to understand where planes should fly for United from San Francisco, at what frequency, what types of planes, these kinds of things.

A: What drew you to that?

ZB: I’m an airline geek extraordinaire. If I’m not doing one of these activities you’ve seen me talk about before, I am reading airline news, reading airline books. It’s great. Yeah, I love it. If you ever need to book a flight, come to me. No, really, I have all the routes memorized in my head, so I know where airlines are flying…my friend booked a flight for his mom to India, you know, it’s fun stuff like that.

A: So if I wanted to go to India, what would—

ZB: All right. Hartford’s actually very interesting. Probably the easiest way to get there would be flying United to Newark and then switching to Air India, which has non-stop service to Mumbai. The reason it flies out of Newark is that it’s part of the Star Alliance, so that it works out of that Newark hub. The first flight will probably be on a Bombadier Q400, I believe. And then the second flight would be on a Boeing 777, I think is what Air India flies. So that’s probably…I don’t know if Air India’s the most comfortable route. In the future, out of Hartford, you could—you asked the wrong question—I don’t think that Air Canada goes direct to Mumbai, although that’s interesting, that you could fly to Toronto.

A: So when did you start memorizing all of this flight information?

A: And you said you read a lot of airline news. What do you read?

ZB: There are some really interesting websites out there. One is a French website, which helps me—I’m a history and French major—so it helps me keep up with my French, it’s [air-journal.fr]. What it does, it’s unbelievable. It’s a French website, and it probably has 15 articles a day about new routes, about airports that are doing well, about airports that are struggling, talking about new airline code shares, these kinds of things. So I read that.

A: What’s your thesis on?

ZB: This is interesting. The thesis is on the immigrant Jewish community’s reconstructing after World War II. So, essentially, France’s Jewish population doubled from 1920 to 1939. And most of that growth was not from births, but from immigrant refugees coming into the country. They engaged by the tens of thousands—engaged, meaning, they fought in the military. So the thesis focuses on the after-the-war period. What’s happening to these communities after the war? And I think that you’ll find that there’s a lot more immigrant-driven change than is reported in other academic works. Most academic works stop in 1944 when they’re talking about Jews in France. But those that do further, they mostly just focus on the international role.

A: What is the change that—

ZB: What are they fighting for? One, they were fighting for naturalizations. They wanted to make sure that anyone who fought during World War II who was an immigrant got the right to be a French citizen. Two, they just had to reorganize their society. Since Napoleon won, the Jews in France have been controlled by a government entity called the Consistoire. And the question after World War II is, will the Consistoire, which kind of had a complicated relationship with Vichy, will they continue to play the primary role in Jewish relations in France. I think the answer is no. I think the Consistoire has to recede a little bit.

A: And what’s the title of your thesis?

ZB: The title is not that important. It’s called “Post-War, Out of the Epilogue: Foreign Jewish Veterans in France after World War II.” What I’m saying is, get the post-war out of the little section of the text they’re talking about. Get it out of the epilogue.