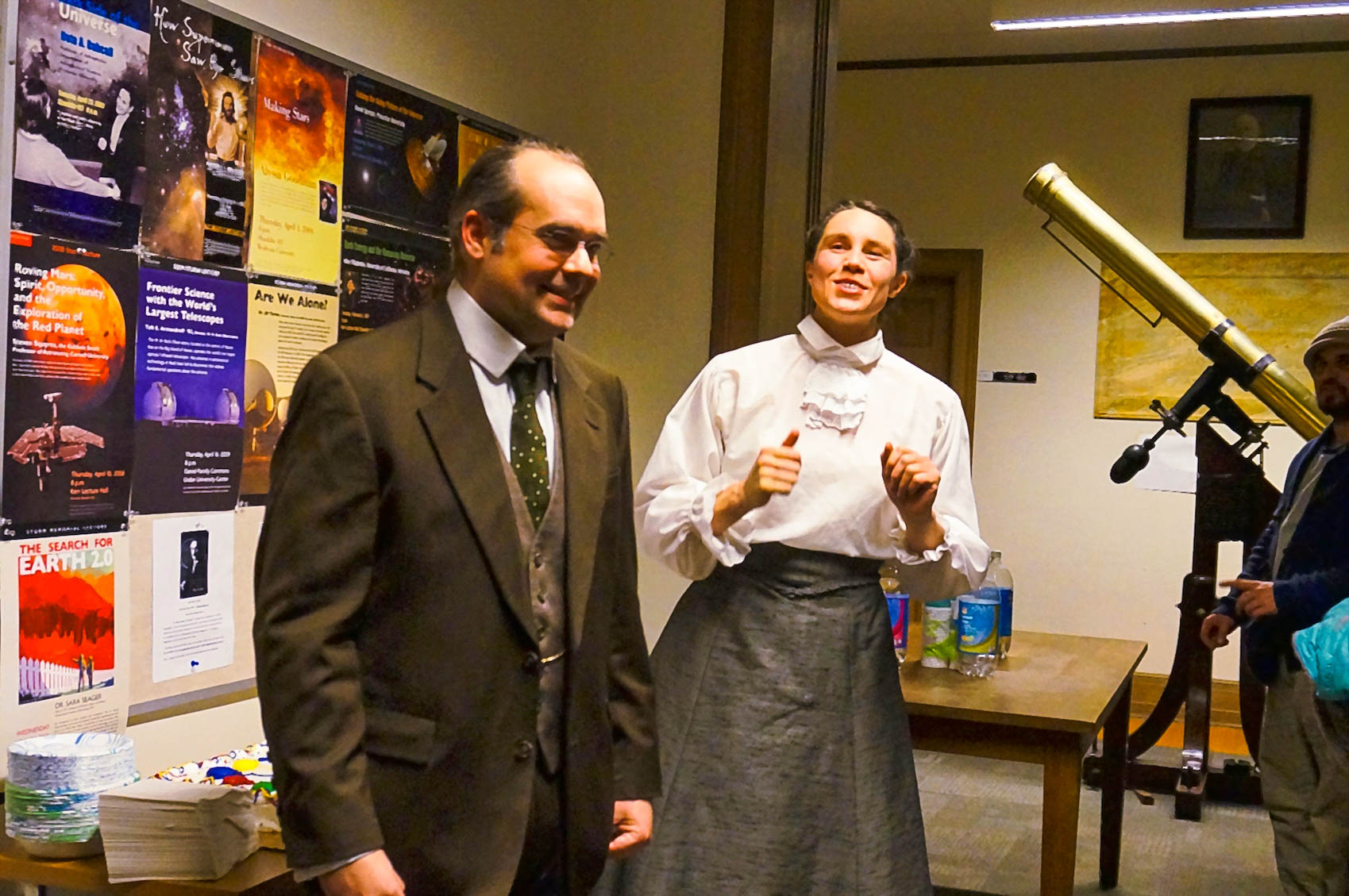 Feb. 6 marked the 143rd birthday of Frederick Slocum, the original director of the Van Vleck Observatory. To celebrate, the Astronomy Department and the History Department teamed up to throw a party in his memory, complete with a birthday cake and featuring early 20th-century dress. Support Astronomer and Research Associate Professor of Astronomy Roy Kilgard and Visiting Assistant Professor of History Amrys Williams were the main faculty organizers of the event, which is also part of the larger event series celebrating the Van Vleck centennial anniversary.

“The idea to celebrate Frederick Slocum’s birthday was the brainchild of one of our summer research students, Michaela Fisher [’17], who had spearheaded putting together a list of fun events to happen throughout the semester in the lead-up to the centennial,” Williams said. “So we just had this on the calendar as something we were going to do early in the spring semester, but we didn’t know exactly what we were going to do.”

Matt Shelley-Reade ’17, a student event organizer who was also involved with the Under CT Skies grant last summer, explained how the party helped gain support for the curation of an exhibition in honor of Van Vleck.

“I worked with a group of students and faculty members on preparing a museum exhibit for the Observatory’s centennial,” Shelley-Reade wrote in an email to The Argus. “Frederick Slocum’s birthday celebration was part of our public outreach for the project.”

With help from Visiting Professor of Theater Cybele Moon, Kilgard and Williams were outfitted in a manner that corresponded with the era being commemorated, while also utilizing an old projector and lantern slides to reenact what a lecture 100 years ago would have been like. Kilgard added how the use of period dress paired with an old-fashioned talk came to fruition.

“Last summer, we were brainstorming ideas,” Kilgard said. “Another idea we came up with was trying to recreate what a public astronomy lecture would have been like in 1916, since this was a new building, and these two ideas merged somehow, and we decided that would be an appropriate celebration for Slocum’s birthday.”

The two professors were particularly excited about digging up old materials at Van Vleck that have long been out of use in preparation for their lecture at the party, as well as for an ongoing project at the observatory.

“One of the things that’s been greatest about the whole historical project around the observatory for me has been getting to work with this really amazing collections of documents, artifacts, objects, and instruments,” Williams said. “There’s so much here that’s really very rich.”

Kilgard was thrilled with the turnout and hopes that this type of event is but the first of many to come throughout the rest of the semester.

“This weird presentation of recreating a 100-year-old lecture was just a thing that we kind of thought up and just decided to do it,” Kilgard said. “Everything kind of came together at the last minute, but it all worked… so I’m looking forward to finding other things like that that we can do over the next few months that will bring in people from all over campus and present exciting and unusual things.”

Williams was also very eager to have the opportunity to look through the newly restored telescope during the public observing session following the lecture, an object that has been a work in progress for the past year.

“Saturday was my first chance looking through the restored telescope, which is funny because I’ve been working on this project for over a year now… I had never looked through the telescope that we were spending a lot of time researching and learning about,” Williams said. “It felt very fitting to look through it in 1916 garb for the first time, and it was really so amazing that we had good observing conditions because it was supposed to be cloudy and the clouds cleared, so everything really did come together, even astronomically speaking.”

John Monroe Van Vleck Professor of Astronomy and Professor of Integrative Sciences William Herbst, who was in attendance at the event, mentioned how the restored telescope will now be a staple in the observatory, allowing those interested to use it on observing nights.

“The newly restored telescope is now going to open to the public for viewing,” Herbst said. “The whole community is going to be treated to the opportunity to look through it, and it really gives spectacular views of the heavens.”

Kilgard looks forward to the possibility of teaming up with the History Department in the years ahead.

“I think I can probably speak for both of us in saying that this has been a really rewarding project and collaboration between history and astronomy,” Kilgard said. “Even after the centennial is done, I really hope we can continue doing collaborative projects in the future, especially events where we can draw in the public and people from campus.”