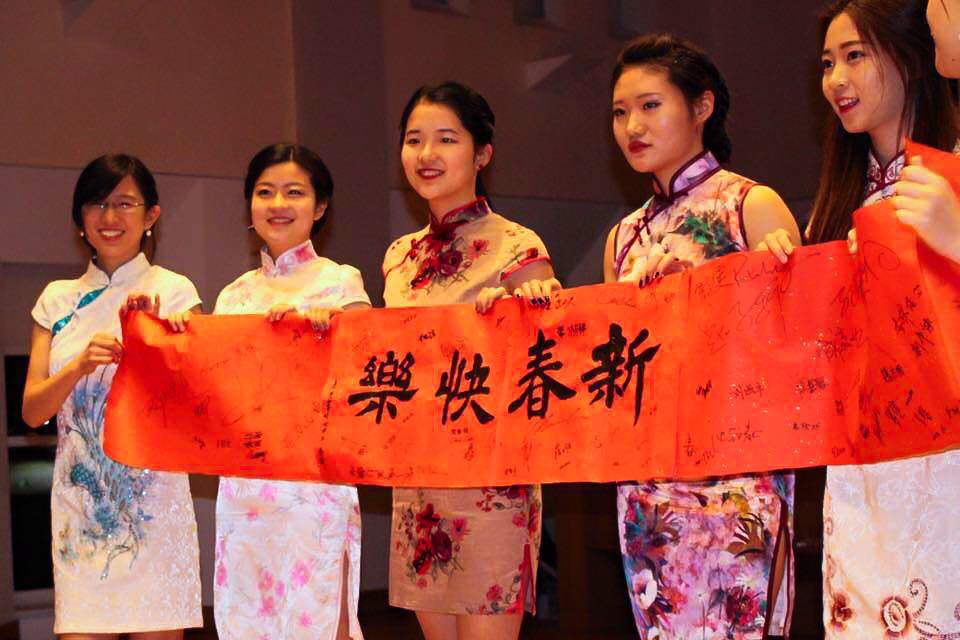 Last Saturday, the Chinese Cultural Club (CCC) hosted a culture show celebration to honor the Lunar New Year. The Lunar New Year, which occurred on Monday, Feb. 8, represents the New Year in the Chinese calendar. Although not the first of its kind, it contained elements that were different from previous years’ celebrations. The show consisted of traditional Chinese performances, modern fashion shows, and performances presenting the arts and music of ethnic minorities in China, organized in a timeline of Chinese history.

The CCC hosts a cultural celebration annually around every Lunar New Year. Emma Wang ’17, one of the organizers of the event, said that this year, they started planning the show last semester.

For the first time, the performances were organized in a timeline of Chinese history to honor the country’s history.

“Something we did differently from past years is that the performances were organized through a timeline,” Wang said. “We had traditional Chinese performances, like traditional Chinese dancing, and then something more modern, like [the] Qipao fashion shows, which is the typical outfit for Chinese women 100 years ago and still deemed the ‘national dress’ of China.”

Lucia Wang ’18, another organizer of the show, discussed how the timeline system created an experience for the audience.

“From ancient China to modern China and finally moving on to contemporary China, our performances aim to present Chinese culture in a comprehensive and interesting way by taking the audience on a journey,” Lucia Wang wrote in an email to The Argus.

The performance also had a cultural element, spotlighting the view with which foreigners usually look at China.

“We had skits about how people usually perceive China nowadays, and also joking about ‘Chinglish’ and had some Chinese pop songs,” Emma Wang said.

Emma Wang said that they wanted to focus on how some people in the United States have an inaccurate perception of China.

“We did all that because, usually when people here in the States think about China, the impression is always very simplistic, but for us, China is a country as diverse as the United States,” Emma Wang said.

“It would be difficult for us to name something ‘Chinese’ without naming specific geographic locations of China and historical times of China,” Emma Wang said. “So we figured that we want to do something that break that outgroup bias about China, and let people know how diverse our culture can be.”

The celebration had several different aspects, including performances, games, and food from Asian Restaurant. There was also food that was cooked by the organizers themselves.

Another new aspect of the show was the hometown videos. Over winter break, many of the students involved in the performances went back home to China, and they were tasked with the responsibility of filming their hometowns to display at the culture show. These videos were played while people entered and also during the meal portion of their celebration.

“The videos we filmed during winter break are short videos of different cities in China, just to ‘show off’ our diversity a little bit,” Emma Wang said.

Tian Qiao ’15, who is currently a graduate student at Duke University, returned to campus this weekend to celebrate the Lunar New Year with his old friends.

“For me, the best part is to catch up with friends in such a familiar setting since I organized the event myself a couple of years ago,” Qiao wrote in an email to The Argus. “It is great to see the old friends and new freshmen, many of whom I have contacted after they get accepted to Wesleyan.”

He thought the show was entertaining and was happy that he had gotten the chance to see it.

“Regarding the show per se, it is great to see high participation from all class years and the solo singers are all amazing,” Qiao wrote.

Yuhan Wang ’19, another attendee of the show, thought that it was a great event to put on for the University community.

“I thought that it was a very lovely event in the fact that it showcased parts of Chinese culture to the Wesleyan community,” Yuhan Wang wrote in an email to The Argus. “My friends put in so much work for it and I thought it was well planned out and exciting.”

Zuohao ’18 thought that the performances at the event were a good showcase of Chinese culture.

“The retro performance by Philip, acting as the 80s star Kris Philips, is really awesome,” Zhang said. “The qipao fashion show showcased the Chinese fashion tradition at its best.”

Emma Wang spoke to how the Lunar New Year celebration held at the University reflected her experiences back home in China.

“We usually buy and wear new clothes during this time, eat a lot of very good food, give and receive red packets,” Emma Wang said.

She also said that the Lunar New Year celebration was a large part of the Chinese culture.

“Usually back in China it’s a lot like Christmas and Thanksgiving,” Emma Wang said. “Families gather together, visit relatives, say good things to each other indicating good luck for the new year…. Interestingly it’s also the time of the year when people bring home their serious girlfriend or boyfriend and officially meet their significant half’s families.          ”

This year, the CCC received a lot of help from other on-campus organizations, including Chinese House, the Korean Society, and the Taiwanese Society. They hope that in the future, there can be more collaboration among different entities on campus.

“We hope that there could be more diversity in the performances, and more cooperation with other student groups,” Lucia Wang wrote. “It will be even better if the celebration could reach out to people outside of Wes.”

The organizers agreed that attracting more people to the event would be a common goal for the future of the celebrations.

“For future CNY celebrations at Wes, I personally hope for something more than just Asian people having fun with themselves and ‘learning things’ we already know,” Emma Wang said.

Emma Wang also explained that, to her, the celebration also has an educational aspect for the non-Chinese community at the University.

“I hope we can do something more informative about Chinese culture and Asian cultures in general, and include not just Asian people who celebrate CNY and are aware of what happens,” Emma Wang said. “I know this is not an easy thing to do, but I feel like it’s really important for people to get to know different cultures and understand how each other have fun.”