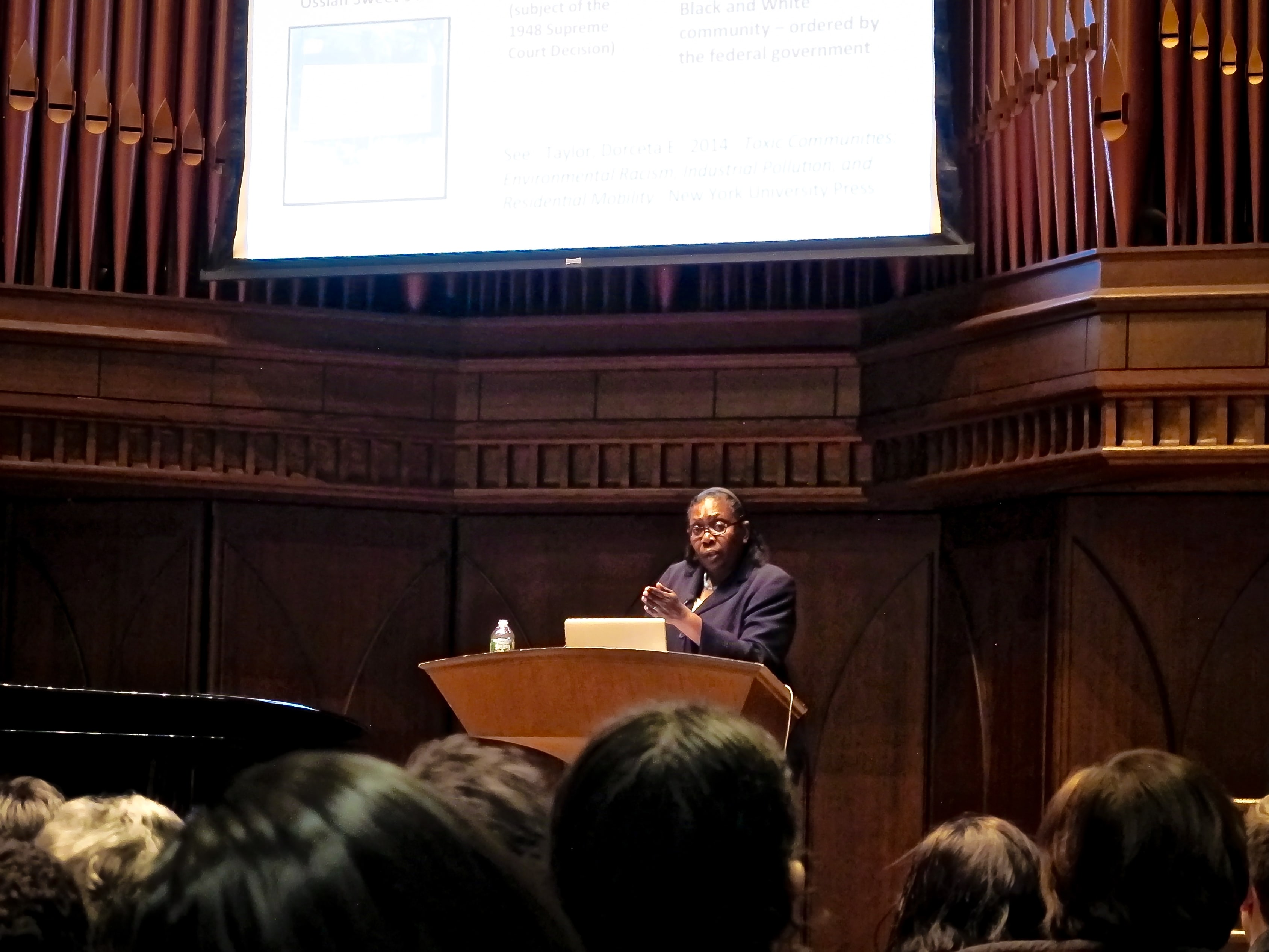 Students, faculty, and members of the Middletown community convened in the Memorial Chapel on Friday, Jan. 29 for Dr. Dorceta Taylor’s keynote address, “Different Shades of Green, or Beyond the Farm.” Taylor, who is a professor at the University of Michigan as well as James E. Crowfood Collegiate Chair, Director of Diversity, Equity, and Inclusion, and past Chair of the Environment and Technology Section of the American Sociological Association, spoke in honor of Martin Luther King, Jr. commemoration week, and her speech served as the final segment of a four-part event series focused on environmental justice.

The event was sponsored by the University’s Green Fund, members of the Student of Color community, the Office of Equity and Inclusion, the Office of Student Activities & Leadership Development, the Office of Residential Life, the Center for African American Studies, the Office of Academic Affairs, and the Allbritton Center for the Study of Public Life.

The ceremony opened with a welcome from University President Michael Roth. He prefaced the lecture by acknowledging the persisting structural injustice, racism, and environmental degradation in the modern world and the urgency of addressing these problems.

“Over the last couple of days with Dr. Taylor…we have been examining the interlocking oppressions and possibilities in the pursuit of environmental and social justice,” Roth said. “There is probably nothing more important for us to pursue.”

Tedra James ’18 then took the podium to provide an overview of the issues to be discussed and how they commemorate the legacy of Dr. King.

“It takes radical love to prioritize strangers half the world away over our own comfort to create activist communities in which every voice—especially the ones traditionally silenced—is valued,” James said. “It takes the radical love that Dr. King taught us to finish the work in creating a just and sustainable world for all.”

An audio clip of Dr. King’s baccalaureate address at the University in 1964 followed to evoke the core values of his legacy. After a moving performance of “Lift Every Voice and Sing” by Associate Director of Career Development and Campus Outreach Persephone Hall, honoring historical community of color movements, James welcomed Taylor to the stand.

Taylor began her lecture historically, describing how certain racial inequities got their roots, specifically the way in which black and brown individuals came to be discriminated against with respect to their location and environs.

“One of the things that we consistently see in history if we look at environmentalism and environmental justice is the idea of controlling the spaces where people of color live, work, and play,” Taylor said.

Taylor explained the way that in post-slavery society, people of color were systematically displaced, leaving them a demographic divided. This type of location-based racism occurred at the hands of urban planners who succeeded in building freeways and other structures that created physical barriers between and within such communities. Taylor described how difficult it was for vibrant neighborhoods of color to exist under these conditions and how this issue is prevalent even today.

She then shifted the discourse to talk about how the same logic applies to the American food system in its unfair treatment of black and brown individuals.

“When you look at black farming in the South, it’s not that blacks don’t want to farm,” Taylor said. “Part of the challenge is they have been discriminated against systematically by the USDA…they’re not given loans, grants, or technical assistance. Doesn’t this sound familiar to the housing crisis that we’ve gone through?”

Though Taylor began by presenting the disadvantages and injustices that face the modern community of color, she closed off her speech by mentioning some efforts in progress aiming to mitigate this type of location-based discrimination as it concerns the food system. She cited Detroit as being one of the most eminent examples of a city attempting to erase its perceived “food desert” stereotype by addressing the issue of food insecurity.

She mentioned the case of UpSouth Foods, a food truck that transports crops from the South up to the Detroit area and how the business is redefining what it means for produce to be considered local. Not only does such an endeavor make healthy foods more accessible to Detroiters, Taylor explained, but it also helps out black farmers financially by bringing their crops to market.

“Food is not always about how many miles you drive to get it or how many miles it’s driven to come to you,” Taylor said. “It’s about this kind of community support and subsistence.”

After a round of applause, Cassia Patel ’17 took the podium to highlight the importance of the issues presented in Taylor’s talk.

“The title of today’s talk is ‘A Different Shade of Green or Beyond the Farm’ specifically to emphasize that environmentalism goes beyond just being a white farmer,” Patel said. “Environmentalism doesn’t need to be, and in fact shouldn’t be, an elitist, classist, or white movement.”

She added that although being an environmentalist is not necessarily indicative of race or ethnicity, this specific community of activists tends to be lacking in diversity.

“An environmentalist is anybody who cares about minimizing the impact on the natural world, which is not only beneficial for future generations, but for marginalized communities today,” Patel said. “I know that the environmental movement on this campus is made of passionate, intelligent, wonderful people who care about this planet and the people in it, but unfortunately…the majority of the environmental community comes from a particular background.”

During the question and answer session, Taylor fielded questions about the ongoing water crisis in Flint, Mich., as well as questions on what local initiatives can be taken in regards to soil quality in Middletown gardens.

Sustainability Director Jen Kleindienst reacted to the sometimes ignored but pertinent interdisciplinary nature of environmentalism and its relation to social equity and inclusion.

Kleindienst hopes the conversation that Taylor started will continue to inspire the community in ways different than ever before.

“[Taylor] thinks about the world in a very different way than most people do,” Kleindienst said. “I’m really hoping that using these insights will help us have these conversations on campus and think about how we can apply this concept of environmental justice here.”

Genna Mastellone ’17, an active member of WesDivest, also gave her input regarding the lecture.

“I thought that it was really important to have Dr. Taylor here and to emphasize her voice,” Mastellone said. “I learned from her and what she taught about the specific ways environmental racism has permeated history in the United States.”