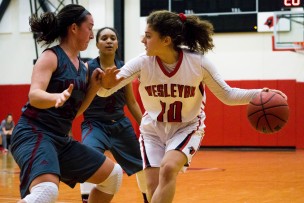 The women’s basketball team squared off against the Rensselaer Polytechnic Institute in the championship game of the Courtyard by Marriott Tournament, hosted this past weekend. It was seesaw battle with multiple lead changes, but the Cards finished on top 72-69 with Tara Berger ’19 sealing the victory with a late layup.

It was the Cardinals’ third straight win as they defeated Anna Maria College the day before 76-51. And with the Redbirds’ great shooting it seems like they won’t be slowing down anytime soon. They have been efficient on both sides of the ball, with their already great defense showing signs that it is getting better as the season progresses. During their winning streak, the team has shot at least 40 percent from the field in every game and has been able to create easier shots for itself with great ball movement.

On Sunday it was Brenna Diggins ’17 who led the team on the defensive end, recording her second double-double of the season grabbing 19 boards along with 16 points. Captain Kaylie Williams ’16 also contributed, with 11 points and 9 rebounds.

The team is performing consistently and quickly gaining confidence with each solid day of work. Last year they struggled with consistency, showing flashes of what the team could be, but just couldn’t put it all together. Williams commented on what changed over the offseason.

“The biggest difference is that we are all on the same page in terms of our goals and what we want to accomplish this season, which has built some of the strongest chemistry I’ve experienced in my time with the basketball program,” Williams said.

Younger players on the team are seeing the difference as well. Maddie Bledsoe ’18 commented on the locker room mindset.

“Every single player on our team has a team-first mentality,” Bledsoe said. “Whether that means diving on the floor, making the extra pass, cheering on the bench, or pushing each other to improve in practice.”

The winning streak is still young but it’s certainly a positive sign for things to come this season and in future seasons. With their only loss being against Amherst, arguably the strongest team in the NESCAC conference, the Cards have inserted themselves into an already crowded field of teams looking to dethrone the Lord Jeffs. Williams says the team is in a good place seeing ball movement as a key to their recent success.

“I think the key has been our unselfish play on offense,” said Williams. “We consistently have shooting percentages in the 40-45 range when we win with multiple players contributing in double figures. I would also say our commitment on defense has been key.”

“For the most part we have been playing our game and not letting other teams affect the way we play,” she said. “A big part of our team identity is how hard we work and our goal for every game is to out-run and out-hustle our opponent and every player on the team goes into the game with that mentality. We have also managed to hold on to the lead in tight games which is a huge step for us this year.”

The Cards see their progress but aren’t happy with everything. Bledsoe and Williams added that they are still hungry and recognize what they need to work on in order to truly establish themselves as real contenders in the NESCAC.

“We have done a very good job this season with getting off to good starts and if we can work on maintaining this energy throughout the entire game without any lapses, it will improve our chances of winning, especially once we get into NESCAC games,” Bledsoe said.

“We definitely need to improve on the amount of turnovers we commit,” Williams said. “Some turnovers are going to happen but we need to limit the amount we have been averaging.”

Wesleyan’s NESCAC schedule doesn’t start to heat up until January, but they do have a few games before the start of winter break, including a bout against Williams this Saturday. Before that, they will be taking on Rivier University on Wednesday in the Silloway Gymnasium at 7 p.m. 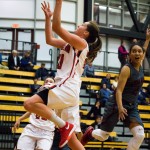 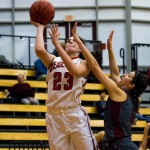 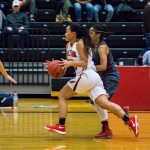 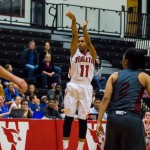 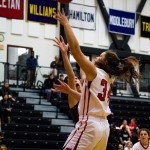 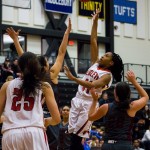 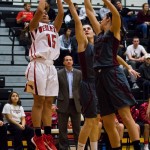 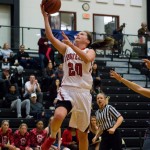