Despite several shortcomings, "Sweeney Todd" pulls through with its ambition to reinvent. 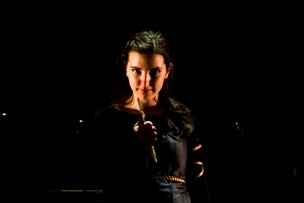 What more could be done with Hugo Wheeler and Stephen Sondheim’s masterpiece, “Sweeney Todd”? Since 1979, audiences everywhere have been asked (or rather, commanded) to “attend the tale of Sweeney Todd,” and embark on a terrifying journey into Victorian-era London and romantically-fueled revenge. After two runs on Broadway (the 1979 original and a revival in 2005), a 2007 movie starring Johnny Depp, and countless regional productions, what new depths could be mined from “Sweeney”?

This challenge is one that has been (mostly) met by the likes of Maia Nelles-Sager ’17 and Emily Butcher ’17, in their production at the ’92 Theater from last week. Rather than go for the traditional staples of a “Sweeney” production (large sets, a chorus in tattered clothes embellished with dirt, a chair center stage for Sweeney to murder his victims, etc.), Nelles-Sager and Butcher’s production goes abstract.

It is perhaps best described by Nelles-Sager.

“We’re using dancers…we don’t have a chair…Oh, and Sweeney’s a woman,” she said.

Indeed, in a rather contemporary twist, Mr. Todd is now Ms. Todd, played by the strikingly intense Melanie Parziale ’16. She is unlike the traditional Todd in more ways than one. Rather than a large, towering, baritone-voiced sociopath, Parziale is small, short, and more of a soprano, but still packs a terrifying punch.

But more striking than gender-swapping Sweeney is the decision to include dancers. On stage nearly the entire production, six dancers (Nicole Brenner ’19, Nick Byers ’19, Shana Laski ’19, Darcy Neureiter ’19, Maddy Paull ’19, and Alexa Strauss ’19) dressed fully in black, played ensemble roles, and danced original choreography. At times, Butcher’s choreographic design is strikingly beautiful. During a scene in which Anthony (Liam Tran ’17) purchases a linnet bird, Butcher has Paull perform as the bird itself. It could very easily come off as distracting or strange, but it’s elegantly performed, and surprisingly affecting. Butcher’s choreography was also, at times, disturbing: when Judge Turpin (Joey Cahn ’18) repeatedly whips himself for his sinful lust for his adopted daughter, Johanna (Alina Whatley ’18), the six dancers surround him and seductively tug at him. Moments like these showcase the brilliance of Butcher’s choreography, conveying emotions in ways that wouldn’t come across in a more traditional production.

But the success to any “Sweeney” production relies heavily on its singers. Thankfully, Nelles-Sager assembled a mostly delightful cast. Parziale’s voice is gorgeous and incredibly distinctive, while also capturing the intensity required of any Sweeney. As Mrs. Lovett, Tekla Monson ’18 brought a brisk and manic spirit to a character widely considered the true star of the musical. Monson had occasional issues with diction or projection, but this was understandable considering the immense difficulty of the part. As Johanna, Alina Whatley ’18 brought her gorgeous singing voice and nimble acting ability. However, the true standout was Anna Apostolidis ’19 as Adolfa Pirelli, whose operatic voice and comedic chops made her the clear standout in the cast.

A few minor directing choices of Nelles-Sager caused some presumably unforeseen problems. By placing all of her singers backstage, it became difficult to hear Sondheim’s lyrics during the various reprises of “The Ballad of Sweeney Todd.” There is also a notable amount of dialogue that was clearly cut from the show, most likely to reduce the run time. Unfortunately, a lot of excellent scenes that focus on character development are missing, and, combined with the often rushed pacing, the show, at times, feels incomplete. Moreover, the decision to add choreography to the show, while mostly excellent, is indeed distracting and unnecessary, at times.

But ultimately, the show captured the violently romantic spirit of “Sweeney Todd.” While the musical has always chronicled a dark, disturbing tale, this production harnessed the emotion at the heart of it all: love. Judge Turpin’s love for Sweeney’s wife (which occurs before the play) leads him to falsely accuse and then exile Sweeney and rape Sweeney’s wife, sending her in a tragic downward spiral. Johanna and Antony’s love lead to violence and murder, both enacted against them and committed by them. Sweeney’s desire to avenge her wife leads her to murder a sizable portion of London. Mrs. Lovett’s love for Sweeney leads her to encourage her murderous actions and make a few unsuspecting Londoners cannibals. Etc, etc.

This production of “Sweeney” adroitly captures the paradoxical connection between love and violence. And what a beautiful show that violence created.