"The Good Dinosaur" is fun holiday fare--just don't expect it to rival "Inside Out." 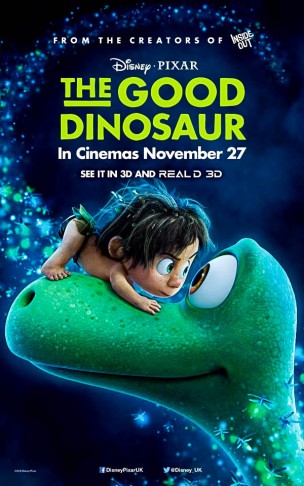 Following this summer’s release of “Inside Out,” the beloved film that gave life to emotions, Pixar Animation Studios is more respected than ever. For the first time, Pixar has offered two animations in a single year. The second,“The Good Dinosaur,” opened just in time for Thanksgiving. While it is nowhere near as innovative as “Inside Out,” Pixar’s latest shines on its own through its exemplary visuals, complex characters, and concise storytelling.

The story of “The Good Dinosaur” can be best summarized with a simple question: What if dinosaurs had not gone extinct? In Pixar’s counterfactual, they evolve into intelligent beings, who grow crops and domesticate animals. Our hero is Arlo, a dinosaur who lives with his family on a farm next to a river. He dreams of finding his true place in the world, but repeatedly fails to be of help with his family’s farming tasks. Ultimately, after encountering an unknown creature—a human, to be exact—Arlo embarks on a challenging journey that will provide him with a last chance to prove his worth to his family and to himself.

Unlike many other Pixar originals, “The Good Dinosaur” doesn’t bring much new to the table with its plot. The story has been told in many forms before, and the ending is quite predictable. However, it is the film’s elegant execution that makes “The Good Dinosaur” stand out among similar films. Perhaps the movie’s most masterful aspect is the complexity of the main character, especially compared to the way in which humans are portrayed. Throughout the story, humans and dinosaurs are incapable of understanding each other through language, mainly because humans have not yet learned to speak. Although the audience is able to understand the dinosaurs’ conversations, the most touching moment occurs when a dinosaur and a human try to express their feelings to each other. These halting attempts show us that universal concepts, such as love and family, can be communicated across species and without language. Although the film lacks complicated vocabulary, it never reaches a level of simplicity that would render it a kids-only title; Pixar has succeeded in producing a movie about talking dinosaurs that viewers of any age can enjoy.

Needless to say, Pixar has created yet another visual masterpiece with “The Good Dinosaur.” The landscapes and backgrounds in this movie are so vivid and full of detail that I had to pay close attention in order to ensure that the animated characters were not mounted over live footage. The characters themselves are designed in a colorful, eye-popping fashion, appearing simple from afar but gaining complexity up close. In addition, the environment’s effects on the characters’ bodies are handled gracefully. For example, you can clearly see the scrapes on Arlo’s knees each time he injures himself falling on the ground.

With “Inside Out” already guaranteed to sweep this year’s awards for Best Animated Feature, there is a high chance that “The Good Dinosaur” will go unnoticed unless it’s promoted by its growing fandom. (Moreover, I don’t believe that the story has enough potential for Pixar to start a new franchise.) Nonetheless, it is one of those feel-good movies that will leave you refreshed after watching. It captivates its audience and takes care of them from the beginning until the end. So if you still believe in Pixar and its power, don’t miss your chance to catch “The Good Dinosaur.”