Who Wore it Wes: Lauren Langer

Lauren Langer ’16 sat down with The Argus to explain her effortless style. 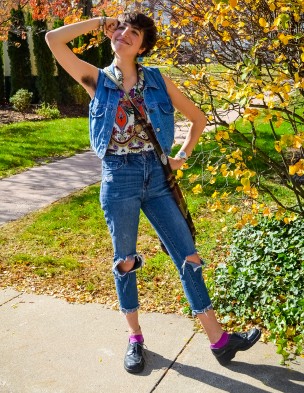 Biology & Environmental Studies major Lauren Langer ’16 is ready to stylishly subvert your expectations. The Argus sat down with her to talk denim, effortless fashion, and armpit hair as an accessory.

The Argus: How would you define your personal style in three to five words?
Lauren Langer: Denim on denim, grandma chic.

A: What makes you cringe when you look in the mirror?
LL: Not enough denim… [or] it looks like something I would have worn in high school. If it looks like I spent more than 10 minutes preparing it.

A: Would you say being effortless is an important part of your style?
LL: Yes, and sometimes that requires a lot of effort.

A: How much does something like lack of effort versus not looking like you’re in high school take priority? What’s the big goal in what you wear?
LL: In high school, I put together some elaborate outfits….And honestly, there are days [now] where I probably spend just as much time putting together an outfit. Even though I’m embarrassed to say it, I have spent, like, 40 minutes fashioning an outfit that is designed to look like I just threw it on. But sometimes I do just throw on my clothes.

A: So if an outsider were trying to guess whether [or not] you’d spent a lot of time on your outfit, what would the giveaway be?
LL: If the socks match, I probably put some effort into the outfit.

A: What inspires your style? You mentioned grandma chic. Are you a thrift store kind of person?
LL: I think I’m just a big grandmother lover. I really love my grandma, [and I’m] really just trying to emulate her style and her casual energy. I like to say I’m a thrift store shopper, because that’s very in, but every time I go to the thrift store, I just find, like, the ugliest shit! Although I guess both of these [gestures to shirt and denim vest] are from thrift stores. So I get lucky sometimes.

A: Who are some of your style icons?
LL: Paul McCartney…[and] Rosie the Riveter.

A: And where are you from?
LL: Chicago.

A: Has that influenced your style at all?
LL: I don’t know. I have very little perception of what the style is in Chicago. I’m also from the suburbs, so…I don’t think that influence has touched me all that much.

A: What about coming to Wesleyan? How has that shaped your fashion?
LL: It’s really made me up my game. People here…dress very well, but in a way that’s kind of like a competition of who could care less, who could have the most casual style. And honestly, the simpler someone’s outfit is, [the more] I’m like, “Oh, you must have spent a long time on it.”

A: Wow. That’s really fascinating. And for you, if you were to actually just throw something on, what would that look like?
LL: My go-to, really, is denim on denim. I really like jeans; I think they’re comfier than sweatpants sometimes.

A: What’s your favorite article of clothing?
LL: Jean jackets and vests. Denim everything.

A: And what’s your favorite season to dress for?
LL: Summer, [because] it allows me to put together the simplest outfit with the least items of clothing.

A: How do you feel about showing skin?
LL: Skin is great. I would emphasize being comfortable. I think some people prefer to dress for winter, and they just like to be more clothed, in sweaters. And I prefer looser, less restricting, and less material.

A: Okay, so shorts over pants?
LL: Yeah.

A: I have special insight from being in your writing seminar [WRCT250: Literary Journalism], where you talked about dressing to highlight your armpit hair. How does that play out when you’re choosing items of clothing?
LL: It’s interesting, actually, because sometimes I feel this dissonance—like when I dress for work at Admissions, and I have to dress business casual. So I’ll wear a nice dress that maybe isn’t quite my style but is appropriate for a work setting. And I just feel this dissonance between, like, the formality of the outfit and the casualness of my armpit hair, and they kind of seem to be [in] conflict.

But I actually really like that… I don’t want to say “subversion of expectations”—that’s such a common Wesleyan phrase—but I like to challenge that stereotype. Like, I don’t want to be necessarily labeled as “dirty” and only wearing overalls. I want to be able to wear heels and a tight black dress and also rock the armpit hair with it.

I mean, I do like overalls, and I do like to be dirty, but I don’t want my armpit hair to dictate that. I think my armpit hair can complement really any item of clothing; it doesn’t limit my fashion choices in any way.

A: What’s your favorite place to shop for clothes?
LL: My friends’ closets. Also, my brother’s closet.