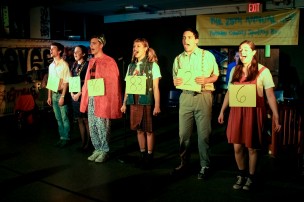 Pre-pubescence is an awkward time, and not one that we tend to look back upon fondly. It lies smack in the middle between the joys and freedoms of childhood, and the excitement of early adulthood. It’s a time full of more awkwardness than we’d like to be able to remember, but it’s also a time in which we can shape the course of our identities and our lives. And there’s a musical playing at the WestCo Café that beautifully understands that.

“The 25th Annual Putnam County Spelling Bee” was a musical deemed by many to be an instant classic once it hit Broadway. Written by William Finn (music and lyrics) and Rachel Sheinkin (book), it won two Tony Awards, was beloved by critics, and featured future Broadway star Celia Keenan-Blogger and future “Modern Family” star Jesse Tyler Ferguson. The show was adorable and insightful, sad and funny, bittersweet and uplifting.

The plot is simple, if a bit scattered. Rather than follow a traditional, straightforward arc, the musical shifts between the various main characters. Each of them has a song (or several), in which they reveal their various issues, many of which deal with the longing for acceptance and love. The songs are surprisingly powerful, with the surface awkwardness and quirks giving way to reveal tremendous emotional depth. But, like much of adolescence, it is also as funny as it is heartbreaking.

“I have been in love with this show since 7th grade, and I have a very, very sweet spot for musical theater,” said director Jessica Wolinsky ’17. “So I wanted to direct this show at some point in my Wesleyan career.”

The show is perhaps as easy for a middle school student to connect with as it is for a college student.

“Through mayhem they learn all about who they are, and they discover that there is more to life than spelling,” Wolinsky said. “If they have a passion they should pursue it.”

Indeed, it’s heartwarming to see the characters discover what they love. It’s equally distressing to see some of them unable to move on from their childhood glory.

Thankfully, Wolinsky has assembled a uniformly excellent cast. The standout is definitely Kathleen Radigan ’17, who brings tremendous, focused energy, and chronic discomfort to her character, Logainne. Beyond that, she’s a singer with a beautiful voice that can move audiences to tears. Molly Bogin ’18 brings an optimistic sorrow to her dictionary-obsessed Olive. Her longing for parental love is brought to the surface in “The I Love You Song,” a momentous scene between her and her parents (Julia Tyminski ’17 and David Caruso ’18), as she lights up the stage with her radiance. Tyminski is also an especially excellent singer. Alex Minton ’17 brings both obnoxiousness and likable vulnerability to William Barfée (pronounced with an accent). The rest of the cast, too, is funny and sharp.

But the cast listed in the Playbill aren’t the only ones who get to join in on the fun. Indeed, at each performance, several audience members are asked to sit onstage and participate in the spelling bee. Bits of the show are improvised with the obviously (and hilariously) uncomfortable audience members, as they attempt to spell bizarre words and dance along with the choreography.

Enough cannot be said about the show’s songs. As written by Finn, they have an instantly noticeable originality in both their sound and lyrics. They’re upbeat and punchy, but sad at the same time. When Leaf Coneybear (Johnny LaZebnik ’16, wonderfully weird) sings “I’m Not That Smart,” one is instantly struck by the song’s quirky tone. It’s a sad thing to say about oneself, but Leaf smiles and dances gleefully, even as he describes his parents and family yelling at him for being stupid.

Odder still, while reprising the song after misspelling a word and becoming disqualified, he seems to radiate even more brightly than before. It’s this oddness that allows “Spelling Bee” to explore adolescence in a realistic way. The show is neither smeared with nostalgia nor overtly bleak. It depicts adolescence as a time when sadness creeps into our lives, but we remain happy anyway.

The spelling bee contestants constantly must stare in the face of tremendous pressure to succeed, whether it’s internalized or coming from family members or other external sources. Of course, this is not unlike the pressures faced every day by college students, at Wesleyan or otherwise. But “Spelling Bee” suggests there is joy in failure, both the freedom to not be subjected to pressure, but failure’s ability to bring people together. And if you’re someone like me, who just received several terrible midterm grades, comfort in failure is probably exactly what you need. Take my advice: Go see “Spelling Bee.”