Amy Schumer's new special is good, just not as good as one would hope. 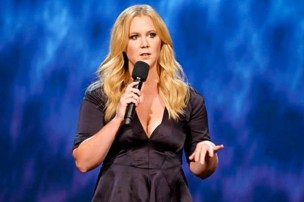 Amy Schumer is 2015’s Jennifer Lawrence: a celebrity whose rise to fame comes out of nowhere, but who quickly establishes herself as a household name, complete with a distinctive image. Whereas Lawrence was a champion for women in blockbuster cinema, Schumer is a different kind of feminist icon: the type who bashes the double standard for women. Schumer opts to prove through comedy that women can be just as obscene, crass, and poorly put together as the frattiest of frat boys. In her new HBO special, “Amy Schumer: Live at the Apollo,” Schumer takes this self-deprecation to new levels. But, in the process, she forgets that her sense of satire is more powerful than that of self-inflicting insults.

When Schumer does aim to satire society, she almost always succeeds with flying colors. Early in her set, she brilliantly mocks Hollywood’s insane expectations for female beauty. She berates the movie “Zookeeper” for featuring Kevin James in a role in which he dates a “beautiful blonde skeleton.” And of course, the girl who loves him but whom he ignores is played by Rosario Dawson, or, in Schumer’s words “arguably the most fuckable actress ever.” Of course, this is unrealistic, Schumer points out, and her acknowledgment of a major problem by mocking its seemingly obvious issues is hilarious and comforting.

Better still is Schumer’s own personal account of Hollywood producers. Explaining how she was able to get her movie “Trainwreck” produced, Schumer described a conversation between her and her producers. They of course tell her to stop eating. “Don’t people need food?” Schumer asks them. “That’s a myth,” her nameless producer responds. She recounts how her trainer winced at her like he was trying to “be brave for a burn victim.” In one potentially insensitive but nonetheless audacious moment, she wonders about procuring an eating disorder instead of exercising (“I’m a white girl, right?”). Schumer’s brilliance lies in her ability to turn depressing realities into wonderfully funny satire.

But, bafflingly, this represents a fraction of Schumer’s special. Much of her set involves “shock-value” crudeness and intense self-deprecation. Both of these are, of course, fine. But they are not used with enough deliberate purpose, nor are they used sparingly enough. Over time, it becomes increasingly difficult to tell some of her bits apart. She refers to tucking herself in as having some “wine, weed and ambien” or mentions how women never know what their vaginas look like. It’s funny at first, sure, but it’s hardly diverse or deliberate enough for several minutes of stage time. Nor is it up to Schumer’s high standards.

Schumer’s standards have been set by her Emmy-award winning show, “Inside Amy Schumer,” which deftly tackles some of the darkest, most discomforting issues in modern society. With her show, Schumer was able to satirize subjects as dark as sexual assault, to those as light as “Disney Princess culture” in ways both meaningful and hilarious, simultaneously raising awareness of the issues while also having a well-earned laugh. She is bold enough to devote an entire episode of her show to a detailed parody of “Twelve Angry Men” and the double standards of female beauty on television (including, of course, a flurry of insults aimed at herself). She has critiqued popular songs that appear to celebrate natural beauty, but exist in a context where “natural” means covered in make-up. Her satirical skills are nothing short of brilliant. With her show at the Apollo, Schumer mainly focuses on her less compelling self-deprecation.

The most bizarre problem with the special, however, isn’t Schumer, but Chris Rock’s direction. The director of a stand-up special is supposed to do as little as possible, only allowing for the star to be heard and seen properly, and for her jokes to land with the audience. Why, then, does Rock randomly zoom in and out of the stage while Schumer is in the middle of setting up a joke? Why does he cut to Schumer’s reaction to a joke more than the audience’s? Why does he make it incredibly obvious that bits from Schumer’s performance were cut for time? It’s a series of odd choices at best, and a truly distracting at set of choices at worst. Most of the time, it’s the latter.

In spite of being a bit of a slog (for Schumer’s standards) in the mid-section, she thankfully ends things on a high note. She discusses how sperm creates life (in cruder terms) stating that Ghandi and Oprah are essentially sperm (“Oprah could have wound up on someone’s tits”). Then, she mocks her uncomfortable audience for treating sex as gross in spite of the fact that it is entirely natural. She berates society for telling girls that men will only want to sleep with them with the presumption being that women don’t enjoy sex. She mocks sex positions for always being satisfying for the guy and hell for the girl. Its Schumer’s satire at is very best: crass but sophisticated, funny but insightful. Yet, tragically, this only represents a fraction of Schumer’s latest gig.