Los Angeles-based Harriet dishes on the difference between the LA and Brooklyn music scenes. 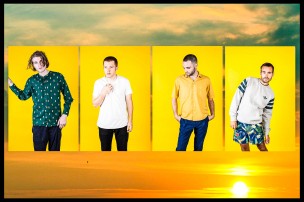 In an age where bands have steeped themselves in alternative hipsterdom, Los Angeles-based band Harriet adopts a more traditional mentality. On Thursday, October 22nd, the alternative-Americana quartet will headline their first east coast show at Eclectic. Formed in 2011 by former Dawes keyboardist Alex Casnoff, Harriet, which includes Patrick Kelly (electric bass), Matt Blitzer (guitar) and Henry Kwapis (drums), are one of Harvest Records newest signees and are preparing to release their debut album in January. Casnoff, whose songwriting has been described as “strong on storytelling and melody,” sat down with The Argus before his Eclectic show to talk about the Los Angeles music scene, the songwriting process and struggling with self-doubt.

On the Songwriter Process and Harriet’s Artistic Approach

Alex Casnoff: I think that our ideal, although this sounds a bit pretentious, and I don’t think we’ve reached it yet, is Paul Simon’s songwriting with Radiohead as the backing band. That would be our ideal (laughs). It’s just about sort of American songs taken with a more experimental approach with the band. Usually, I write a song and I bring it to the band and we suck it up as much as possible. And sometimes that means that the song form changes or that a new bridge is written or that something completely different happens.

The Argus: Do you have artists like Paul Simon in your mind for artistic inspiration when you’re writing music?
AC: I just saw Randy Newman this past weekend and I sort of realized that I think he is my biggest songwriting influence, although I’m not as funny as he is. I’m working on that. But, I think for me, while some of the songs come from my perspective, a lot of it is about getting into other characters’ heads. A lot of the songs are from perspectives different than mine, and unreliable narrators.

A: Using the example of Randy Newman, what is the process of injecting humor or irony into your music?
AC: Well I don’t know if I’ve figured it out yet. I don’t know if my songs are that funny. But I think there’s sarcasm in our songs. For me Randy Newman is able to make me laugh out loud, which I definitely haven’t done in my own music. He’s able to make me laugh out loud and break my heart in the same song. And I don’t know exactly how you do it. Every time I try and write a song that’s funny it ends up being kind of shitty.

On Americana and American Songwriting

AC: I think it’s mostly in the basis of the song, which is just about telling a story and having a viewpoint from the lyrical perspective. But then from the musical perspective, some of the songs sound American but a lot of the songs are actually not. And I think that’s just because we try and fuck it up and everybody listens to a lot of different types of music. That’s just where I come from a song basis perspective. And I think we always try and start with the strongest sort of roots and just stretch it as much as possible, as far away from that as we can.

A: Any music you’ve listened to recently that has inspired your creative process?
AC:  We just made a playlist on Spotify, and we’ve been adding songs to it and stuff. But I mean I really [like] the most recent Unknown Mortal Orchestra album a lot. I’ve also been listening to a lot of classical music recently.

A: It’s a typical thing for a lot of young, indie bands, and Wesleyan students as well, to go do the Brooklyn thing. Why did Harriet decide to stay in LA?
AC: It’s sort of just a practical thing right now. We all lived here and there was no reason for us to move.

A: Do you see any major differences between the LA and Brooklyn music scenes?
AC: I think that from playing in New York last night for the first time there is a different type of energy in New York, and I think there’s a weird thing in LA sometimes where people are very protective of themselves with their bands and are not as apt to help each other. And yesterday we had three of our friends bands come up to us, who are Brooklyn bands, and were like, “Yo, we’re taking you out on tour, when are we going on tour?” In LA, it’s always very trepidatious like, “I don’t know if this is the right look for us.” I don’t know, it seems like there might be more of a community in New York. And, I might be wrong, this is just a first impression. Everything looks good on the first day.

A: Why do you think the culture of LA bands is less congenial?
AC: I honestly don’t know. You could talk about it, but I don’t experience the shallowness of LA all the time. But that’s definitely a thing people talk about. But I think for me, all my friends, I have really close friends I grew up with in LA, and I love LA. So, that’s the way I experience LA. Honestly, you know what I think it is, I think it’s because of the way the city is set up. The city is set up for you to sort of quadrant yourself off. Because it’s so separated. And, I think in New York, people just talk to each other more because they are always in constant contact.

A: So, you think it’s people sharing the same venue and social spaces that creates a tighter community?
AC: Yeah, I think you can’t help but bump into each other all the time. Even with non-musicians, Matt, our guitar player, was just mentioning yesterday how much nicer people are in New York. Because, you bump into people walking down the street and you have a conversation with them. In LA, you like put your head down and try not to look into anybody’s eyes.

On Life Signed to a Label

A: Does being signed to Harvest Records change your creative process or the way you approach making an album?
AC: The main thing it’s changed is that we finally got a release date for the record because we’ve been working on it for three years. Three years is a really fucking long time to be working on the same thing. Although, [the record] changed a lot. And, I think at the end that was a good thing. Because we wrote a lot of new songs and were just sort of forced by the time, because we weren’t going to sit around waiting. So, the record changed a lot and I think it ended up getting a lot better. But, no I mean, I don’t think our process has really changed in terms of making music.

A: Something I’ve always wondered, if what happens to those songs left on the cutting room floor? Do you ever have the urge to release those tracks and see how they play?
AC: Well, I think at the end of the day it was our choice to leave them on the cutting room floor. And, because it took so long, we didn’t write the album as an album. We wrote individual songs. When we sat down and listened to it, thirty minutes in we were all like, ugh, this is getting a little boring. It’s not like we didn’t think they were good songs, but they weren’t making a great record. So we decided that we needed to go back in the studio and write a song that would change the tone. We had a lot of mid-tempo sad songs, which were just getting overwhelmingly depressing (laughs).

And, I think when you play live, you realize what works and what doesn’t. And things work differently on record than they do live. But I think we realized that we wanted a few more songs that were really fun to play live. They would also pick up the slack in the middle of the record. So we wrote a few more songs. But yeah, I do want to release them. I feel proud of them and we worked hard on them and I think they’re good. There are a lot of ways now to release things like that…. We’ve been talking about maybe doing a bit torrent bundle where we release some of the unreleased tracks and demos and stuff.

A: Do you think a lot about how songs will play live when you write them? Does the live performance aspect steer the direction of the record at all?

AC: Yeah, I think like you said earlier, you don’t really come up with anything good when you’re trying. So if we want to make a song where we are trying to make people dance, it’s not going to. But, I think it’s sort of inherent in what you listen to and what you’re soaking up at the time. I think it was just sort of a sub-conscious thing, where we were just like, “We need some songs that have more energy live.” And, it just sort of happened. I think I was still actually bringing in mid-tempo sad songs, we were just arranging them differently, and made the drumbeats twice as fast. I don’t think the process changed that much.

On Struggling With Doubt as an Artist

AC: Yeah, I mean who doesn’t. I think especially as an artist you sort of suffer from this huge gap from between an insane ego and thinking you’re the best thing in the world and then thinking you’re the shittiest thing ever. And, there’s not much middle ground. And you write a song one day, and are like, “Fuck yeah, I’m incredible.” And the next day you’re like, “Oh my God this is terrible; I’m never going to write a song again.” I think that’s just sort of the battle of the artist and trying to find a way to balance that out. I think when you’re an artist, you’re kind of on your own and when you write something, once it goes into the world, you have no control over how people interpret it or hear it. So it’s a scary thing definitely.

A: How do you balance your conflicting emotions to find the truth in between? Or what’s really good or not?
AC: I think that you can’t think about that too much. You have to have a gut impulse. For me, if I get goosebumps from the song or the recording, if I feel like an emotional response or I feel like it’s making me want to dance or something, that’s all I want to do. If I start trying to intellectualize what some critic is going to think about this song, I’m fucked.

Because then, I’m going to stop expressing myself truthfully and I’m going to be censoring myself in this way or that way. So, for me, anything from going on a run or going to a movie, it’s good to just decompress. You just can’t think about that, because that’s when you start second guessing things, which I think is the enemy of the creative process.