“Goosebumps” Delivers a Middling Combination of Laughs and Scares

In "Goosebumps," Jack Black and Dylan Minnette face off against a hodge-podge of things that go bump in the night. 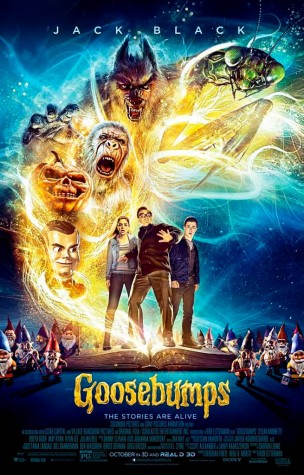 With two starring roles in major projects this year, the HBO political satire “The Brink,” and the film “Goosebumps,” it would appear that Jack Black is having some kind of late career comeback. Black fell out of public favor after several mediocre comedies (Gulliver’s Travels, The Big Year) and his successful films hid his face from view (voicing the lead in Kung Fu Panda and its sequel). Yet the critically dim reception to “The Brink” signaled this comeback wouldn’t reach McConaissance levels of greatness. Could “Goosebumps” be his sole comeback vehicle? Based on the film and his performance, that seems like wishful thinking at best.

After the death of his father, Zach (Dylan Minette) and his mother (Amy Ryan) move to the small town of Madison, DE, becoming the neighbors of a strange, elusive man (Black) and his daughter, Hannah (Odeya Rush). After hearing what seemed to be Hannah and her father in a fight, Zach and his nerdy friend Champ (Ryan Lee) investigate their house, stumbling upon a collection of locked books. Of course, these are the manuscripts of R.L. Stein, the elusive father of Hannah, and because this is a children’s movie, opening them releases Stein’s monsters upon the world. One of these creations, a talking ventriloquist doll named Slappy, decides to release all of Stein’s monsters. Which will grant him vengeance. For something. Somehow. Ignore the details: the 103 minute film moves far too fast to let audiences consider them.

The screenplay, penned by Darren Lemke (“Shrek Ever After,” “Turbo”), is pretty much what one would expect from an action-adventure movie for children. Its sense of humor is mainly aimed at kids (Adults don’t understand twerking! Math homework sucks! Youtube!) with a few jokes that are meant to fly over their heads to ensure that adults can have a laugh or two themselves (Police think teenagers are on drugs! Audiophile sounds like pedophile! Napoleonic complexes!). Don’t forget about the forced and obvious character arcs, like Stein confronting his demons, or the nerdy kid doing something heroic and becoming cool (Get it? The kid named Champ becomes a real-life champion? Do you get it?). Or the forced romance between Zach and Hannah. Or the scene in which Champ hooks up with a hot girl because he saved her from a werewolf (Yay?).

Surprisingly, Lemke does craft a few moments of emotional honesty. Hannah, predictably, is one of Stein’s creations. Unpredictably, she’s aware of this. It paints her attempts to escape her father’s control as surprisingly tragic. The scene in which she and the other monsters are (spoiler alert if you’ve never seen a kid’s movie) destroyed ends with a heartbreaking sentiment: “I’ll be inside your head, and that’s where I belong,” she tells Zach. It’s a surprising insight into the power of imagination, and I’d be lying if I said I didn’t choke up a little bit.

Much of the success of this scene, however, relies on its young and unknown cast. Minette, tasked with the thankless job of being a bland protagonist, is charismatic and instantly likable, the sort of everyman that Lemke’s script aims for but with much more depth and likability. Lee’s performance is even more impressive than Minette’s: rather than let Champ be as unlikable and obnoxious as Lemke writes him, he is easy to root for and understand. While Rush is the weakest of the main trio, she’s also the most thinly written, so the fact that her character is memorable in the slightest is impressive.

But really, the movie’s protagonist is Stein, and Black’s performance is inconsistent to say the least. Black’s satire of pretentious, aloof and illusive authors is spot on, brilliantly selling lazy satire. His line, “The night was cold… Cold was the night!” shouldn’t be as funny as it is in Black’s hands. Yet Black is weak at actually playing the character. He’s far too goofy to pull off such an enigmatic character. Unlike many of the great comedic actors, Black cannot do comedy and drama, only the former.

Occasional moments of emotional honesty and satire aside, what elevates “Goosebumps” from mediocre status to slightly above mediocre status is its director. Rob Letterman (“Monsters vs. Aliens,” the aforementioned “Gulliver’s Travels”) keeps the movie running at a brisk, light pace, never slowing down for too long. Because of this, the obvious flaws in the movie and otherwise cringe-worthy humor are less noticeable. More to the point, it keeps the action energetic and engaging on some level, even if the events on display are mostly a hodge-podge of CGI and Jack Black-goofiness.

Ultimately, “Goosebumps” is the definition of an above-average kid’s movie. It won’t bore or excite you, but it’ll tire you a little. You’ll laugh once for every time you cringe. You may choke up once or twice, but you’ll also roll your eyes. If you must babysit someone, this is probably this best movie to take them to. Otherwise, spend your money elsewhere, like, on a viewing of “School of Rock,” or another movie that involves Jack Black at his prime.