Argus Editor Abroad: Seeking Sports in the Land Down Under 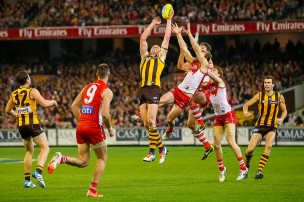 Study abroad is a period where students explore their thirst for travel and desire for fresh challenges. Most immerse themselves into an uncharted culture through language, such as speaking purely Spanish while in Madrid, or traveling to the remote, rural Mekong Delta where barely anyone speaks a lick of English. Pasta alla Carbonara in Rome or Biltong in Cape Town are not just options that please the taste buds, but also open links between cuisine and a society’s lifestyle. Visiting monuments also provides a spark of joy and a lasting supply of remarkable memories, whether it’s trekking through the Sacred Valley for days on the way to Machu Picchu, or staring down the Eiffel Tower for the first time when reaching the seventh arrondissement of Paris.

During my stay in Sydney this fall, I felt eager to investigate Australia through sport, trading American football for Australian rules football (AFL) and baseball for cricket. Following domestic sports gives me a newfound appreciation for the land Down Under, and allows me to not only understand the history of this nation more fully, but also glimpse the cultural and economic disparities between each team’s communities.

Though I still don’t fully comprehend the nuts and bolts of cricket, I want to briefly explain the guidelines of three sports unknown to many Americans and their impact on my experience abroad: rugby league, rugby union, and AFL. All require big hits, smart strategy, and, unlike the United States, these sports entail no protective headgear, something Australians claim pride over.

Rugby league consists of 13 players on each squad, sharing an approximately 130-yard-long and 74-yard-wide pitch. There are two general positions: forwards, who are generally strong and large, and are expected to take and dish out monstrous hits, and backs, who tend to be quick and small, and can create fast-break opportunities for their team.

The objective is to run past the opponent’s goal line while only passing the ball backwards. Kicking the ball forward as a pass is a risky but rewarding method of advancing the ball if the backs are speedy. Once reaching the in-goal area, the player must touch the ball down on the ground in order to receive a “try,” and four points, which can be equated to a touchdown. The conversion attempt is worth two points and occurs at any point parallel to where the ball was placed on the try, so it is essential to score as centrally as possible. Each team gets six tackles to score, but often, after five unsuccessful runs, a kick will take place to pin the other team deep in their own territory, strategically similar to punting in American football.

On July 31, my abroad program took its students’ to a rugby league event, with the local Sydney Roosters going up against the Canterbury-Bankstown Bulldogs. At the beginning of the match, I was unimpressed due to the lack of fast-paced play and scoring opportunities, but as time progressed, I became absorbed in the game. The Roosters emerged victorious in emphatic, last-minute fashion, but I gained much more than a few cheers and a delightful celebration; I experienced firsthand the discrepancies between Sydney’s eastern and western suburbs through rugby.

The Roosters supporters generally hail from the eastern districts of Sydney and are wealthy. Every time the Roosters made a nice play, or needed a huge boost, their fans at Allianz Stadium would scream “East!” The Bulldogs enthusiasts live in Western Sydney and are largely lower-income. The West contains a high level of ethnic diversity. Indeed, more than 50 percent of families speak a language other than English at home. The Bulldogs fans were loud and enjoyed creating confrontation with the opposing supporters.

This clash of classes started in 1907 when the Code of Rugby League was established based on geographic locations. The majority of young players end up playing in the same city for the entirety of their career, unlike American sports, where players frequently trade teams and often follow the money.

Rugby League has not only left an impact on my love for sport, but has also shown me how competition can unite a community but divide a city, i.e. the New York Yankees and New York Mets. Although I wouldn’t trade another New York Giants Super Bowl win for a Sydney Roosters rugby league championship, I will continue to monitor my newest squad when I return home.

Rugby is played throughout the entire country, but is truly cherished in the state of New South Wales, where Sydney is located. This is mainly because the rugby union team, the Australian Wallabies, recruits most of its players from the area.

Rugby union is currently hip in Australia, as the Wallabies just capped off an undefeated group stage in the 2015 World Cup, which featured huge wins over Wales and the tournament’s host, England. Australia will face Scotland in the quarterfinals, and its defense will be the deciding factor in how far they proceed in the tournament.

Rugby union is similar to rugby league, but fields 15 players for each team, with seven forwards and eight backs. There are no limits on tackles in this international game, so a team can maintain possession as long as it does not commit a penalty or lose the ball. A try is worth five points in rugby union and the ball is in play for much longer periods of time. When the ball goes out of play, possession in rugby union is contested through a line-out, which is similar to a throw-in, while in rugby league a scrum restarts play, which is a large pile of individuals fighting to gain possession.

One of the highlights of my semester thus far was visiting Olympic Park in Sydney to see Australia battle against world number one, New Zealand, in front of a sold-out crowd of 83,500 spectators. I wore a yellow Wallaby onesie to the game, in support of the home side. The All-Blacks from the Kiwi nation had not lost to the Wallabies since 2011, but Australia provided underdog theatrics, securing an eight-point victory and thus the 2015 Rugby Championship.

Sports and culture mingled once again as I was able to see the renowned Haka dance performed before the game by the All-Blacks. The visitors performed a traditional ancestral war cry and the dance of the Maori people. Along with sporting events, New Zealanders perform the Haka, or ultimate sign of respect, for distinguished guests and outstanding achievements, as well as at funerals. I had the fortunate chance to learn the dance at a Maori village on a trip to New Zealand, and this routine, discovered through rugby, is something that will stick with me for many years to come.

The final Australian sport, Aussie rules football, is a perplexing sport to learn, but once I got the hang of it, it was one of the most energetic, electrifying events that I have seen to date.

In 1857, AFL was founded in the state of Victoria and breeds die-hard fans. Referred to as footy, the game is now nationally recognized and boasts teams also from Queensland, Western and Southern Australia, and New South Wales, among other areas. There are currently 18 teams in the league and because the game is home-grown, it is sometimes called the indigenous game. This is rooted in the belief that the sport is based on native Australian pastimes like possum skin “ball” games.

Hawthorn, a team from Victoria, has won the last three championships, showing a lack of parity in the league, similar to the National Basketball Association or National Football League. It is intriguing to see that there is a correlation in Australian sports, like most places, between a team’s popularity and their success.

The Sydney Swans are very competitive, and there are numerous AFL players at The University of Sydney. It is nice to see such support for a game that Australia can call its own.

AFL has 18 players on the pitch at a time for each team–the most of any sport around the globe. Footy is played on a cricket oval, which is approximately between 148 and 202 yards in length and 120 and 169 yards in width, much larger than any American football field.

Offside is not a rule in AFL, and passes are made either by kicking the ball or making a hand pass with a clenched fist. In order to score six points, one must kick the ball between the two large goal posts, but if it lands slightly to the left or to the right, within the small posts, one point will be awarded. A player can go for goal and kick the ball at any point. Scores are often very high, with averages each match surpassing 50 points per team.

These mysterious sports and their windows into Australian culture have impacted my study abroad experience tremendously. Despite this, I can’t promise you that I’ll be attending any Old Methodist Rugby matches at Wesleyan anytime soon.