“un/do” Provides a Window into the Process of Creation

Using interviews from candidates ranging in age from nine to 70, “un/do” provides a look at cycles of creation and destruction. 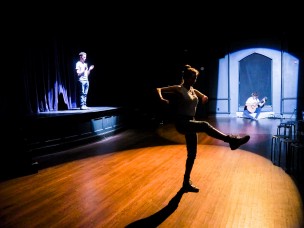 The creative process can be mysterious, confounding and confusing. But “un/do,” running in the Patricelli ’92 Theater from Oct. 1 through Oct. 3, attempts to explore this phenomenon through creative means.

“The idea came about from a discussion last spring break,” said one of the show’s directors, Anthony Dean ’17, in a conversation with Jess Cummings ’17, the show’s other main director.

Dean was inspired in part by his love of striking the sets after productions.

Cummings agreed, emphasizing the importance of demolition in art-making.

“Art is always considered a creative process,” she said. “[But] there is destruction…. You sometimes need to destroy things.”

“Destruction can be creative,” Dean added.

Over summer break, the pair interviewed people between the ages of nine and 70 about creation and destruction. The large age gap was intended to highlight the concept of contrast. The interviewees were asked questions related to the theme and about more specific topics such as how the world will end. After summer break, the directors held auditions. There, actors were instructed to tell a personal story using various means: their words, props, bodies, etc.

“un/do” also underwent an abnormal but clearly effective rehearsal process. The show was put together in roughly two weeks, and rather than write and direct it themselves, Cummings and Dean encouraged the ensemble members to break off and devise their own pieces based on a combination of quotes from the interviews, props, and the actors’ audition stories.

“Most of the rehearsals were just discussions,” Dean said. “‘What do you want to do in this? Do you think it would be cool if we did this?’ It was really collaborative…. Everyone’s voice was heard.”

Cummings added that one piece, the final vignette prominently featuring the use of string, was devised because the cast liked string and wanted to find a way to include it.

That the production is unlike others that audiences have seen works to the benefit of “un/do.”

For starters, the seating setup is immediately distinctive. It’s comprised of 60 stools arranged in two circles, one inner and one outer. Dean explained that this arrangement was chosen so that the theater could be “divided thematically” and so that the audience could see all the action, and, on some level, feel a part of it.

It’s hard to image “un/do” without this set-up. During a tech rehearsal, my attention bounced back and forth from different parts of the theater, at first between someone painting a blank canvas, then to a woman onstage talking about cooking in the spotlight, then to another woman miming cooking. It was a slightly dizzying experience, yet that is exactly the point: it sensationalizes the creative process and emphasizes its inherently baffling nature.

But this setup also allows the audience to feel a part of the creative process. At one point, an ensemble member approached me while I was sitting in my seat, and read to me from an original children’s book about ice cream made of construction paper. At another point, I was instructed to stand up and help with a project that involved a cardboard box; it remains unclear what the project was exactly. I was then handed a piece of cardboard. I stood for a moment or so, and then the cardboard was taken away from me. I was instructed to go back to my seat. The vignette ended with the two cast members who had been working on the project throwing a tantrum and quitting. I quickly associated this with Hollywood directors leaving big-budget films due to “creative differences,” but this vignette clearly was not meant to have a clear definition.

Still, this vignette is a prime example of what “un/do” does so well: It’s an experimental, multi-sensory piece, but unlike many devised pieces or art projects, it doesn’t get bogged down in pure artistic sensation or ambiguity for the sake of ambiguity. Instead it has a clear enough structure to allow its audience room to interpret. This is not a white canvas with a red dot in the center that is supposed to have significance; it is more akin to a Picasso, seemingly nonsensical but deliberately layered and deep.

Of course, something as experimental as “un/do” is likely to not be enjoyed by all. As Dean described, some people will like it, others will be confused, and others will wonder why it was done the way it was. “un/do” seems primed to be an engaging start to the Second Stage season, especially for those looking for art that will challenge and confuse them.