Radio Control Club Goes Above and Beyond with Drones

Grace Wong ’18 and the Radio Control Club showed The Argus how drones expose a different—and beautiful—view of campus. 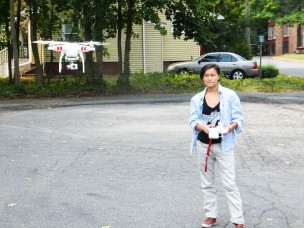 In a parking lot near the Butterfield Colleges, Grace Wong ’18 took out two plastic objects from a large, black case. One was a remote controller, with two joysticks. The other looked like a flattened bowling pin with propellers attached. It was a drone.

Wong, the president of the Wesleyan Radio Control Club, a student group devoted to allowing students to use drones, turned on a power button, and arcade-style music started up. She took out her phone and loaded an app. Then, she pushed one joystick forward on the remote control.

The drone lifted from the ground and hovered in the air, rising above the nearby trees. Wong showed me her phone. It displayed a view of where we were, from the drone’s perspective.

“No one really sees this campus from [above],” she told me later, after having showed me the drone in action. “Like, the Butterfields is actually beautiful—and I’ll show you a picture of that. It’s gorgeous—the geometries of it.”

Wong now hopes that the Radio Control Club can allow other people on campus to have access to the drone’s perspective. Members of the student group, she explained, can borrow the drone and use it for any purposes they may have. They are especially encouraged to shoot film for any organizations they belong to.

Wong inherited the club this year from the group’s founder, David Schwartz ’17. Schwartz is studying abroad for the year at the London School of Economics. He gave the group to Wong to keep it running while he was gone, she said.

“He mentioned that he was starting a drone club and that he was going abroad so he’d need someone to keep it alive,” she said. “And I thought it would be a good way to incorporate real publicity into Wesleyan’s activities on campus.”

Wong hopes that her club will be able to form partnerships with various campus functions. She has been in contact, for instance, with Karen Whalen, the Director of Athletics and Chair of Physical Education at the University. Whalen, she said, is interested in having drones film athletics events. In an email sent to The Argus, Whalen wrote that she did not know about any current plans to film events.

With the exception of the Athletics Department, however, most interest in the club has come from a personal level and is not institutional.

Wong said that she plans to film the events of activist groups on campus. Additionally, some film students have expressed interest in using the drones to film overhead shots for their theses, she said.

What the Radio Control Club does is also, to a large extent, up to its members’ desires. At the first meeting of the club this Monday, one student expressed a desire to use the drone to make music videos.

Another, Rami Hamati ’19, wanted to join the club so he could make and fly his own drones. He had built and flown remote control planes in Jordan, where he lives, for six years prior to enrolling in the University. He joined the club in order to continue his hobby. During the meeting, Wong suggested that he could likely get funding to build a new plane.

“Hopefully I’ll get funding by this club, which the president…was talking about [at the meeting],” he said. “That’s great. That gives me hope.”

According to Wong, Public Safety officers often individually come up to her when she is flying the drone, intrigued by the technology.

“Some of them know their things,” she said. “Some of them are talking about actual parts of the drone. And so I might as well make it a resource for them, right?”

How, exactly, the Radio Control Club will be a resource for Public Safety, however, is unclear. The communication between Wong and Public Safety officers, she explained, has not involved any concrete plans.

“It’s very preliminary right now,” she said. “But we might have the drone do surveys of the blue light emergency lights on campus. We might have it fly around those. Or fly around the RIDE at night.”

But according to Scott Rohde, the Director of Public Safety, those plans will not be implemented for a while.

“At this point Public Safety has no interest in using a drone,” Rohde wrote in an email to The Argus.

Right now, drones are a contentious topic of public debate, especially when in the hands of the military or the police, where issues of privacy often come into play. Neither is personal ownership of drones without controversy. Critics fear, in particular, how frequently they crash. In January, a man was detained, though not charged, after having crashed a drone on the grounds of the White House. Three days later, a Reuters/Ipsos poll found that 42 percent of Americans did not approve of private ownership of drones; only 30 percent approved.

Then, on Sept. 5, a drone crashed into the press box of the University of Kentucky’s Commonwealth Stadium. On Sept. 12, a drone crashed on the ground in Pasadena, California at a public screening of “The Princess Bride”; the ensuing debris injured an 11-month-old girl.

Wong reported that this is a particular fear of hers, especially because it seems impossible to ensure they will not happen.

“It’s really risky,” Wong said. “There’s really no way I can say that this drone will come back safely any time I lend it out.”

Keeping the drone always in sight would improve safety, but Wong said that this is not feasible with the video the club is trying to get.

For now, Wong believes her best bet at preventing crashes is to train each member of the group individually, and to only loan drones to people who have completed training under her supervision. For this reason, and in order to increase the flight time each member receives, Wong is content with a small number of members.

“The more flying time, the more practice, the less stress about the drone being damaged,” she wrote in an email to The Argus.

Despite the fear, despite the contention surrounding the term “drone,” Wong still continues to fly. People, she said, are interested in the technology.

Indeed, each time I saw Wong fly the drone—I saw her twice—at least one person came up to her and commented on the drone. It whirs loudly in the sky. Even above the trees, it’s hard to miss.

“Every time it flies, people have approached it,” she said. “So this [drone] is an attention-grabber.”