The University hosted a panel titled “Refugee or Migrant? The European Crisis in Historical Perspective” on Thurs. Sept. 17. 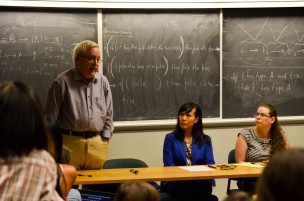 Fullilove chose each of the four professors to speak at the panel for the diverse views from which they approached the topic: Masters is an expert on Syria and the Middle East; Rutland knows much about the emergence of international law to govern refugee populations; Twagira is knowledgeable about African migrants and asylum seekers; Nguyen brings a wealth of experience about Vietnamese migration to the United States with her.

Most of the speakers also have personal ties to the refugee issue and their particular area of expertise. For example, Masters lived in Syria two different times for a total of four years. Masters also has friends in Syria and used to frequently visit the country.

“For me, Syria’s tragedy is personal,” Masters wrote in an email to The Argus. “It is like an old friend dying painfully. The city that I studied as a graduate student, Aleppo, is in ruins and the old city that I loved and wrote about is destroyed.”

Rutland spent time in Hungary where much of this refugee crisis is playing out.

“I’ve been to Hungary many times,” Rutland said. “In fact when I was a student I slept in the [train] station overnight. I know the Keleti very intimately.”

Nguyen’s parents were—and are—refugees of the Vietnam War. Her interest in Southeast Asia and refugees is both personal and academic.

“[My parents] were refugees in 1975, and they are still refugees in a certain sense,” Nguyen said. “Their status as refugee subjects definitely shaped my upbringing and my consciousness.”

According to Fullilove, the topic of this panel is important due to the magnitude of the current crisis and because it is distinctly viewed as only a European crisis.

“I study the United States, which is a country of migrants,” Fullilove wrote in an email to The Argus. “I believe thinking across time and space can help us imagine more effective and humane political interventions—which is why this panel is organized as a part of the ‘History Matters’ series sponsored by the Department of History.”

The panel is also a way to get more students thinking about and interested in history.

“[The History Department] wants to stimulate interest in history and understanding of how history repeats itself or how this enables us to get a better grasp on what’s happening now,” Rutland said. “So the main purpose of this panel is to broaden students’ timeline horizon. There are parallels to be drawn. That’s the main purpose.”

This panel also serves as an outlet for discussion surrounding current events and issues for University students and faculty.

“These events happen so quickly so they are not typically in the curriculum,” Rutland said. “We don’t have time to build courses around things that are happening in the second week of the semester. So these kind of panels are a way of getting faculty and students to talk about current events while they’re happening.”

Attendees said afterward that they thought the panel managed to be both informative and engaging.

“I thought it was very informative, and it was also accessible,” said Julian Layton ’19. “I went in not knowing that much about the refugee crisis, but I was able to follow the conversation, and I feel like I walked away with a much better idea of what was going on.”

Specifically, it prompted many in the audience to think about how they could help with the European refugee issue.

“As we become more aware of what is going on globally, we can get involved through a cohesive effort,” said Amad Amedy ’19. “If anything, we can provide a few necessities for these refugees.”