The University announced that a local energy firm has been selected to expand its microgrid. 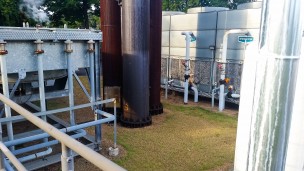 The University recently announced that the local energy firm Greenskies Renewable Energy, LLC, has been selected to expand a pre-existing natural gas microgrid to include a solar array. The 750 kilowatt array is tentatively planned to be located on the southeastern portion of the University’s Long Lane property, adjacent to the rugby field and near the northeastern corner of Long Lane and Wadsworth Street.

This addition is projected to produce around 1.2 million kilowatt hours of power a year for the University, and will link to the rest of the University’s power grid through a central station at Freeman Athletic Center. The cost has not been disclosed, due to concerns of undercutting by competitors in future bids; however, it has been disclosed that Greenskies will operate the array and will sell 100 percent of the produced power to the University at a reduced rate for 20 years, after which the University may either buy the array or the firm will remove it at no cost to the University.

Alan Rubacha, Director of the Physical Plant at the University, commented on the basics of the project.

According to Rubacha, this solar array would most likely be the last addition to the University’s power grid for some time, given the total production numbers of the existing natural gas powered cogeneration systems and the projected production of the array.

“So after that first [2.5 megawatt cogeneration] was installed, our balance was 8,000 megawatt hours,” Rubacha said. “After our second [676 kilowatt cogeneration] was installed, our balance is about 5,000 megawatt hours. Beyond that, this [array] is another 1,200 megawatt hours; there really isn’t much room to put more generation in. Now, generation might change over time, and whatever that looks like we haven’t really determined right now, but as it stands we wouldn’t have any plans to add any more power because we are up against how much we can produce anyway.”

Given the assumption that the array operates at full capacity, Rubacha explained, the University will shut off the 676 kilowatt natural gas engine on sunny days and restart it at night. Moreover, Rubacha discussed the project’s financial terms, clarifying the nature of the agreement between Greenskies and the University in response to claims that the firm would use the land for free.

“I wouldn’t say for free, that wouldn’t be fair,” Rubacha said. “What we’re entering into is a power-purchasing agreement with Greenskies, where all of the factors of the costs of the project are included in an electrical rate that we pay, which includes the sale of RECs [Renewable Energy Certificates], but we will, to [Greenskies], pay a value that includes the capital costs of the project. The agreement can be for 15 or 20 years. So I wouldn’t say they’re using it for free; we’re buying power from them, but we are also accepting a reduced rate because they are able to put their panels on our property. Then, at the end of 20 years, we can either buy them out or they’ll take them away at no cost to Wesleyan.”

Brandon Ho ’18 expressed support for the project, stating that increasing use of renewable energy was a good step for the University to take.

“I think that Wesleyan University’s 20 year agreement with Greenskies indicates that, in the long term, they’re actually thinking about going more green, which I think is a very beneficial step for Wesleyan University,” Ho said. “I think that, in the future, we’re going to see more of green projects like this, and that’s a good thing, obviously, because we get to wean our reliance off of fossil fuel usage or natural gas usage.”

Gary Yohe, Huffington Foundation Professor of Economics and Environmental Studies, also expressed support for the news, but cautioned against thoughtless expansion and spending.

“Expanding to include solar power is a good idea, but with care,” Yohe wrote in an email to The Argus. “Capacity depends on the orientation of buildings, and that cannot change….or cannot be accomplished without serious extra investment with money that might be better spend on really good windows.”