"Key & Peele" may have ended, but it will not be forgotten any time soon. 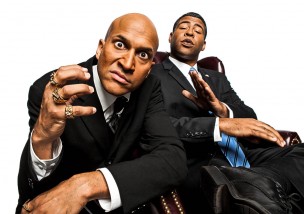 The first episode of the final season of “Key & Peele” begins with a sketch that embraces the style that became the show’s brand over the past four years: wacky, surprisingly idiosyncratic, and jarring. In the bit, a trigger-happy white police officer guns down various unarmed black men, including his own captain who is carrying only a Styrofoam cup of coffee, while letting clearly dangerous white men walk by. While the skit’s conceit doesn’t so much lean into discomfort as shove it out of the way, it truly hits home in its closing moments. The officer, played by Keegan-Michael Key, turns towards the camera with a look of feigned indifference and says, “The last seven came out of nowhere!”

Season Five of “K&P” is par for a course set by one of the most ambitious sketch comedies series directed exclusively by black comics since “The Chappelle Show.” As the show has grown increasingly sociopolitical in recent seasons, it has become more and more comfortable both embodying the political voice of traditionally oppressed minorities and pushing forward the discussions surrounding topics ranging from police brutality to education reform. In the third episode, “A Cappella Club,” two African-American students compete to be the “token black friend” in an exclusively white high school a cappella group. While they pretend to pine for the adoration of their peers, once the other students leave, the two confront each other in what is both a hilarious and troubling exchange. Another bit finds a senator addressing sexting allegations at a press conference, à la Anthony Weiner, only to be literally caught with his pants down, sexting under the podium.

“‘Key & Peele’ are particularly resonant right now because they bring humor to some of the most difficult issues of the day, including political brutality and sexual violence, but they also know that humor cannot be the only response,” wrote Government Professor Sonali Chakravarti in an email. Chakravarti wrote an article on the show for Salon and was recently quoted in a New York Times retrospective on the program. “They want you to laugh, but they also want you to be a little uncomfortable laughing because if you get the joke, you also get the urgency for social change.”

Admittedly, the blueprint that Key and Jordan Peele follow in the preceding sketches is well tread comedic territory, even in the niche the duo has carved out exploring race relations and popular culture (see “ The Chappelle Show’s” “Black White Supremacist” or even “SNL’s” Katt Williams/Nancy Grace parody from last year).

However, while “K&P” is as adept as any of its predecessors at bluntly skewering stereotypes by flipping them upside down, its true inventiveness is often most discernible in its more experimental and strange skits. In this respect, the key to the show’s success is often the delight it finds in the details. No concept is too remote or uncomfortable for the duo to flesh out. Whether the result of “K&P”’s comedic process is successful or not, the process feels effortless and improvised. And, while the ideas can occasionally appear half-baked, you have to give credit to the showrunners for resisting the complacency that comes with repeatedly preaching to the converted. When these more eccentric skits connected, the payoff was sweet.

One bit that has gotten a lot of attention in the past few weeks was the show’s OutKast parody: a hilarious explanation for why the group isn’t together anymore. The rapper Big Boi calmly goes to get a cup of coffee, and faces questions about an OutKast reunion, to which he answers, “People grow apart.” All of a sudden, former bandmate André 3000 prances into the coffee shop, dressed like a leprechaun, and approaches Big Boi with new collaborative ideas: “I’ve got a new idea for an album, man. It’s gonna be just the sound of screeching metal, and then only one spoken word per track.” It’s moments like these that “K&P” is at its most dynamic. Instead of reaching for surface level shock value or simply rehashing old bits, the creative forces behind “K&P” consistently produce material that is both frivolously silly and thought-provoking.

“The recurring sketch about Luther, the anger translator, has become a cultural trope because it speaks to both liberal aspirations for Obama and conservative fears,” Chakravarti writes. “Both groups know that they hold fantasies about Obama that are tied to representations of black masculinity. The humor of ‘Key & Peele’ forces a confrontation with these stereotypes even from viewers who think that they are on the inside.”

One of the most important decisions showrunners must make is when to shut down the machine they have created before it becomes overheated. In this respect, “K&P” echoes “The Chapelle Show” once again by bowing out much sooner then its fans would have liked. To be fair, five seasons and 53 episodes provided expansive territory for even the couple’s most inane musings, particularly the extended road trip Key and Peele employ as their interlude between sketches in the final two seasons.

However, one cannot help but feel that the show’s creative mold has just begun to settle. While iterations of well-received concepts like Obama’s anger translator fueled middle seasons, the program has evolved past these earlier conceits to establish its own unique voice and ethos. “K&P” is a show that refuses to shy away from its own awkwardness and instead uses what could be perceived as corniness to its advantage. It mines the facets of pop culture and politics that often connect with smaller segments of the population, but whose themes resonate more deeply. And, it seeks to break stereotypes by consolidating power in the hands of marginalized groups or placing them in new scenarios, often times with unexpected results.