The Arts Section takes a look at some of the hottest bands on campus. 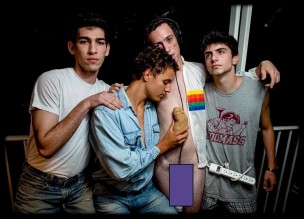 As the school year draws to a close, and the ecstatic realization you’ll be hearing “Birthday Sex” in less than week at Spring Fling sets in, it’s time to recap a strong year for Wesleyan bands and musical acts. Part One of this roundup, covering some of the most significant players in the Wesleyan music scene, features a diverse array of genres and groups ranging from spoken word hip-hop to electronic pop. Part Two, featuring all-caps LADD, Chef, and more is here.

On their sound: “Your favorite poppy-rock band, but: sped up, sloppier, and with songs that have fewer chords.”

Their biggest influences: “Great pop music! Fountains of Wayne, Radiator Hospital, The Beatles: anything that makes us feel some type of way!”

The best Wesleyan show they’ve played: “Battle of The Bands. We only got to play a three-song set because of the nature of the event, but there were so many people and they all wanted to dance around and have fun. We all were grinning so hard in the way that kind of hurts a little bit.”

On their best song: “One of our best songs (our preferences all change daily and we go through cycles of hating and loving the stuff we make), is probably ‘Skinny Legs.’ There’s a part right before the chorus where everyone drops out except a screech from Josh. It feels really cathartic.”

On what unique quality they bring to the Wesleyan music scene: “We don’t think this quality distinguishes us from other musicians on campus but it is the thing that Phatrabbit can be most proud of: honesty. When we are playing, we hope people can tell we really fucking care!”

Where you can hear him: Soundcloud

On his sound: “Words shot through a cannon of broken, yet parallel syntax, and propelled into cloudy, minimalist beatscapes before disintegrating into a terra firm of who-knows-what.”

His best song: “Not counting the 20-plus that I haven’t released yet, ‘Resident Harebrain.’ I’m still trying to figure out how the hell I made the instrumental and what I was on when I wrote the lyrics. Also the video by my homie Ryan Calavano is beyond anything I ever expected to accompany my music.”

On what unique quality he brings to the Wesleyan music scene: “Pseduo-narcissistically. I guess I could say the same thing that makes me stand out back home: my unique approach to language and my ability to make it ring through in performance. I really haven’t heard many cats break syntax, meaning like I do while keeping musically adept percussive cadences of hip-hop’s greatest pioneers. Here, I think people are able to see that there are two sides to my music, its containment in an audio file and the flagrant outbursts of the same songs on stage.”

On their sound: “Mellow indie-pop. We recently have been writing some more upbeat St. Vincent-esque tunes.”

Their biggest influences: “St. Vincent, The National, Radiohead, and my boyfriend Jack Ladd (of all-caps LADD).”

On their best song: “I love our song ‘Little Girls.’ It started with a wacky idea and turned into a really fun collaborative effort.”

On what unique quality they bring to the Wesleyan music scene: “I guess I would say we try to experiment with form in songwriting, but most people do that so I don’t know if that distinguishes us. I guess there aren’t too many female led rock bands at Wes.”

Where you can hear them: Soundcloud

On their sound: “Imagine if a 15-year old Anthony Kiedis went up to the guys in Justice and was like, ‘I wanna make a record.’ They’d be like, ‘No way dude, who are you?’ But, in some universe, they said yes. That’s The Double Twins.”

The best Wesleyan show they’ve played: “Probably opening for my dad’s ’80s-rock cover band at Earth House on Halloween, dressed up as hospital patients. I ended up having a guitar battle at the end of the show. Still hotly debated as to who won.”

On their best song: “The Double Twin’s best song is probably ‘Skinny Black Dress,’ which is a really sad, slow song that I just wrote. I’m still crying. I haven’t released it yet but it’s definitely the Twin’s best.”

On what unique quality they bring to the Wesleyan music scene: “I guess I like that The Double Twins, [or] at least some of our songs, can be played by a DJ for people to grind to as well as a by a band for people to dance to. We also wear a lot of lipstick and coordinate ridiculous dances to our own songs.”

On their sound: “The Thatcher sound is a combination of 90’s alternative, post-punk and emo revival. It’s a lot easier to say that we play a lot of loud guitar rock with feelings behind it though.”

Their biggest influences: “Our influences are really scattered, from bands like My Bloody Valentine, Mission of Burma and Sonic Youth, all the way to doom metal bands like Mastadon.”

The best Wesleyan show they’ve played: “Well, we played a really sick, packed Eclectic show at the beginning of this year. That was unreal. But shoutout to the sweaty guerilla show we played in the WestCo triple at the end of spring semester 2014. That was just as memorable.”

On their best song: “I think our best recorded song, or maybe the one most representative of our sound, is ‘Plastic Mouth.’ It has a bit of everything, the gentle, the screamy, the shoegazey. But, we’re recording a song called ‘20’ right now, and everyone in the band is pumped for that. It deals with heavier stuff than we usually confront in our music.”

On what unique quality they bring to the Wesleyan music scene: “There aren’t a lot of bands playing unabashed hardcore on campus. Whether or not you want to call our stuff ‘hardcore,’ we’re usually trying to play loud, shout a lot, and have fun through angst-extremity.”