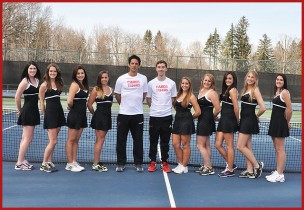 The women’s tennis team raised the bar for future teams and served up a bunch of aces in 2015, going 11-3 overall and 6-3 in the NESCAC. Even with the newfound success and young talent, the team is entering the conference tournament for only the second time in school history, but, unlike in 2008, it won’t be satisfied with a first-round exit.

The task will be tall, as 10th-ranked Bowdoin awaits the 17th-ranked Cardinals in a rematch that could change the face of the women’s tennis program. The Cards lost 2-7 last time, but a couple of the matches could have gone the other way, and with more experience under its belt, the newly-changed lineup will hope to score a different result in round two. The Argus sat down with Head Coach Mike Fried and discussed his thoughts on the season, the team’s postseason chances, and the possibilities of certain players receiving bids to the national tournament.

The Argus: How would you describe the women’s season so far?

A: If you had to choose, what’s been your favorite result of the season thus far?

MF: It’s tough to single it out, but I think going up to Tufts, a team that we hadn’t beaten in I don’t know how many years, on tricky indoor courts—on their home courts—and coming out as well as we did early on to win that match is definitely one of the better ones for sure.

A: The team will be facing off against Bowdoin in the first round of the NESCAC tournament, a squad that defeated you guys out in California earlier in the season. What are your thoughts on the matchup?

MF: They’re a very, very good team that is in the Top 10, and they are playing even a little bit better than that right now. We’re going to have to play our best match of the year for it to be competitive, but if we’re able to do that, it will be competitive. It’s a great opportunity for us, one that the program has never had, and hopefully we’ll go into it with the mindset of nothing to lose and a lot of upside.

A: Do you plan on going with the expected lineup or maybe throwing a curve ball and changing things up with the doubles pairings?

MF: We’re going to make a move that is something we haven’t done the whole season. We are going to split up our one doubles team of Eudice [Chong ’18] and Helen [Klass-Warch ’18], and attempt to show a little bit of a different look at the one and three doubles. We’re going to play Eudice and Aashi [Budhiraja ’18] at one and Helen with Dasha [Dubinsky ’18] at three. We need to recognize that if we’re going to win and have the best chance to win this match, we’re going to have to be very successful in doubles.

A: What do you try to do as a coach to help your young players at this time of the year?

MF: I think at this time of the year it’s important to make sure that they stay loose and to help them the best that we can to manage crunch time, especially with finals around the corner. At the same time, the excitement and pressure is there, and that will come along with postseason play.

A: What’s been the biggest positive surprise of the season?

MF: I think it’s really off-court. I don’t know if it’s really a huge surprise, but one of the biggest positives of the season is how quickly and thoroughly we’ve bonded as a team. I love the way that our team feels, and that’s completely separate from what we’re doing on the tennis court.

A: What are your thoughts on the team’s spring break trip to California?

MF: The California trip was a big success, and in terms of the bonding aspect of this experience was great, but I think that now as we are establishing ourselves in the mix of top national teams, we are going to have to play some top out-of-region teams, and Southern California on our spring break is the best time and place to do it.

A: What’s the current outlook in terms of qualifications for the NCAA tournament?

MF: Eudice [Chong] will qualify for the NCAAs in the singles tournament and will be playing with the best players in the country. But she will have a chance, and then some, to play really well. We’re very much hoping, we’ll find out next Wednesday night with the official entries, but we’re keeping our fingers crossed that Eudice [Chong] and Helen [Klass-Warch] as a doubles team will also get in, and if they do, they’re capable of doing some real damage there too.

A: When the season is over, how do you think you’ll be looking back on it?

MF: It’s so hectic now and none of it sinks in yet. We haven’t played perfect tennis yet, and we have so much to work on and room for growth, but our ability to come together and pull out close matches, is going to sit very well in memory. Not to harp on it, but the way we supported each other and came together as a team we’ll certainly be a real pleasant thing to look back on after the season.