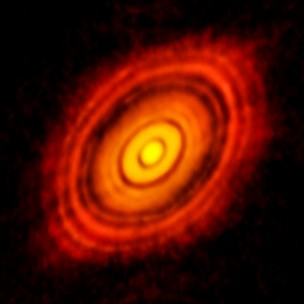 Orion just got a lot closer. With access to a new radio telescope known as ALMA, which stands for “Atacama Large Millimeter Array,” Assistant Professor of Astronomy Meredith Hughes and her students bring faraway constellations into focus and shed new light on how gas and dust left over from stars—known as protoplanetary disks–create planets. Protoplanetary disks give off irradiation that is detected by ALMA, producing images that show scientists where and how planets form around stars.

“Data from ALMA is showing us these disks in a way that we’ve never seen before,” said Hughes, who joined the University’s faculty in 2013. “ALMA is rewriting the textbooks on how planets form around these young stars.”

In just two years, Hughes and her students have learned about the environmental conditions that lead to planet formation and how long they take to form.

Take the image of the HL Tau, a star in the Taurus constellation, for instance. The image, considered the poster child of ALMA, is so crisp that gaps in the HL Tau’s protoplanetary disk have revealed planet formation around this very young star.

“Why are we just starting to look at Orion now? Because of ALMA,” Factor said. “Previously we’ve really only be able to see disks that are much closer using smaller telescopes, and now that ALMA is coming online we can reach out to these fainter, much smaller disks and still be able to see them in the same resolution as the closer disks.”

Factor’s data also provided new information about the star itself, including its mass and temperature. These findings promise to improve astronomers’ understanding of young stars, many of which were in the past too far away to study.

Another BA/MA student in the Hughes lab, Jesse Lieman-Sifry ’15, used ALMA to discover a planet orbiting a 40 million year old star. While old stars usually lose the gas and dust that orbits them in a protoplanetary disk, the star system 49 Ceti still has a large number of particles that can be detected by ALMA.

Collisions between objects in space grind down rocky bodies into trillions of tiny particles that can be detected more easily than a hidden planet in their midst: the greater surface area of the gas and dust gives off more irradiation than would a single large object like a planet. This phenomenon is similar to snow appearing bright white because of the combined reflections of each snowflake, while a block of ice appears clear. The accumulation of these tiny particles can reveal the presence of a planet.

“The reason we look at the dust is because these larger bodies have an influence on the dust distribution,” Lieman-Silfy said. “What we find for 49 Ceti is that there’s probably a planet in the inner disk somewhere that is responsible for promoting destructive collisions.”

The clarity of the images from ALMA and the resulting new discoveries about planet formation only lead to more questions for Hughes, who vows to never stop asking.

As ALMA begins to provide answers about our universe, more questions arise.

“You think that people know stuff,” Hughes said. “You think that if you ask a question somebody’s going to have an answer, but working in science, we are working with the questions that nobody has an answer to. It’s daunting and exciting to realize how much open space there is for discovery.”