Vines on Church, a new bar and restaurant on Church Street, serves patrons a cocktail of visual art, music, solidarity, and safe fun. 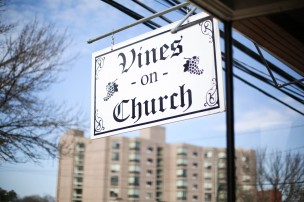 If Wednesday bar nights have fallen by the wayside for you ever since The Cardinal’s Nest closed last summer, prepare to pull yourself out of your hump-day slump. Saturday marked the opening of Vines on Church, a new bar and restaurant at 129 Church Street, the former Nest location.

Neil Baloga, the owner and co-manager of Vines on Church, purchased the property three months ago and spent the past two and a half months renovating the bar with his staff.

Baloga’s work certainly shows. The restaurant, sharply decorated in a red-and-black color scheme (“school colors,” Baloga explained), bears almost no resemblance to The Nest, save for the outdoor patio, which remains intact and which, as the restaurant’s name suggests, bears grape vines. Behind the bar, whose surface is covered in 14 thousand pennies, nine of them tails-up, are sets of floating shelves made of music encyclopedias from the 1930s.

Baloga curated the bar’s aesthetic carefully to attract a customer base of young, artistic people, including Wesleyan students.

“We’re much younger and a little bit closer to the pulse of what’s relevant, I’d say,” Baloga said. “This is built for college. We’re fresh out of college ourselves, so we know what we want. We know what we would have wanted when we went to college. We built that for these generations.”

The bar also showcases original works from local Middletown artists, including a pop-art portrait of Conan O’Brien with a Ziggy Stardust stripe across his face and a glittering one of Bill Murray.

“They’re all for sale except for Bill Murray,” Baloga said. “He’s mine.”

Vines on Church will feature live music from local bands and DJs, and Baloga encourages students to submit their work to be performed. But despite Vines on Church’s emphasis on student culture, Baloga stressed the importance of maintaining an all-inclusive and safe atmosphere.

“[We are] breeding a safe, fun environment for students and the general public, focusing on community and countercultural arts,” Baloga said.

Baloga cited Vines on Church’s close-to-campus location as one major contributor to its atmosphere of safety. The bar will also maintain a strict 21-and-over policy (though it is still awaiting its liquor license). That said, students under drinking age will be included in the festivities. Baloga is considering instituting alcohol-free nights at the bar for people aged 18-20.

“The younger people can come eat and hang out and have cool juice drinks and alternative entertainment as well,” Baloga said.

For all the bar’s emphasis on arts and entertainment, one of Baloga’s main reasons for founding Vines on Church was to serve quality food. He spends much of his time in the kitchen with chef Mike Krawitz, stretching pizza dough and preparing dishes. Though he is not a formally trained chef, Baloga has long been passionate about cooking.

“The school of hard knocks,” he said. “That’s what my culinary school is.”

Mainly, Baloga hopes to foster a tight-knit community at Vines on Church, an appropriate goal considering the close relationships among the staff: Baloga’s co-manager is his wife, Erica Baloga, Joe Scruillo, Baloga’s cousin, functions as his “right-hand man,” and Baloga has known Krawitz and floor manager Jared Clarke for many years.

Baloga stressed that no staff member is tied to any given role, and that members frequently help one another with tasks outside their assigned realms. Scruillo agreed that cooperation, along with Baloga’s strong ambition, was pivotal in founding Vines on Church.

“Teamwork makes the dream work,” Scruillo said. “I wouldn’t have ever imagined this would have happened. Two months ago, it wasn’t, and now it is. It’s really awesome to work with people like Neil who like to get it done quick.”

Baloga said the process of opening the restaurant was far easier than he thought it would be, especially when he kept his long-term goals in mind.

“[I’m inspired] when I think about being able to open a restaurant and enjoy it with myself and my family, and parking my Harley right out on the road in front of the business,” Baloga said. “Food and community.”