Thursday, April 2 has been announced the annual day of recognition and fundraising in honor of Foss Hill. 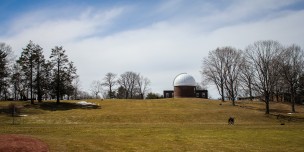 Last week, the Office of University Relations announced the establishment of an annual day of recognition and fundraising in honor of Foss Hill. Thursday, April 2 marked the inaugural day. and sudents, professors, and alumni were invited to share their experiences and memories of this central landmark on the University campus.

“As a student I spent many days hanging out on Foss Hill listening to music and just hanging out,” Fedolfi wrote in an email to The Argus. “I also remember watching my sister graduate from Foss Hill because it afforded a better view than the seats. Since I started in University Relations a couple of years ago, I’ve reflected on my own reengagement with Wesleyan. We were looking for a way to get the attention of our busy alumni to help remind them of their time here, something that is unique to us, something that only has meaning to the relative few of us in the world. Foss Hill was it.”

Barbara-Jan Wilson, Vice President for University Relations, affirmed Fedolfi’s sentiments about Foss Hill, sharing some of her own memories.

“I have had the privilege to work at Wesleyan for almost 33 years,” Wilson wrote in an email to The Argus. “Foss Hill is central to those memories: watching the men’s baseball team play and go to the College World Series, tailgating for some great Little Football victories, sledding and skiing with my kids on snow days (I lived on Mount Vernon Street for 9 years) and greeting alumni as they return for Reunion/Commencement weekends.”

The universal appreciation for Foss Hill among members of the Wesleyan community is what made it the subject of the new campaign, according to Fedolfi.

“Wesleyan students have many varied and rich experiences on campus, but everyone shares the experience of enjoying Foss Hill,” Fedolfi wrote. “The view, the sledding, the sunshine on a warm day—these are moments students carry into their lives after Wesleyan. Foss Hill Day is meant to help all members of the Wesleyan community feel connected, wherever they are.”

According to statistics provided by President Michael Roth at the March 1 WSA meeting, the University had only raised 85 percent of the funds it had intended with the end of the “THIS IS WHY” campaign approaching. Moreover, the University is currently paying off a $200 million debt that was taken out on an unspecified date in the past. While the University pays $10 million every year, rates are set to increase by 2023, providing a strong impetus for the University to not only restructure the debt, but also pursue more proactive fundraising.

“All the money we raise on April 2 will help Wesleyan students,” Wilson wrote. “Financial aid is the single most important priority in our $400 million…campaign. Every gift helps.”

This is where the metaphor of Foss Hill meets the goals of the administration, Fedolfi said, citing the ubiquity among Wesleyan students and alumni as a lynchpin that would, hopefully, remind alumni of the importance of financial aid to many students.

“Foss Hill Day is meant to remind us of our common ground and, particularly for alumni, our common purpose of supporting Wesleyan students,” Fedolfi wrote. “Both my sister and I received financial aid, and helping students afford Wesleyan is very important to me and all of us at Wesleyan. So, we are asking people to support students on Foss Hill Day and that includes a challenge gift from Tom Kelly ’73…. We’re hoping…we’ll attract 1,000 donors as a follow-up to our Giving Tuesday effort (Dec. 2, 2014) of more than 2,300 donors in one day. On Giving Tuesday we raised more than $500,000 for the Wesleyan Fund.”

However, while Foss Hill Day is primarily a fundraising event, Fedolfi hopes that it will go beyond one-time donations and bring all members of the Wesleyan community together, much as the hill itself is a unifying landmark.

“But beyond financial support, a healthy and engage[d] alumni network is important to students,” Fedolfi wrote. “Alumni provide students with advice and opportunities, and the more of them who feel connected, the more they can help. We plan to make Foss Hill Day a recurring event, though not necessarily always on April 2.”

While Fedolfi, Wilson, and the administration at large are excited about the day of appreciation, student reaction was mixed. Foss Hill, it seems, may not be so ubiquitous.

To some, the day seemed pointless.

“Why?” asked Emery Frick ’17. “I mean, [Foss Hill] sure is there. Students won’t donate any money, and parents will just say ‘who cares?’ Alumni might, I guess. Not that many people hang out on Foss; it’s just like the same people repeatedly. I don’t know. Good try, Wesleyan.”

Others, however, agreed with Fedolfi’s sentiments on the hill.

“Foss Hill is an icon,” Michael Sheldon ’17 said. “It is a symbol of school-wide unity.”