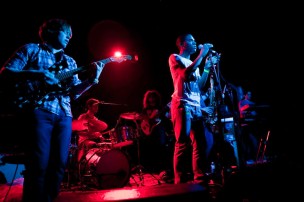 It was as if they had never left.

When The Rooks—an indie soul/R&B collective that formed at Wesleyan two years ago—returned for another post-graduation show on campus on Saturday, anticipation was high as it has ever been. With a line that stretched far outside the confines of Alpha Delt, excitement over The Rook’s reappearance was bolstered by an electric opening set from a current hip-hop/R&B influenced Wesleyan band, the Isaac Butler Brown ’17-fronted Chef.

Despite a limited online presence, Chef’s singles (including their hip-hop infused cut “Fuckin’ Up The Atmosphere”) have gained a cult-like following through word of mouth. This, combined with a series of superb live performances—such as their X-House show last semester—suggested that they would be the perfect opener.

“The vibes were revolutionary,” said Carter Deane ’18. “People need to know where I stand on Chef. Alpha Delt hosted a great show that met all of the mythical expectations of the first Saturday back from break.”

Because Chef boasts the most eclectic array of musicians of any Wesleyan band—including female vocalists Annie Flom ’17, Mimi Goldstein ’17, and Lydia Elmer ’17, and saxophonists Willie Molski ’17 and Max Luton ’17—their maximalist style was an ideal way to set the stage for The Rooks.

Despite calls for an encore, Chef ushered The Rooks up to the stage, and when lead singer Garth Taylor ’12 took the mic he had only high praise to offer.

“Wesleyan, it feels so good to be home!” Taylor said. “We leave for only two years and we thought we wouldn’t see anyone better than us. But we were wrong. Give it up for Chef.”

Taylor opened the set by launching into a technically impressive cover of Frank Ocean’s “Bad Religion.” “Religion” was an interesting choice for a singer who draws parallels to the aesthetic and vocal style of Ocean, despite being devoid of Ocean’s coolly introverted persona. He infused an ecstatic energy into his covers of “Religion” and D’Angelo’s “Untitled (How Does It Feel)” that was previously absent from the comparatively restrained originals. Dancing on stage completely uninhabited, Taylor completely ignored the fourth wall and fed off his interactions with the packed crowd.

While The Rooks have begun a small tour on the college circuit in promotion of their soon-to-be released second EP, Taylor remarked on the unique energy of the band’s homecoming show.

“There’s a certain level of nostalgia in it for us, remembering those first shows we put together in the fall of 2011 and having our friends rock with us,” Taylor said. “But it’s another thing entirely to see a new crop of Wes family sing, shout and dance as hard as physically possible. We saw two crowd surf moments last weekend—two. We’ve been fortunate to be well-received on other college campuses, but Wesleyan shows are far and away the most energetic shows.”

As The Rooks began to grow comfortable, visibly bolstered by the warm reception they received, they transitioned from covers into their new material, including several unreleased songs off their second EP and the singles “Intermission (Wires)” and “Secrets.”

“Secrets” showcases Taylor’s stripped down R&B sound, evoking both R. Kelly and Stevie Wonder. While Richman and Russo were content with remaining in the background, their chemistry provided Taylor with an attractive landscape to improvise on many of The Rook’s more tranquil numbers.

“While at Wes we definitely feel that extra boost of energy from the crowd, since we’ve been off campus we’ve tried to come together and create a certain level of energy between the six of us on stage,” Taylor said. “Even though we weren’t familiar with every face at the show—hi, new friends!—we definitely felt comfortable taking risks with the set, and solos, and experimenting with little moments here and there.”

Hattendorf is another talented performer who, while operating in the background for most of the show, provided singular instrumental and vocal support. His ability to play a multitude of instruments and experiment with several different sounds, including several jazzy saxophone solos, creates a sound fuller than most six-person bands could produce.

As The Rooks segued from their newer material to several more up-tempo older tracks off their first EP, Something You Can Take, the short breather enjoyed by the audience—during which where Taylor told everybody to “find somebody to grind with”—quickly ended. The frenzied dance party resumed, and, in a nod to their opening act, Taylor began to duet with Chef’s female vocalists who were dancing in the first row on a boisterous cover of Stevie Wonder’s “Signed, Sealed, Delivered, I’m Yours.”

“Chef was phenomenal, slick and powerful, and they’re just getting started,” Taylor said, trumpeting the opener. “The music scene at Wesleyan is always churning out great and interesting talent and we were so glad we could play alongside Chef and see them do their thing.”

Serving as a key example of what motivates Wesleyan’s impressive array of bands, when The Rooks finally concluded a near 90-minute set the invigorated crowd demanded that they return to the stage with a deafening cheer of “Encore!” When Taylor sauntered back up to the mic and surveyed the crowd, he could only say three words before launching into the band’s encore: “Thank you, Wesleyan.”