This week's science column probes into Professor of E&ES Jim Greenwood's evidence for water on the moon. 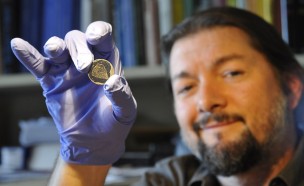 Are you a Martian? In Assistant Professor of Earth & Environmental Science James Greenwood’s class, “Mars, Moon, and Earth,” students test their hair for hydrogen isotopes to determine where in the solar system they come from. As it turns out, no one in the class is from Mars.

“But we haven’t checked all of the professors here, so got to watch out,” Greenwood said.

Origin is an important concept for Greenwood, who welcomed the addition of a German mass spectrometer in his new lab by outfitting it with the scarf of its hometown’s Bundesliga soccer team. In 2011, Greenwood made a groundbreaking and controversial discovery of large amounts of water in rocks from the moon. Now, he’s focusing on figuring out how much water is on the moon, and, using the same technique he used to determine that his students are terrestrial, where in the universe lunar water comes from.

NASA’s Apollo 11 mission, the moon landing that broadcasted commander Neil Armstrong taking man’s first steps on the moon, is somewhat less famous for collecting the first lunar rocks. Since the early 1970s, scientists have been searching geological samples brought down from the moon for signs of water.

“First they wanted to look for life in the lunar samples,” Greenwood said. “They quickly found no life. And then they started moving on to water because water is important to life, and they weren’t able to find any water either.”

Greenwood studies lunar samples of apatite, the main phosphorous-containing mineral on earth and important bio-mineral that is found in teeth and bones. In apatite, which means “deceit” in Greek, Greenwood found levels of hydrous materials that had never been seen before.

“Our group was the first to measure lots of water,” Greenwood said. “That [discovery] really changed the paradigm to, ‘Wow, the moon has water.’ Before that, it was, ‘Does the moon have water?’ Now, the question is how wet [is the moon]?”

Greenwood’s finding of earth-like quantities of water on the moon challenged the core of our understanding of the moon and baffled scientists. Everything we thought we knew about the moon suggested it was rather dry. For example, certain rocks that hold a lot of water and are abundant on the earth simply aren’t found on the moon.

Greenwood’s discovery even challenged the moon’s origin. In the widely accepted “giant impact hypothesis,” a Mars-sized body is thought to have collided with Earth, blasting off debris that coalesced into the moon. However, in this model, the moon is dry; all of the lunar water would have been vaporized by the collision.

Living up to its name, it seems that apatite had been deceitful. Using a mathematical simulation, Greenwood found that it can appear to have a lot of water under what are actually very dry conditions, and this might be what he was seeing in his lunar samples. He gladly scaled back his estimates of the amount of water on the moon.

“[The samples] did not have earth-like amounts of water.; they had less…which is good because it was really bothering…us that the moon would have more water than the earth,” Greenwood said.

A smaller amount of water on the moon makes sense, but exactly how much there is and how it got there are subjects for debate among scientists.

Greenwood searches for the source of lunar water in rocks by measuring their ratio of deuterium, a heavy isotope of hydrogen with a neutron in its nucleus, to regular hydrogen. All of the hydrogen and deuterium in the universe was created in the big bang. These isotopes were then distributed, and each planet, star, and meteorite gained different amounts of the two isotopes. Therefore, each object has a unique ratio, or signal. Just like your unique scent tells your dog what he is sniffing, the ratio of deuterium to hydrogen tells scientists like Greenwood the identity of a certain sample of water. The signal of water on the moon is different from water on Earth.

“It turns out that the lunar water is unique,” she said. “The only thing that looks anything like it in the solar system are comets, and so we suggested that the water was brought to the moon from comets.”

Comets may have delivered water to the moon right after the giant collision or more recently (in the last few millions of years), and this water may become a natural resource for humans in the future. Because of the rotational axis of the moon, large craters at its south pole have never been exposed to sunlight. When rocks like apatite were heated on the ancient moon by volcanic activity, water vapor may have formed ice in these craters that is still there today. Future space missions may therefore utilize lunar ice as a water source for building a refueling station on the moon.

“There’s some sources of ice on the moon and we don’t know how much of these come from the magmas versus comets, actually, so that’s something that would be nice to figure out in the future,” Greenwood said.

This summer, Greenwood and his students will test lunar rocks in their new lab to trace the origin of the water held within them, a mystery that is clearly out of this world.