“LGBTQQFAGPBDSM,” known within Wesleyan's queer community as the "endless acronym," became the source of online scrutiny following DKE's lawsuit against the University. 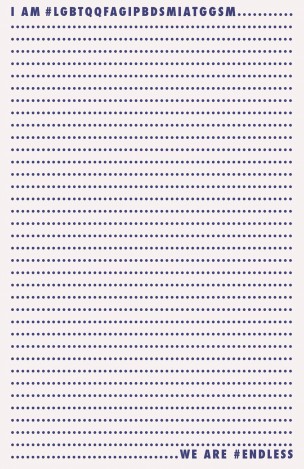 In all of the 10 years it’s existed online, the 15-letter acronym hadn’t raised so much as an eyebrow outside of the University. By the end of February, however, a lawsuit went public that turned “LGBTTQQFAGPBDSM” into an online controversy that surprised, more than anyone, the community that invented it.

On Feb. 19, 2015, members and alumni of Delta Kappa Epsilon (DKE) fraternity filed suit against the University for sexual discrimination and deceptive practices, among other charges. An all-male residential fraternity, DKE’s 276 High Street residence is subject to the University’s recent coeducation mandate, which fraternity members claim singles them out from other students in housing choice.

“We sincerely hope that the Court will reject the blatant hypocrisy driving the actions of Wesleyan’s administration and see that justice is done by restoring the rights of DKE undergraduates to live in their own house,” reads a statement released by DKE International. “Such an outcome would be a victory not only for DKE Wesleyan, but for every Fraternity who cherishes the bonds of brotherhood that we are so fortunate to call our own.”

Wesleyan’s hypocrisy, DKE alleges, arises from its offering of myriad other options for University-sponsored program housing based on gender, race, creed, or sexual preference. DKE’s lawsuit lists a number of residences it says allow such associations, including Women of Color House, Womanist House, Malcolm X House, and Open House.

Within Wesleyan’s queer community, “LGBTTQQFAGPBDSM” is cheekily known as the “endless acronym” (which is also the name of the community Listserv). It’s not so much a single identity as a list of identities, a shorthand for the groups of people whom the house seeks to include and welcome. Over the 23 years Open House has existed, that acronym has expanded drastically, and even today, it’s incomplete.

But on the Internet, the very existence of the acronym itself was treated as news-worthy and worthy of scorn. “Wesleyan University creates all-inclusive acronym: ‘LBTTQQFAGPBDSM [sic],’” wrote The Week. “No, it’s not a drunk text.” The Christian Post ran the headline, “LGBTTQQFAGPBDSM? Housing for 15 Alternative Sexualities Is OK, but Men-Only Fraternities Are Not, Wesleyan University Says.”

Even The Washington Post, reporting more generally on the arguments of the lawsuit, drew attention to the house by refraining from writing “genderfuck,” claiming, “We can’t print this one!” That the acronym spelled out “FAG” in the middle did not escape scrutiny, either.

A recurring theme of the more negative articles was surprise that the more widely known “LGBT” or “LGBTQ” acronyms were not “inclusive enough.” Despite the tone, there is some truth in this sentiment. “LGBTTQQFAGPBDSM”—sometimes appearing instead as “GLBTQQFAGPBDSM”—is a conscious effort, as Open House’s description states, to appreciate “the variety and vivacity of gender, sex and sexuality.”

Simply due to its length, “LGBTTQQFAGPBDSM” is not intended as an acronym for everyday use, according to Open House resident Nola Werlinich ’17. She settled with “LGBTQ…xyz” in conversation. The Argus, in a 2004 article on the queer community considering adopting “queer” as its umbrella term, referred to the acronym as “GLBTQetc.”

According to Associate Professor of American Studies and Anthropology and Open House faculty advisor Margot Weiss, adding “extra” letters to the conventional acronyms is a way of better carrying out this mission. This expansion is a thread throughout queer history.

“This is not atypical, because of the limitations of particular identity markers,” Weiss said. “In many places, what started as a Gay Student Center or Gay Studies, because of a lot of agitation by women, became ‘Gay and Lesbian,’ because of the people left out of that became ‘Lesbian, Gay, Bi[sexual], Transgender.’ And the trans* was always the ‘fake-T,’ as Dean Spade put it, never really part of that.”

According to Weiss, terms such as “genderfuck” or “flexual”—the latter, she said, she’s never heard outside of Wesleyan—arise to describe something that people feel is not described elsewhere.

“These things may arise in particular communities to describe something that a bunch of people are feeling, something that seems relevant, but then kind of fades,” Weiss said.

Both “genderfuck” and “flexual” have similarities to terms such as “heteroflexual,” “pansexual,” and “genderqueer.” They are identities that queer (here used as a verb, “to queer,” in the sense of questioning and challenging assumptions) gender and sexuality, challenging the strict binaries that have long been assigned to people.

“It’s a linguistic paradigm and paradox because it’s hard to identify if you don’t have the language to explain how you identify, but as soon as you have that language, it creates a box in which you are trapped,” Werlinich said.

At the University, at least, the word “queer” appears more often than not, used everywhere from the QueerWes student group and the Queer Resource Center to the Queer Studies course cluster. But, as Werlinich acknowledges, the word “queer” brings with it a long history of pejorative connotations and thus significant cultural baggage; as a result, some members of the so-called queer community don’t like the term.

“LGBTTQQFAGPBDSM” is how Open House works around this dilemma, refusing to restrict residents or applicants to pre-determined labels and encouraging the proliferation of new, more representative identities.

“They did call themselves Open House, open to all these forms of difference from normativity,” Weiss said. “And in that way it’s not an identity house. It’s about oppositionality to hetero-gendered, heteronormative modes.”

Like most program houses, Open House was formed by students in response to a perceived need on campus. In the early ’90s, several new queer institutions arose at Wesleyan, including QUICHE (Queers United In Crushing Homophobia Everywhere) and the support space Step One, which operated underneath the Gay, Lesbian, and Bisexual Alliance (GLBA)—a student group formed in the mid-70s as the Gay Alliance and later re-named to the Queer Alliance.

According to Wesleyan University’s webpage “Daring To Experiment: Wesleyan’s Queer History 1975-2000,” three first-year students in 1991 proposed a new program house to “provide a supportive environment for queer and queer-positive students.” Originally at 69 High Street, “Our House” housed 11 residents, before changing to “Open House” and moving locations to its current, smaller 154 High Street residence.

This semester, Open House is home to seven students. And yet, the endless acrimony over the “endless acronym” shows that efforts at inclusiveness are still politically polarized.

“There are people who would like to straighten things up and make them a little less controversial,” Weiss said.

To Weiss in particular, these efforts turned forceful. The Wednesday after the DKE lawsuit story broke, Weiss received an email from someone claiming to be a potential Wesleyan student, saying that the “LGBTTQQFAGPBDSM” description was not appropriate for a university.

“I find these words to be deeply offensive and will contact the authorities should it not be taken down,” the email reads, threatening Weiss with arrest.

Weiss ignored the email, but the following day, the same person sent a follow-up email with escalating threats.

“I see you do not take my concerns seriously,” the second email reads. “I have no choice but the call the authorities and issue a warrant out for your arrest; I also plan to file suit against you for civil damages. May you learn from your choices next time.”

In a case of history repeating itself, in September of 1991, the queer history webpage recalls an incident at a fraternity event in which queer students were harassed by partygoers, after which relationships between the queer community and all fraternities deteriorated for a few years. Later in the decade, Beta Theta Pi and Psi Upsilon began admitting openly gay students, but according to the webpage, “relations with with DKE… would remain unfriendly.”

Weiss assumes the person found her email through the Office of Residential Life’s program house page, where she is listed as faculty advisor. Ben Romero ’16, the House Manager, did not respond for comment, but according to Werlinich, no Open House resident had personally received any email or threat. Weiss checked with Assistant Professor of English Amy Tang, faculty advisor for Women of Color House—also mentioned in the lawsuit—but said Tang did not receive anything. In an email to The Argus, Rev. Tracy Mehr-Muska, faculty advisor of Womanist House, wrote that while she did not receive any threats, she was upset over the negative press about Open House.

“I am grieved by the harassment and persecution of the GLBTQ community that persists nationally and locally, even as many states and faith communities (including my own Christian denomination, thankfully) continue to move in the direction of justice and equality,” Mehr-Muska wrote.

By the end of March, most of the press over Open House has died down. Weiss did not report receiving any more threats, from the same email address or any other.

“And I haven’t been arrested yet,” Weiss joked.

The same Wednesday Weiss received the email, the residents of Open House gathered in their living room for a house meeting to share their feelings and concerns with the press coverage. They planned a queer community meeting for Sunday, March 1 to discuss it and the acronym further, as well as plan new projects.

According to Queer Community Intern Aidan Bardos ’17 in an email to The Argus, the meeting addressed the feeling that queer life in general at Wesleyan had not been as active the past few years. The attendees decided to start up a weekly Queer Support Group, bring back its Queer Alumni Mentorship program to link up queer students and alumni, and create a new Queer Sibs program that would pair queer juniors and seniors with queer first-year students.

In conversation with members of the queer community, Open House is also looking to revise their stated house mission.

“What we need is an Open House description that emphasizes the spectrum of (a)gender and (a)sexualities that one can identify as, while also recognizing that gender and sexuality are, for some, fluid,” Bardos wrote.

According to Senior and Program Housing Area Coordinator Daniel LaBonte, Open House, Residential Life, and Student Affairs are currently discussing adding letters to the “endless acronym” to open it up even further. While Bardos felt that focusing on the acronym was not the best path to improving the community’s inclusiveness, Werlinich suggested that “GSM,” which stands for “Gender & Sexual Minorities” and is increasingly used as an un-controversial umbrella replacement for “queer,” might be worth including.

Whether or not the backlash over the “endless acronym” will lead to an even longer acronym, the existing acronym has already resulted in a reinvigorated queer community.