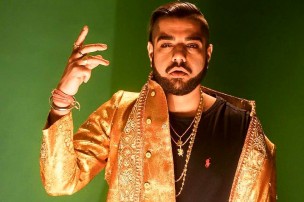 It has been a tumultuous few months for hip-hop music. While the quality of hip-hop releases in 2015 has already exceeded 2014’s decidedly mediocre output, rap in 2015 is anything but jovial; it’s pissed off, and rightfully so.

Amidst surprise releases from some of the industry’s most notable figures, including Kendrick Lamar and Earl Sweatshirt, Himanshu Suri ’07, better known as the rapper Heems, has carved out a distinct space in rap music with his politically charged first solo album, Eat, Pray, Thug. Thug is equal parts incendiary and deliberate, and a confident departure from the sardonic and comical work of Das Racist, the critically acclaimed rap group Heems formed with Victor Vazquez ’07 (Kool A.D.) while at Wesleyan. Taking on the alienation of an Indian-American who watched the Twin Towers fall several blocks from his high school, Thug is a bold statement in a post-9/11, post-Ferguson world.

The Argus met up with Heems to discuss his new record, all things hip-hop, and his Wesleyan experience.

On The Current State of Hip-Hop

HS:I didn’t really realize we were all about to drop albums at the same time. The nature of release dates is that people are more reluctant to put out a release date because they don’t know if they’re going to make it.

So, all of these albums just dropped around this time. I was tweeting today just about making rap on a label, whether it’s a major or indie label, and what that means in 2015. Putting out a rap album is no easy feat. Earl [Sweatshirt] was on NPR and he was talking about how he was upset at the way his label rolled out his video. With Kendrick, they just rushed it out and he was in some way upset with the way it was released. On a creative level, it has been a great month for hip-hop month. But on a capitalist level, it has been an exploitative month of hip-hop.

The Argus: How do albums that are backed by these supposedly competent major labels get accidentally released like that?

HS: When there are a lot of different people involved in something that doesn’t require many people, things can tend to go wrong. I’m not sure exactly how that works out at a major label. I love being included in the conversation of Kendrick and Action and Earl, but at the same time, my album cost $10,000 to make. It’s not really the same type of situation.

On the Politics of Eat, Pray, Thug

A: You had a recent exchange on Twitter with Pitchfork writer Jayson Greene, who was somewhat critical of Eat, Pray, Thug. You told him, “the record isn’t made for you so all good.” Who is Eat, Pray, Thug made for?

HS: I think it speaks to a lot of people. If that guy didn’t get it then that means it obviously wasn’t for him. For one, there’s definitely a community element for South-Asian, Middle-Eastern and Hindu listeners.

There’s also the fans who identified with Das Racist and might just be hip-hop fans regardless of what their background is. Or people who just like good music. Again, it also speaks to New Yorkers, it speaks to people who were there during 9/11. It speaks to people with mental health issues and people in recovery. I hope it appeals to as many people as possible. But if that dude wanted to write a whole article about how my record wasn’t Das Racist, that’s on him not me.

A: On that note, how much have events like Ferguson driven the tone of your music? Do you ever see yourself getting back to that Das Racist place, where you were more playfully joking about culture?

A: An interesting development in your life has been your desk job at a startup advertising agency. How have you balanced a desk job by day and a career as a rapper by night?

HS: With some difficulty. I was doing that for a couple of months and then recently I put it off to handle the music and touring because things are picking up with the album. It was interesting for me to just be in the world of advertising and startups. I still know a lot of people who work in that kind of world and keep in touch with them. I did that for a couple months for grounding and structure but right now I’m very busy with the album.

A: Was that the first real desk job you’ve ever had?

HS: No. I was a headhunter on Wall Street for two years hiring executives for Goldman Sachs before Das Racist.

On Music Labels and Wesleyan

A: Given your business experience, and your involvement with the label you founded, Greenhead Music, how hard was it to release an album that goes against industry conventions?

HS: This goes for Kendrick, Action, Earl and whoever else is in this category. You have to fight tooth and nail it seems, at least from my experience, to get your vision out. I’m just glad it’s finally here because I had to wait for a year and a half.

A: What level of autonomy did you have on this release considering you aren’t on a major label?

HS: There were definitely a lot of conversations about the direction of the album, and I don’t know legally who was correct. But, it became the type of thing where if the label had a particular song they could probably put it on the record. I might make like fifty songs but I don’t want the label to get all fifty of them. I might just want the label to get the ten that I want them to get. And then two weeks later I might feel like those ten weren’t that good. But then ultimately it’s the label that says ‘oh this song is like this’ and they already have it on their computers and they’re the ones making the record.

A: One final question. Are you tired with people asking you about Wesleyan? Do you feel like people became too consumed with labeling you and Das Racist as that ‘rap group from Wesleyan,’ rather than allowing your music to stand by itself?

HS: I think that the idea that going to a good university and being a rapper shouldn’t be mutually exclusive and that idea is inherently racist. For white people and writers and executives to prefer that for some reason rappers shouldn’t have gone to college, that says more about them than about rap.

As far as Wesleyan goes, I don’t mind any association with that school. I probably wouldn’t have met the people that inspired me to make music if I didn’t go there. I’ve said it before, but if Andrew [VanWyngarden] and Ben [Goldwasser] from MGMT weren’t doing their thing I probably wouldn’t have felt like I could do our thing. Seeing them made it easier for me to wrap my head around what it would look like to do this.

I probably wouldn’t be around touring if I had went the Ivy route or the local New York route. For me, I’m pretty happy that I went to Wesleyan. I obviously have my issues with Wesleyan and I would have liked to have my South Asian Studies major approved, but they weren’t down with it. At the same time, I also would say that I wouldn’t be making music if I didn’t go there.