Roth Recounts Meeting with Board of Trustees to WSA 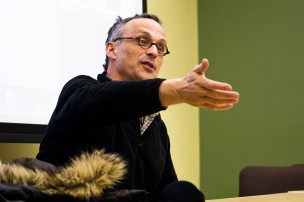 This is the first of a series of briefs from The Argus to summarize issues discussed at the weekly General Assembly meetings of the Wesleyan Student Assembly.

University President Michael Roth attended the weekly Wesleyan Student Assembly (WSA) General Assembly meeting on Sunday, March 1 to summarize the Board of Trustees discussion that took place on Friday, Feb. 27 and to answer questions from students and Assembly members.

Roth noted that the Board of Trustees meeting was focused primarily on restructuring the University’s debt, due to historic interest rates. The Board’s discussion was intended to produce ideas to alleviate financial pressures on the University in the near future.

In response to an audience member’s question, Roth commented on the power of WSA resolutions, stating that all resolutions receive feedback from the administration, either from the president’s office or from the specific department to which they are relevant. The WSA later discussed making those responses public to increase transparency about the resolution process.

Attendees also questioned Roth about the past two WSA meetings, which included discussion of inclusivity on the WSA, especially with regard to low-income and first-generation college students. Roth answered that the discussion had changed how he thought about the issue and that the University is in the process of reevaluating financial aid packages.

Related to those concerns, the WSA Executive Committee is currently looking for ways to make the WSA a more feasible time commitment for students who have work-study requirements.

During open forum, the WSA collectively acknowledged a need to be more proactive about ensuring effective communication between WSA members and the student body. One suggestion included having WSA members canvass the community to ask for feedback and concerns as well as to tell students what the WSA is working on.

The WSA Academic Affairs Committee (AAC) announced a focus on textbook costs, transfer student issues, and working to improve advising. The AAC will be hosting an academic fair on Monday, April 6, in Beckham Hall, specifically designed for first- and second-year students to ask questions and receive information about the various majors offered at the University.