Men’s Puck Ends Season with Pair of Losses to Bantams

Hoping to disrupt Trinity's five game win streak, Wes Hockey instead succumbed to the Bantams in a pair of home losses 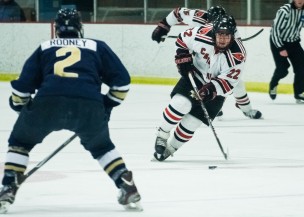 The men’s hockey team capped off its tumultuous 2014-2015 campaign last weekend with a home-and-home against Trinity (21-2-1, 16-1-1 NESCAC). The Bantams ranked second nationally in the latest D3Hockey.com poll. In recent years, the Cardinals (3-21, 2-16 NESCAC) have fallen short to the Bantams. Last season, the team from Hartford outscored the Cards 19-6, including a 9-1 thrashing in the first round of the NESCAC playoffs. The 2014 matchups showed some similar lapses in play from Wesleyan, something the skaters could not afford against a dominant Trinity side.

Prior to their last home game, co-captains Connor Ryan ’15 and James Albrecht ’15 were honored on Senior Day by the team for their contributions to the Wesleyan hockey program.

Hoping to get a marquee win and halt Trinity’s momentum going into conference and national tournaments, Wes took the early lead with just four minutes left in the opening period at Spurrier-Snyder Rink. James Kline ’17 placed himself in front of the crease, with Bantam bodies surrounding him, and, after multiple tries, finally pushed the puck across the red line. Fellow linemates Quincy Oujevolk ’17 and Alternate Captain Jay Matthews ’16 were credited with assists. Despite falling behind, Trinity controlled the momentum in the first period, outshooting Wesleyan 14-7, but came up short after firing shots off the post.

The Bantams would continue to dictate the pace of play in the middle frame, quadrupling the Cardinals in shots, 20-5. Trinity was only able to finish one of those 20 opportunities as Bradley Buvinow ricocheted a shot off the pipe, collected his own rebound, and struck the puck into the open net to knot the score at one.

The third period showcased four goals, all by Bantam-owned sticks, as Trinity ended the period and the game with a 46-17 edge in shots. Jordan Jancze ’18 took a tripping penalty five minutes in and Trinity capitalized just a minute later. Michael Hawkrigg got the pass just off the right side of goal, skated to the open slot, and ripped a slap shot over the glove of screened Wesleyan net-minder Dawson Sprigings ’17.

Trailing 2-1 with just under two minutes remaining, the Cardinals opted to pull Sprigings, and Conor Coveney of Trinity exploited the decision, sending a shot from center-ice into the empty net. With a two-goal lead and the game in hand with approximately 45 seconds left, Ethan Holdaway put salt in the Cardinals’ wound, scoring again with a top-shelf wrist shot to make it a 4-1 decision.

Wesleyan was 0-2 on the extra-man advantage while Trinity executed once on four chances. The Cardinals also took five penalties in the game, a number too high for a team that wants to win games.

Despite allowing three of the four goals, Sprigings has been a bright spot for the team, especially in the latter stages of the season. Between the pipes, he stopped 41 shots, which is an enormous amount for a goalie providing insurance for his team’s defensive lapses. Alex Morin, Trinity’s netminder, only had to make 16 saves in the game.

The following day at Williams Rink, the teams fought to the same result in the win-loss column, but this time by a much larger margin. The matchup was all Trinity and never in doubt, as the Bantams outshot the Cardinals 56-19. Trinity will now enter the NESCAC playoffs on a seven-game winning streak. Sprigings was not able to continue his success against an onslaught of shots, allowing four first period goals and two more in the second. Even with the goals scored against him, Sprigings made 36 saves during his 40 minutes of action. After the score was 6-0 Trinity at the end of two periods, Head Coach Chris Potter decided to give some time in net to third-string Daniel Weiss ’17. Weiss stopped all 14 shots he faced in the final period.

The first period concluded with the Bantams holding a 28-4 advantage in shots. Bantam Tyler Whitney took a pass and skated from end-to-end before being denied by Sprigings on the breakaway opportunity. The Wesleyan goaltender could not keep the puck and Whitney took the rebound and sent it into the back of the net. Ryan Cole doubled Trinity’s lead when he lit the lamp on a fast-traveling shot. Just five minutes later, Anthony Sabitsky, who assisted on the previous score, recorded his own goal with a wrist-shot that snuck by Sprigings. The Bantams would get their final goal of the period with just one second left on the clock. An odd-man rush situation gave Trinity a slap shot opportunity. Sprigings made the big save, but could not control it, and Liam McKillop crammed home the free puck as time expired.

Hawkrigg stole the show in the second period, giving Trinity its fifth and sixth goals of the contest. The initial score came when he forced a turnover behind the Wesleyan net and finished on his backhand, and his second arrived just 12 minutes later to finalize the score for the afternoon at 6-0. Trinity’s Nathaniel Heilbron and Kevin Green combined for 19 saves, and Wesleyan once again led in penalties with four, twice the amount of Trinity. Both teams were just a combined 0-3 on the power play and this was the fourth time this season that the Cardinals failed to score in a game.

The last time the team finished at the bottom of the conference standings was during the 2009-2010 season, when Wesleyan was 4-15 in NESCAC games. That season was also the most recent year that the squad failed to qualify for the postseason.

Wesleyan ended the season with the least goals scored per game at 1.50 and the most goals allowed per contest at 3.78 in the conference. They were also last in the power play department at just under ten percent. This struggle is to be understood with the team undertaking a depleted defensive core, often having five forwards on the ice at a time, two of which were playing out of position as defensemen. In addition, it didn’t help that Wes lost two of its top scorers, Keith Buehler ’14 and Tom Hartnett ’14, to graduation.

Kline finished the season as the team’s highest point scorer with 17, while Alex Carlacci ’16 amassed 11, leading the Cardinals with eight assists. Jancze led all first-years in points and goals with 10 and 4, respectively. Kline leads the team in career points among active players with 40 and Matthews’ 21 goals is a team-high among current skaters.

The Cardinals will only graduate two seniors, so the bulk of the team will be returning as well as the class of 2019, which will hopefully fit into the mix nicely. The experience and chemistry gained by this year’s team will be instrumental if the Cardinals are to return to the playoffs next season.