One student still hospitalized at Hartford Hospital, will survive "against all odds." 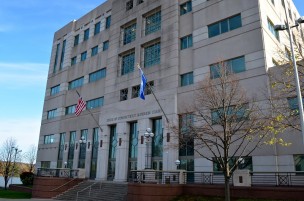 Four University students were arrested on Tuesday, Feb. 24. following a series of hospitalizations last weekend arising from drug-related complications, Middletown Police Chief William McKenna announced in a press conference on Tuesday night. The hospitalized students experienced adverse effects after consuming what they believed to be Molly/MDMA.

Middletown Police Lieutenant Heather Desmond announced in an email that, as of Thursday afternoon, only one student remains hospitalized at Hartford Hospital. The student’s family issued a press release on Friday, Feb. 27 saying the student will survive “against all odds.” The 11 other students have been released.

All four students were taken into police custody on Tuesday night and suspended by the University effective immediately, pending a formal hearing. The names of the students arrested have been released by the Middletown Police Department, but The Argus is refraining from publishing them as of now.

The arrest warrants for these four students were released by the Middletown Police Department on Wednesday, Feb. 25 and Thursday, Feb. 26, and indicated the results of the searches of the students’ residences. While conducting the search of the first student’s room, police and Public Safety Officers seized 516 assorted pills, as well as multiple unidentified powders and liquids. The authorities brought these substances to Rite Aid Pharmacy for identification, and a pharmacist was able to identify 16 different types of pills, all of which would require a prescription. After searching the residence of a second student, police located over 600 pills containing Alprazolam, a drug consistent with Xanex, as well as two yellow powered substances, one white powdered substance, and a bottle of small white pills containing drugs used to treat depression.

Three of the four students were arraigned in Superior Court on Wednesday, before posting bail and being released. These students will appear again in court on March 3. One of the students posted bond, and has a court date set for March 3 as well.

McKenna stated that the investigation is still ongoing.

“We have obtained arrest warrants for four Wesleyan University students on charges related to or associated with the recent campus incidents,” McKenna said on Tuesday. “All four have been taken into custody as of 8 p.m. this evening. Four search and seizure warrants have also been obtained from the court and have been executed at certain locations at and around the campus.”

According to the Arrest Warrant Application, at least one search of a student residence was conducted by Public Safety Officers without a search warrant but with the permission of Vice President for Student Affairs Mike Whaley. A Middletown Police Officer was present for the search to insure the safety of everyone present.

An all-campus email from Whaley on Thursday, Feb. 26 thanked students for their response to Sunday’s medical emergencies.

“In several cases, your quick intervention saved their lives,” Whaley wrote. “Thankfully, most of the students have now been released from the hospital and it seems all of them will survive the ordeal. Bystander intervention at work.”

Whaley went on to thank students who provided information about drug distribution on campus, which directly contributed to Tuesday’s arrests.

“Since Sunday, many of you have shared information about who may be responsible for distributing drugs within our community,” Whaley wrote. “We know you did this because you hoped to help save those in the hospital or because you hoped for a campus with fewer dangerous drugs. You too deserve our thanks.”

Middlesex County State Attorney Peter McShane, along with the Connecticut Forensic Science Laboratory, is currently working to identify the chemicals present in the drugs taken by the hospitalized students.

“This particular batch may have had a mixture of several kinds of designer drug chemicals, making the health risks unpredictable and treatment to combat the effects complex and problematic,” McKenna said.

Betty Aldworth, Executive Director of Students for Sensible Drug Policy—the Wesleyan chapter of which was re-established in 2013—released a statement Wednesday that declined to comment on the ongoing investigation but spoke against the management of drugs through the criminal justice system.

“Students for Sensible Drug Policy neither condones nor condemns drug use; we acknowledge that people use drugs regardless of prohibition and that drugs are best managed through public health measures and regulatory frameworks, not the criminal justice system,” Aldworth wrote. “At Wesleyan, one in 13 students was disciplined for a drug violation in 2013, proving that this scenario will play out again and again until we end drug prohibition and replace it with laws based on justice, compassion, evidence, and common sense.”

According to University President Michael Roth, however, it is too soon to tell if the incident will affect the University’s drug policies. Roth stated in an interview with The Argus that he does not anticipate making any drastic changes at this time.

“I think the policies we have have been pretty effective over the long haul in trying to point students toward making responsible choices, not overly policing them, while at the same time putting up pretty clear guardrails,” Roth said. “Right now we’re still focused on the recovery of students…and on the ongoing legal investigation, but afterwards we’ll have the chance to talk to student representatives about other things we might do that will make the community safer. It’s probably not good policy-making to do it right in the aftermath of a poisoning event.”

While Roth expressed concern about the students who were hurt, he did not feel the incident is representative of campus life or a wider campus problem.

“What we’ve tried to do in our communications since this poisoning that took place over the weekend was to be forthright in our communications with the campus community with what we knew, and where the dangers were, and also to express our sorrow and concern for the people who were injured,” Roth said. “Accidents happen at colleges and universities. People get hurt—sometimes because they do stupid things, sometimes because they’re unlucky, sometimes some combination of things.”

Roth stated his hopes that the community will be able to heal quickly in the aftermath of these events.

“I do think people are scared, but I think at the same time, we’ll get through this,” Roth continued. “Our reputation is that Wesleyan students care about each other.”

This article will be updated as the story develops. The Argus previously published a story on these events earlier this week.