Ninety students attended the WSA meeting on Sunday to discuss the issue. 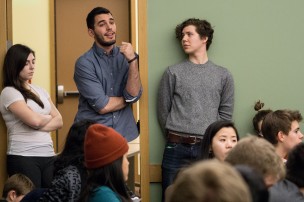 “I felt like last week was really more of an attack rather than trying to present ideas,” Cabrera said. “I felt like they were attacking [Martinez] and undermining his emotions and the emotions of first-generation students on campus.”

Brenda Quintana ’18, the other first-generation WSA member to walk out, echoed Cabrera.

“I want to be able to represent [marginalized] voices, and that’s why I joined WSA in the first place, because I wanted to be a first-generation student of color who could speak on those issues, and I couldn’t,” Quintana said. “I felt like I couldn’t bring myself to speak because it was us-and-them. And with me and Leah both having to leave the room, I felt bad; I felt really weak at that moment, like I couldn’t do much.”

Martinez also described his experiences at the Feb. 15 meeting.

“It really reached the epitome when one of the members referred to us as ‘those people,’ and at that point I just lost it,” Martinez said. “That’s essentially what happened [last] Sunday.”

The accounts of Cabera, Quinana, and Martinez resonated across campus and catalyzed a movement against the behavior of WSA members at that hearing. Martinez and Sadasia McCutchen ’17 created a Facebook event entitled “Shut. It. Down.”

“It’s time that people of color, low-income, first-generation, queer, and any other identifier that the WSA does not represent [band] together to enact permanent, long-lasting institutional change that requires these individuals to be accountable for their actions,” the event description read.

Some WSA members were apologetic following the Feb. 15 meeting and reached out to students who felt offended.

Madison Moore ’16, also a first-generation college student and a member of the WSA who was not present at the Feb. 15 meeting, spoke in defense of the purpose of the WSA.

“There’s a lot of issues on campus, there’s a lot of minorities and under-heard people who just don’t have a voice in campus politics, campus activities—everything to do with the campus—and it’s really important that the administration know about them,but it’s my feeling…that is what we [on the WSA] are there for,” Moore said.

Students at the Feb. 22 meeting brought up the difficulties that low-income students on the WSA face. For example, students who hold multiple jobs may not have time to attend the WSA’s weekly 3-hour meetings. WSA President Grant Tanenbaum ’15 shared the steps that the WSA has taken to be more inclusive.

“I think it’s valuable, some of the little things we’re doing to try to make this a little more accessible to students,” Tanenbaum said. “We’ve capped all meeting time lengths to sort of make it a set time schedule…. We’re also submitting our final proposal to the Financial Aid Office to create a stipend for WSA members on financial aid…. This has been something we’ve been kicking around for about a year now, but it is complicated.”

Throughout the meeting, students repeatedly called for calm and consideration in making comments, and asked participants to refrain from personal attacks. At one point, a WSA member requested a two-minute period of quiet to ease tensions. At this juncture, Martinez interjected.

“I do not want to be silent because you don’t want to deal with the issues that students face on campus,” Martinez said.

Moore acknowledged the intensity that the meeting reached.

“It’s always hard in a setting like this with so many people coming in and having so much anger and emotions,” Moore said. “It’s really hard to have a discussion that doesn’t turn into something that’s going to be hard to regulate and something that doesn’t overflow with emotions. Everybody wants to get their opinions heard, and we try our best.”

Like Martinez, McCutchen believes that the events of the Feb. 15 meeting are representative of feelings that have existed for a long time.

“What happened last Sunday was certainly the tipping point, but this was something that has been festering for a long time and this is something that [for] students of color [on] the student assembly has always been an issue,” McCutchen said. “Having people feel that the Assembly is actually representative—that doesn’t exist.”

Torii Johnson ’17, Wesleyan’s Quest Liaison and a first-generation college student, also spoke out about the WSA at the Feb. 22 meeting.

Martinez contended that passing the resolution only reflects political self-preservation by WSA members.

“Everything they wanted me to change last week [in the resolution], I essentially kept the same and it really shows you that they didn’t really look into it or really care about it; they just wanted to get through this,” Martinez said.

Moore added that he doesn’t think the discussion should end here. 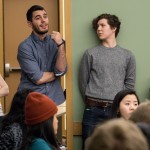 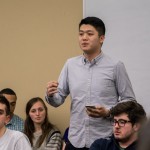 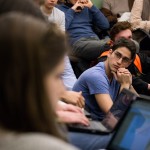 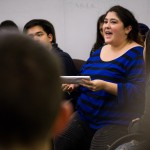 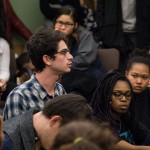 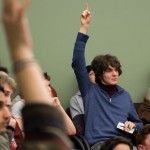 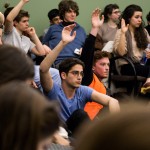