NPR’s “Serial” is Proof Positive of the Essential Relationship Between Art, Journalism, and Justice 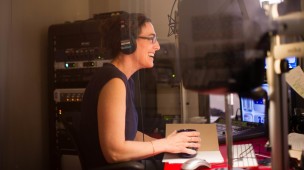 The world of podcasts is, in my experience, a generally unexplored realm for college-age students. A new development may break this pattern. This development is a podcast called “Serial” that has recently grown immensely in popularity and, outside pure entertainment, has even begun to have a significant impact on the world.

“Serial,” a twelve-episode podcast that was released in weekly pieces, began in October 2014. It was hosted by Sarah Koenig, a journalist and producer of the radio program “This American Life” that features essays and short stories in hour-long episodes.

The plot of “Serial” is an investigation of an actual murder case from the turn of the century. On January 13, 1999, Hae Min Lee, a high school teenager in Baltimore, disappeared after school. Three weeks later, a man discovered Lee’s body in Leakin Park, a site commonly known as a body dump. In February 2000, Adnan Syed, Lee’s ex boyfriend, was convicted to a life sentence.

Koenig begins an episode by asking individuals, specifically high school students, what they did exactly three weeks ago. Most respond, after some deliberation, with a sentence that begins with “I probably” or “I would have.” This, she stresses, is the critical dilemma with Lee’s case: the average teenager, or even adult, does not remember specifically what he or she did on a given day three weeks ago. Syed, for whom this day was completely average, does not remember what exactly he did: he simply knows his habits, and so he presumes he was at track practice, where attendance was never taken.

This crisis is one that will appear again and again throughout Koenig’s investigation. As she interviews classmates, teachers, family members, employees, and anyone who could have possibly been related to the case, she finds that it is almost impossible to recall a specific average day. Add fifteen years to this request, and the level of recall is incredibly low.

The case came to Koenig through Rabia Chaudry, the older sister of one of Syed’s best friends. She had come across some articles in the “Baltimore Sun” written by Koenig about Christina Gutierrez, Syed’s defense lawyer during the case, who had been disbarred after mishandling client money. Chaudry and her brother suspected that Syed was innocent and that Gutierrez had thrown the case in order to win more money, and she emailed Koenig with this suspicion a year before the podcast began.

“Serial” records Koenig’s research process in scrutinizing detail. She includes interviews with lawyers, policemen, friends, and family members, and people with whom Adnan communicated for maybe five seconds fifteen years ago. She goes through certain routes, timing them to the minute to assess whether they match witness’ reports; she researches cell phone records, library sign-in sheets, security camera videos, and 30-year-old blueprints. This thorough and extensive investigation is recorded for anyone with Internet access to hear.

A common critique of the show, which rang true for me when I listened to the episodes, is that Koenig seems generally biased in Syed’s favor. Despite repeatedly claiming that she is not defending him and simply wants to find the truth, she has become close friends with Syed and his family and friends, with whom she keeps contact throughout the episodes.

During her phone calls with him, many of which she plays for podcast listeners during the episodes, she is supportive and encouraging, suggesting that her quest is more to prove his innocence than to discover what actually happened. She does, however, acknowledge that she sometimes suspects she could be routinely talking to a psychopath who is tricking her with his affable, charismatic personality.

Koenig’s biases aside, the show’s addictive quality cannot be denied. “Serial” echoes the way that many crime shows tap into our morbid fascination with murder and criminals, as well as the emotional aspect of each case and the temptation to root for certain characters. In fact, a coffee shop near my house divided its tip jars so that customers could choose whom they suspected had committed the murder.

The feeling is intensified by the fact that these events actually happened, not to mention that they are still happening. On February 6, Syed won a motion to appeal on the claim that Gutierrez had provided inadequate legal defense. A panel of judges will hear oral arguments in June, without new evidence, and decide whether to grant Syed further relief, either through a new trial or simply presenting evidence to the court.

The podcast played a role in appeal: one of the crucial witnesses whom Koenig contacted (and whom Gutierrez did not) finally came forward with an affidavit after realizing the weight of her role in the case.

The second season of “Serial,” which will begin later this year, will focus on a new case. Who knows, maybe Koenig’s crusade for truth will continue to provide testament to the power of journalism.