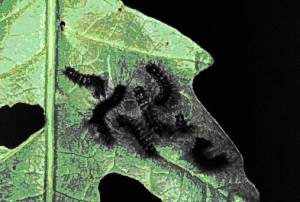 Every summer, students from Associate Professor of Biology Michael Singer’s lab hike Mount Higby, a site only a few miles from campus with wildlife ripe for study. In a forest humming with activity, the students investigate trees for resident caterpillars. Through research on caterpillars’ diets, they uncover a complex web of interactions between plants, animals, and their environment that affects every organism in the ecosystem, including humans.

Singer and his students discovered that the diet of caterpillars influences their predation. While some caterpillars are generalist eaters and consume many different types of plants, others specialize to a particular host plant, like kids who cling to white bread and pasta for their sustenance.

In contrast to humans, who are picky eaters, caterpillars that specialize have an advantage over those that don’t.

“We’ve found that more dietary specialist caterpillars were really pretty protected from bird predation by virtue of their various kinds of ways of using their host plants for defense,” Singer said.

For example, caterpillars use camouflage to evade capture by predators: they can hardly be distinguished from the leaves of their host plant. They may also consume chemicals from their host plant that are toxic to predators, then advertise their unpalatability through bold coloring.

Both birds and trees, therefore, prefer generalist caterpillars. Birds have an easier time finding their meal (Can you imagine if your dinner blended so well into your table that you couldn’t see it?). Trees benefit from birds’ increased predation of caterpillars that eat their foliage. This knowledge can help inform bird conservation efforts because certain tree species are more likely to host generalist caterpillars.

The dietary choices of caterpillars have other surprising consequences. For instance, Singer found that the woolly bear caterpillar eats toxic plants to fight off attack by parasitic flies.

The woolly bear caterpillar takes up the role of medicine man, prescribing for itself leaves that contain toxic chemicals that can be harmful if taken in too high doses, similar to chemotherapy. These caterpillars endure the medicine because defense against parasitic flies is a matter of life or a science fiction-caliber ghastly death. The parasitoids, organisms that require a host for their development, lay eggs on or inside caterpillars. The offspring develop inside the caterpillar and then scrape their way out of their host, “Alien”-style, killing it.

“This happens all the time with insects; fortunately, not with people,” Singer said.

Singer found that caterpillars self-medicate by increasing their intake of toxic plants in response to attacks by parasitic flies.

Although the woolly bear caterpillar can alter its diet for defense against the parasitic fly, Singer’s lab also studies a wasp parasitoid that can manipulate the caterpillar’s diet toward a carbohydrate-biased diet to benefit its growth inside the caterpillar.

“It seems that this one caterpillar in some cases can use its diet to defend itself against the flies that attack it, but against the wasps it really seems like the wasps have the upper hand, so that’s been another really interesting twist in the system,” Singer said.

This finding supports the manipulation hypothesis: that some parasites manipulate the behavior of their host. A famous example of this is the parasite T. gondii, which causes toxoplasmosis. That parasite’s preferred host is the cat, so it changes how rats experience the smell of cat urine to attract rats—and the parasite—into the jaws of cats.

Rob Clark, a graduate student in Singer’s lab, studies the behavioral consequences of a mutually beneficial relationship in which ants provide protection to tree-dwelling sap-eaters in exchange for a sugary reward. Clark found that ants are more likely to prey on caterpillars when they have sap-eater mutualists than when they don’t. The most obvious explanation would be that ants receiving food from sap-eaters proliferate and therefore consume more caterpillars, but Clark has found this not to be the case.

“There actually isn’t a significant effect of sap-eaters on ant abundance,” Clark said. “It’s another really interesting result that changes in behavior are probably what’s behind this.”

One behavioral explanation is that the ants seek to balance the carbohydrate-biased diet that they get from the sap-eaters.

“The workers are being told through pheromone communication from the colony, ‘Okay, we have a ton of carbohydrates; let’s get some proteins and lipids,’ and you get those from prey,” Clark said.

Another theory is that the ants attack more caterpillars because they act hyper-aggressively in order to protect their sap-eater mutualists.

“Ants are just attacking anything that moves on host plants, and that has happened to me, where there are carpenter ants tending aphids on beech trees and I put my arm on it and they all started attacking me,” Clark said.

Because ecology is the complex web of interactions between all organisms, this basic ecological research also extends to us.

“Humans really rely on ecosystems for all kinds of services like clean water, clean air, soil fertility, pest control—all of these things that we depend on but we’ve always taken them for granted—but we’re getting to the point now where some of those things are getting diminished in a way that humanity feels,” Singer said.

Humans play an important role in shaping the ecosystems around us, and ecosystems in turn shape our lives. As we grow more aware of the negative impacts of our own actions, it becomes more important to understand these ecosystems.

Singer stressed that the study of basic ecology is undervalued by society and essential for solving ecological and environmental problems.

“From that fundamental research…you might be able to have some direct applications to problems that we experience now, but you are also providing a base of information and knowledge that can be used for problems that we don’t foresee,” Singer said.