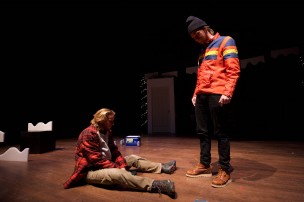 The skits of “Almost, Maine” have the cozy feel of a local dive bar: particular in the native vernacular and the seemingly unconnected lives of its denizens, but universal in the lust and loneliness that permeates the people inside. Written by John Cariani and performed in the ’92 Theater from Thursday, Feb. 12 to Sunday, Feb. 14, the play focuses on the isolation of small town Maine, where work is slow and the bar is always open, performed as a series of vignettes that mediate on the frustrating, humorous, and often times futile aspects of love.

The show could not have opened at a more opportune time than Valentine’s Day. Allison Gross ’18, who attended the production, reflected on the timeliness of the play’s atmosphere.

“It made me feel again,” Gross said. “I didn’t realize how lonely I am. ‘Almost, Maine’ confirmed that, while wisdom may come with age, awkwardness does too.”

“The cast was wonderful, and amazing to work with, and I’m really thankful that Rachel let me be a part of the project,” Caruso said.

Kaly and Caruso attempted to steer “Almost, Maine” from the pitfalls of sappiness and monotony that plague many small-town romance stories, and mostly succeeded through the bluntly effective humor of performers such as Billy Ireland ’17 and Peetie McCook ’16, both of whom drew upon the comedy chops they honed as members of student sketch comedy group Lunchbox.

In one of the most intense and ultimately hilarious skits, Ireland and McCook play two men who are ice-fisherman and best friends, enjoying a cold beer after a hard day’s work. Ireland turns a riff about dissatisfaction and his inability to truly love anyone into a revelation that the only person he loves is the man sitting right next to him. The two begin to struggle with their mutual identity crisis and end up “falling in love”—quite literally, as they immediately collapse every time they stand up. Even if the play’s attempt to drive home its central themes is somewhat cumbersome, it still comes off with appealing dysfunction and physical humor.

Elsewhere, Ireland and Roxie Pell ’17 explore the intricacies of “the friend zone,” as Ireland attempts to convert his buddy-buddy friendship into a romance. It’s a delight to watch Pell, providing a hard-nosed counterpart to Ireland’s goofy charm, recoil but ultimately embrace Ireland’s advances. As the two begin to undress and fall down while removing about six layers of clothing, the play connects in a tangible and satisfying way.

The duo of Ireland and Pell reconnect later in a scene where Ireland plays a local deadbeat drinking alone, when he encounters his ex-girlfriend, played by Ali Goldberg ’15, and her bachelor party. To see the relationship between Ireland and Pell, his waitress, bloom at the height of Ireland’s humiliation is genuinely heartening.

Although the writing in “Almost, Maine” can appear overly sentimental to a fault, perhaps the play’s greatest strength is the manner in which it depicts the intimacies between characters with long histories. Equal parts clumsy, humorous and passionate, Pell, Ireland, and McCook guide the play’s lighthearted sensibilities. These vignettes depict unconventional romances and refuse to shy away from their character’s blemishes, as well as the dysfunctional humor that accompanies them.

While the more mundane love stories in the play fail to strike the same chord as its more peculiar romances, Dan Froot ’16 and Carly King ’18 develop the idiosyncrasies of their characters adroitly. In one scene, Froot plays a loner at a laundromat who cannot feel pain, and King acts as a comedic foil by slapping him with her ironing board and quizzing him about his malady. The two investigate a world without pain, and the tediousness of deciding what to actually fear. The end has a sweet twist as Froot’s character falls and remarks with wonder, “Ouch.”

“Almost, Maine” unfolds in a similar way. By exploring the inner-workings of a decidedly ordinary town that is supposed to be comprised of remarkably complicated citizens, it can first appear slightly aimless or ham-fisted, but ultimately triumphs as a result of its sheer humor and the depth of its feeling.