The Wes men’s hockey team donkey-kicked Colby in a 2-1 overtime victory, before losing to Bowdoin. 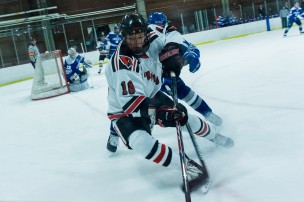 Valentine’s Day weekend for the men’s hockey team (3-19, 2-14 NESCAC) consisted of a pair of games against squads from Maine, starting with a rematch against Colby (5-14-3, 2-11-3 NESCAC). When the two teams first played in January at Alfond Arena, the Mules came out on top, 5-2, despite Wes scoring the opening goal. That loss put the Cardinals’ all-time record against the Mules at 5-22-3.

The second game provided a much different outcome, with both teams having a lot to play for. Colby was fighting for the final playoff spot in the NESCAC tournament while Wesleyan was trying to crack a 14-game skid.

“I think that we displayed progress,” said forward James Kline ’17. “We have been working hard all season and it paid off during our win against Colby.”

The Spurrier-Snyder Rink hosted a thrilling matchup as the Redbirds once again took an early lead when Kline received a pass from Alternate Captain Jay Matthews ’16 and fired a wrist shot from the left-circle over the shoulder of Colby netminder Sam Parker. The initial tally came with just 50 seconds remaining in the first frame.

“I had some speed coming down the right side of the ice and was able to get a hard shot off when I cut to the middle,” Kline said. “I tried to use the defenseman as a screen, and I think that made the shot more challenging for the opposing goaltender.”

The second period provided a plethora of chances for both teams, as each goaltender made double-digit saves throughout the 20 minutes. Dawson Sprigings ’17 played his best game of the season, statistically speaking, allowing his first and only goal of the contest with under a minute left in the second. Mule Cam MacDonald got a pass at the point and slapped a firecracker top-shelf over the left shoulder of Sprigings.

The third period offered similar excitement, with both teams creating many opportunities to score. On more than one occasion, the Wesleyan goalie made acrobatic stops with his pads and glove, while his Colby counterpart was able to prevent the Cardinals from scoring at point-blank range. The game was headed for overtime, with each team desperate to see the opposing goaltender lose his focus for a split second.

Wesleyan received some extra energy from the bleachers during the overtime session as a bunch of shirtless Cardinal fanatics cheered in support of their hockey players. With just under two minutes before a tie would be declared, Kline got control of the puck in the Wesleyan zone and saw an undetected Matthews waiting at the blue-line, hungry for the puck. Matthews controlled the pass and all that was left for him to do was beat the goalie. Parker decided against coming out of the net and sat in the crease. Matthews snuck an efficient wrist-shot under Parker’s glove, and the next few seconds were a blur as the whole team paraded onto the ice in celebration of the victory.

“I was overtaken by excitement,” Kline said. “Jay really stepped up for the team when we needed it.”

Although the Cardinals were outshot 38-28, in the end it did not influence the outcome. Sprigings was masterful during the contest, stopping 37 of 38 shots that came his way for a .974 save percentage.

Wes tried to carry its momentum into the following day for a matchup with Bowdoin (13-6-3, 7-6-3 NESCAC), a team that the Cards have only beat four times since 1976. The squad’s first game with the Polar Bears last month was one of its toughest losses of the season. The Cards were up 3-0 before surrendering four straight goals for a tough-to-swallow defeat.

Bowdoin needed a win to stay in the race for a home playoff game after a tough 5-4 loss the day before to a Trinity team that is currently the best in the conference and nationally ranked. The Polar Bears got off to a quick start, taking a 1-0 lead after a shot from far out could not be corralled by Sprigings, and Camil Blanchet tapped the puck into the empty net.

The second period saw the Polar Bears double their lead as John McGinnis converted a shot from the slot on assists from Brendan Conroy and the polarizing Connor Quinn, who is currently in the top-10 in the conference in points. The goal came on the power play after Quincy Oujevolk ’17 was sent off for two minutes for roughing.

The Cards would continue to fight, trying to put back-to-back wins together for the first time in the 2014-15 campaign. Jordan Jancze ’18 cut the deficit in half midway through the final period with his fourth goal of the season. The forward screened the goalie in front of the crease and deflected a shot from the point that came from Alex Carlacci ’16. The puck went through the five-hole of the Bowdoin netminder and gave the Cardinals a much-needed boost. Alternate Captain Eric Casey ’16 also earned an assist on the goal.

Just over three minutes later, the Polar Bears sent the Cardinals on the final path toward defeat. Zach Kokosa ripped a hard shot from the right circle that flew over Sprigings’ glove to give Bowdoin a two-score advantage, a tally that would ultimately sink the Redbirds.

Wesleyan’s loss shadowed the fact that Sprigings once again played fantastically, making 40 saves that afternoon. The Bowdoin netminder had a relatively relaxing game, only seeing 17 shots come toward his igloo, and stopping 16 of them.

“Both teams we played this past weekend were very skilled,” Kline said. “Dawson played extremely well and kept us in both games.”

The Cardinals will finish up their season next weekend with a home-and-home against interstate rival Trinity. The Bantams have only lost once in the NESCAC this season, and Wesleyan’s last win against Trinity came in 2013.

“We need to be at our best in order to beat Trinity,” Kline said. “They are a very difficult team to play against and definitely one of the strongest opponents that we will have faced all season. The key to beating a team like Trinity is to simply out-work them.”