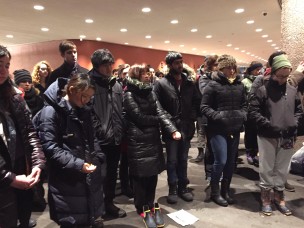 A vigil in the lobby of Exley Science Center on Sunday, Feb. 15 brought together members of the University community to mourn the murder of three Muslim students near the University of North Carolina at Chapel Hill. The event consisted of a three-minute silence—one minute for each victim—and an open space in which people shared prayers, speeches, and thoughts.

Hazem Fahmy ’17, one of the main organizers of the event, wanted to honor the victims—Deah Barakat, Yusor Abu-Salha, and Razan Abu-Salha (ages 23, 21, and 19, respectively)—and provide an outlet for people to express their grief and solidarity.

“Many, many members of the Muslim Arab Middle-Eastern community are hurt by this, are grieving for their deaths, including me personally, so I wanted to have an outlet where we could come together and express our grief for them,” Fahmy said.

Many students believed that the murders were not portrayed accurately by the mass media.

“The terrible thing about the event is that it’s a double tragedy: the first being the actual murder of the victims, the second being that almost no major media outlet has described it as what it was, or gave it enough coverage,” Fahmy said.

Major media outlets such as CNN have questioned whether or not the three victims were shot because of a hate crime or a longstanding parking dispute with the neighbor who eventually killed them. Another issue that resonated with the student organizers was the lack of the use of the words “terrorism,” “hate crime,” and “racism” in the reporting of the event.

Sahar Shaikh ’17, a member of the Muslim Students’ Association, was happy that people came out to support the community. She found the event to be inspiring.

“I think that [the shooting] was a really horrible event,” Shaikh said. “The fact that it only became a big deal because of social media, and that news outlets weren’t pushing this themselves, says something about how Muslims are looked at in the country.”

The event’s organizers also aimed to draw attention to the broad scope of discrimination that is still prevalent in the United States.

“I also wanted to do this event to raise awareness about the issue because this is not a problem that is exclusive to the Muslim Arab Middle-Eastern community,” Fahmy said. “This happens all the time with people of color and marginalized groups.”

Sarah Rahman ’16, who spoke at the event, said that she felt that the media’s portrayal of the Muslim religion is often inaccurate and damaging.

“I feel like it’s really important for me to speak out,” Rahman said. “Especially with me being Muslim and knowing that none of that is true. With us feeling even more oppressed and more unsafe, I feel like we’re all one and we’re all the same, and we all need each other.”

Shaikh added that she hopes the rhetoric used in reference to the Muslim community can change into a more positive and open-minded one.

“I would really like to change the way the Muslim community in America is talked about, like with people automatically assuming that because you’re Muslim, your ideals or the way you grew up was too conservative or too backwards,” Shaikh said.

Rahman said she felt a personal connection to the story because the two sisters who died were the same age as she and her sister are and were also university students.

“I was very heartbroken to see that, me being an American, I don’t have the same rights as any other American,” Rahman said. “Since when did that happen?”

During the vigil, University students also spoke openly about the incident and shared prayers for the victims. One student, originally from Chapel Hill, talked about responsibility and how people should be taking action, and that the next time they see someone being harassed, they should do something or say something about it.

Fahmy talked about how a vigil like this shows how strongly engaged students are.

“[Students] are always interested in these kinds of issues,” Fahmy said. “They always show their condolences, ask questions, and resonate with these things even if they’re not personally, through their identities, connected to them.”

Rahman added that these students’ deaths resonated with students regardless of their background.

“These were young university students who were just like every student in school, so who cares about what their religions and backgrounds are?” Rahman said. “They’re students and they had bright futures ahead of them, and that was just stripped away.”