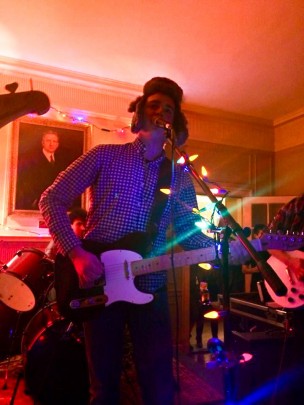 I walked down to Clark 4 to interview Wesleyan’s newest and most prominent freshman band, The Sneaky Sugars (formerly known as C4). As I arrived, a small plastic object whizzed by my head and stuck to the wall; if the quartet was nervous about their first interview, they weren’t showing it, as I realized when I interrupted a Nerf Gun fight between lead singer/rhythm guitarist Ryan Guarino ’18 and bassist Jack Maraghy ’18.

Being newcomers to Wesleyan’s music scene can appear a daunting obstacle for any group of aspiring musicians, but The Sneaky Sugars members decided to take matters into their own hands and formed a group comprised of various members from the fourth floor of Clark Hall. There’s Guarino and Maraghy, as well as funky lead guitarist Karina Caban ’18 and drummer Max Cembalest ’18 (who lives in the Nics). While fortuitous rooming selections facilitated the band’s formation, The Sneaky Sugars’ creation was spontaneous, and due in part to the nurturing of a band with a more established campus presence, Music For Drunk People (MFDP), who took the Sugars under its wing.

“We became a real band only a week before the DKE show,” Caban said. “Before that, we were just jamming last semester.”

“We became a band before we became a band,” Guarino said. “I was hanging out with Jack and MFDP and they asked me to open for them. I didn’t know what that meant and I kind of just said yes.”

“Ryan and I had the gig first, and then we realized we needed an actual band to play with,” Maraghy said.

Just a week before their opening, the band had to scramble to live up to their billing on Facebook as “the self-proclaimed greatest two-week-old rock band of all time.”

While Caban talked about the hard work that goes into putting their set together, Jack and Ryan resumed their Nerf fight and playfully joked around.

The band’s cohesive set was developed by Guarino and aided by a group who share similar musical sensibilities and expectations concerning the nature of the band’s demographic.

“Basically, anything people can bump to,” Caban added. “It’s a mixture of alternative rock with punk and funk influences.”

The Sneaky Sugars showcased its new sound in a surprisingly polished set at DKE, where they played for a crowd that contained many freshmen eager to watch their classmates’ inaugural show. Backed by Caban’s commanding guitar riffs on crowd favorites such as “Take Me Out,” Guarino’s performance was reminiscent of The Strokes’ lead vocalist Julian Casablancas, and he displayed the cool demeanor of a veteran performer.

Assisted by Caban’s and Maraghy’s understated, workman-like personas, it was when Guarino began to feed off the energy of his audience during crowd pleasers such as “Mardy Bum,” and a Sneaky Sugars original, “I Fall Around,” that the band’s sound reached its high point. Their funk-inspired take on alt-rock classics is a welcome addition to the Wesleyan music scene, which already boasts another funky ensemble band, Chef.

After The Sneaky Sugars’ successful show at DKE, they realized the name C4 was not cutting it anymore, and it was time to reinvent themselves.

“And even the stuff you don’t want it to mean,” Maraghy adds.

As The Sneaky Sugars continue to branch out and expand their sound, they intend to develop the band by potentially featuring a fifth member more prominently, Luke Davoren ’18, who plays the keyboard and is another denizen of Clark 4. The group is increasingly focused on creating original pieces like “I Fall Around.”

The band plans to play more shows at DKE and has an upcoming performance at Art House on Friday, Feb. 13, a more intimate venue that usually features a crowd of audiophiles well-versed in alternative music.

“After our upcoming show at Art House, we tentatively have two more DKE shows lined up,” Guarino said. “We would be opening for Swipe Right and MFDP.”

The band cites the congenial nature of bands such as MFDP and Swipe Right as a vital reason why they have been able to make such an immediate impact.

“MFDP has really kind of linked up with us,” Maraghy said. “As we interact with these older bands, it’s a lot of networking for the future.”

“That’s a big thing, because MFDP asked us to be their official opener. So from now on, we get that first call,” Guarino said. “With Swipe Right, I was their drummer last semester. You need to know people. That’s what it essentially comes down to if you want to get into one of these bands. It’s really hard for a freshman, maybe even a sophomore band, to find their own way without the help from an older band.”

As The Sneaky Sugars look towards the future, their goals are equal parts earnest and ambitious.

“We want to ‘sneak’ our way to the top,” Caban said with a sarcastic smile.

As Guarino aims his Nerf Gun at one of his roommate’s posters—“Keep Calm and Carry On”—Caban added, “We want to take over.”