The first-ever collaboration between the Zilkha Gallery, the Davison Art Ceter, and the Freeman Center for East Asian Studies combines photography and dance to represent trauma. The exhibit, curated by Wesleyan faculty, will be open through March 1. 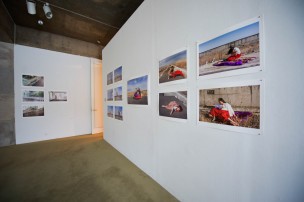 Perhaps the worst type of tragedy imaginable is that caused by human ignorance, by society’s gross misconceptions, and by individuals’ apathetic egotism. In 2011, a tsunami over 130 feet tall hit Japan. The disaster would have ended terribly enough had it just caused death and physical destruction, but it caused even more unforgettable, unforgivable destruction with the level-7 nuclear meltdown of the Fukushima Daiichi Nuclear Power Plant.

When photographer William Johnston (Professor of History, East Asian Studies, and the Environmental Studies Program) and dancer/choreographer Eiko Otake (Visiting Instructor in Dance) undertook the task of reminding people of this nuclear catastrophe, they faced the familiar challenge of art representing trauma. Their creation, a series of photographs that capture Otake’s agonizing performance against a backdrop of the now-desolate Fukushima, is intensely reflective, imposing and, above all, cautionary.

“Really, this kind of work is without categories,” Dowdey said. “You’ve seen a lot of disaster photos, but you’ve never seen anything like this. It helps you do what Eiko really wants you to do, which is to stop—she uses the word ‘hesitate’—to think about the images.”

Known since 1972 for her collaborative performances with partner Takashi Koma Otake (the two are known professionally as Eiko and Koma), Otake brought a singular style of dance to her audiences, one which she now brings to the camera, characterized by extremely slow yet theatrical movements, often accompanied by lighting and sound. Her face remains solemn and sorrowful throughout her performance, and her body shakes occasionally between positions, bringing out a sense of vulnerability.

Otake regards herself as a “place-based, time-based artist,” and as such, time, space, and distance play a crucial role in her performances.

“Time is not even,” Otake said. “Something happens. It shakes you. You try to forget it, but you have an inner voice [that says] you don’t want to forget. Space is not empty. It’s not a theater or the dance studio where we should only dance. Things happen in places…. Distance is malleable. I want to use my own body as if it were a string so my students and my viewers can actually step over my body and get to other places and then come back.”

This refusal to forget, refusal to let go, and the urge to form a connection between Fukushima and the rest of the world are what brought Otake and Johnston back to the district during the winter and the summer of 2014. The desolation of the city proves haunting when captured in photographs, but it was even more appalling to Otake and Johnston when they experienced it up close. The sceneries that they brought back are beyond heartbreaking: abandoned houses of families who can never return, waste dumps of perfectly functional but radioactive items, and destroyed train stations that are overwhelmed by plant overgrowth due to radiation.

“We were so sad to see these places where you can see people’s lives and how they had been destroyed, on the one hand, by earthquake and tsunami, and on the other hand that they couldn’t come back to clean them up,” Johnston said. “It’s one thing to be facing natural disaster, but it’s another thing to face a disaster where you can’t go back to your house and straighten things out. It’s gone, and you can’t touch the things because they are radioactive.”

Placing Otake, her gestures, her expressions, and her body shapes, inside these bleak settings adds another dimension to the pictures on top of the sorrow. Otake’s lone presence in the photographs does not attempt to maintain a sense of reality in representation. Rather, her performance is obviously dramatic, her placements often odd and unnatural, and her loneliness in the photographs draws viewers’ attention to the empty space in a purposeful, reflective way.

“These are not your standard photographs,” Rogan said. “You really have to understand that this is not news photography. This is not truth in a photographic sense, no matter how much we might put the word ‘truth’ in quotations. This is a performative project, an emotive project, and a reflective project.”

In some photos, the flamboyant colors of the cloths Otake holds become the focal point of the pictures, and this focus motivates a theatrical contrast between Otake’s small body and the vast, vacant, seemingly infinite landscape behind her. In some others, visibility is denied. Johnston takes away the horizon line and all the viewer can see are Otake and an endless background of either the sky or the green overgrowth on the ground, as if the moment in time is permanent. There are also photos in which Otake’s body blends in with the background of waste and ruins, and Johnston allows the graphic, sculptural shapes of the setting to impress the viewers with a sense of destruction.

These photos, however, don’t simply function as a record of a theatrical performance in front of settings with dramatic potential. They also serve to remind the viewers constantly that the settings are real, and that the destruction is irreversible. The series is clearly expressive and opinionated. It not only reflects Otake’s and Johnston’s attitudes toward the devastating event, but also further poses a question and a strong caution to the viewers about the cause of such devastation.

“[T]he photographs help you do what Eiko talks about, hesitate, to meditate on human negligence, not just other people’s but our own,” Dowdey said. “She talks about her remorse in this project for not having done more to oppose nuclear power.”

Through the photographs, Otake and Johnston bring Fukushima to the world in a way that ignites awareness of our fast-growing world. This is a world in which danger is becoming more and more accessible. The series reminds people of the destruction such danger can achieve and, more importantly, brings that potential of danger home to the viewers. It renders human negligence a personal, universal issue.